A new chapter in his quest to preserve the Jamdani legacy 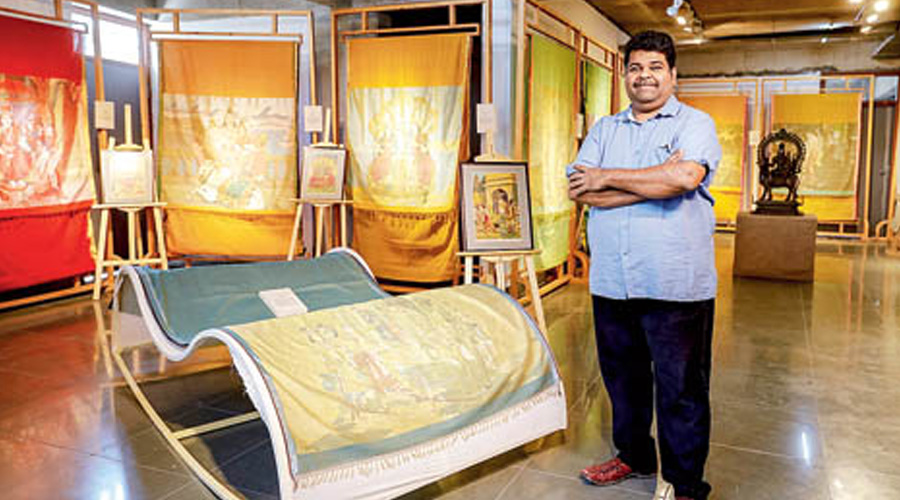 Continuing his work in the realm of keeping the legacy of jamdani alive, Gaurang Shah’s latest venture Interlace at the Crafts Council of Telangana (CCT) features a museum-like display of 65 exquisite Indian handwoven saris, including the ones recreating paintings of Raja Ravi Varma in the pallu, and a live demonstration of the art of jamdani weaving.

As a part of the inaugural show at CCT Spaces, an initiative by CCT, Interlace opened doors on December 8 with this extravagant exhibition showcasing the poetry of jamdani and tapestry weaving techniques.

CCT Spaces that has been conceived as a one-of-its-kind platform to showcase their work dedicated to ‘Handmade in India’ also features a craft wall in the atrium that depicts traditional craft that is accessible and can be architectural showpieces. CCT Spaces is set to further the cause of craft communities making a viable living through meaningful partnerships. Their goal is to strengthen livelihoods, preserve traditional artisanal skills, ensure sustenance and develop systems that will create all-around progress within the Indian art ecosystem.

Interlace featured works from projects by Gaurang such as Khadi — A Canvas (khadi saris with woven pallu’s of Ravi Varma’s paintings in tapestry and jamdani techniques) and Sangraha — An Anthology of Jamdani featuring timeless classics from Dhaka, Kasi, Kota, Srikakulam, Uppada and Venkatgiri, created directly on the loom. The display line-up included Meeth, the exquisite fusion masterpieces, and Gharohar with tapestry and saris from Paithan and Kashmir, which highlight the incredibly time-consuming ancient technique of tapestry.

“As a designer, I have often wondered what makes jamdani such a captivating canvas to many and me, especially. After 20 years of working with weavers across India, I have found a layered answer. There is, of course, the legacy. Every piece you have seen today is my homage to the past masters who created jamdani by infusing tradition with a spirit of experimentation,” said Gaurang about the showcase.