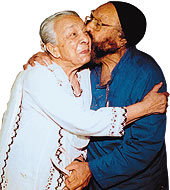 Zohra Segal: I was being interviewed by BBC once. There was this interviewer — a dishy young man like you [she looks at Khushwant Singh]. He wanted to know the secret of my exuberance. I said: sex! The audience started laughing. Then he asked: What are your hobbies? I said I love to do crossword puzzles.

KS: Crossword puzzles! I do five or six every day.

ZS: In a week I do one — the cryptic one. See, that is the difference between Khushwant Singh and Zohra Segal. Anyway, I said that I like to read detective books because they are very exciting, and there’s a lot of sex in them, and I like to compare notes.

KS: Oh well, I like to read pornography which is much the same. [Laughs.] I ascribe my old age largely to my parents. My father was 90. He had a glass of whisky in his hand and said “I’ll just lie down for a minute.” And he went — that was one for the long road. And the last thing my mother said at 94 was: “Whisky!” I always remember Iqbal: You want to ask me the signs of a man of faith? He dies with a smile on his face. I’ve been through what I’ll describe as a near-death experience. Last year, I suddenly fell in the afternoon, with no servant around. As I crawled about like a crab, I thought the time had come. So I said, all my life I have denied the existence of God. I’m not going to pray. And believe it or not, all I thought of were my unfinished assignments. And I thought of Iqbal. Why did you throw me out of the garden of Paradise? Sara jahan daraaz hai, ab mera intezar kar. So I told the Bade Mian up there: I have work to do.

ZS: Bilkul. I consider religion to be like a book. There is so much strength in each of my fingers, my nerves, my veins. That’s God, that’s everything... Koi usko khuda kehta hai, koi rab kehta hai.

KS: Well, I call him a gas balloon. [Both laugh heartily.]

KS: Achha Zohra, tell me, have you any unfulfilled regrets?

ZS: It’s not really a regret. I was a good dancer. As the saying goes, Jawaani mein aur moonlight mein to gadhaiya bhi khoobsoorat lagti hai. So when I was young. I was attractive in that way.

KS: I saw you young — across the stage in London. But I didn’t have the guts to go up to you.

ZS: My sister, who was really a beauty, and I became well known as dancers. I’m a good actress. But there are so many who are more talented than I am. But I think I would have been excellent as a teacher.

KS: But you also have a very remarkable memory. I’ve heard you could recite Urdu poetry by the yard for an hour without a scrap of paper in front of you.

ZS: It’s part of my routine life. Every evening, I go up to the terrace and recite poetry. Urdu and English. Children’s poetry, Faiz, Sardar Jafri or maybe the revolutionary poets.

KS: Oh, I have lots of regrets. As I young man I was hoping I’d become a tennis champion. I tried swimming the English Channel, but gave up after half an hour. Then I wanted to become a great writer. That went half-way — I remained a big hack. That was a regret but other things took over — the disillusionment with the country. I was one of those who crossed over during Partition. But it didn’t bother me one bit, because of a sense of euphoria. We’d create a new India on the pattern that Gandhi had dreamt of. There’d be no Hindu-Muslim violence. People would live in peace, honestly, modestly. Now, one after another, that’s been belied. And it’s broken my heart. The last but one book that I wrote — The End Of India — meant the end of my illusions about India. Now I have written one book [Paradise and Other Stories, slated to be launched on Tuesday] which is on the resurgence of irrationality, occult, astrology — all this kind of bunkum. It sucks. Bullshit.

ZS: An astrologer had once looked at my hand and told me that that I was going to die at 18.

ZS: Then, much later, I came to do a film from England and stayed with Papaji Prithviraj [Kapoor] . He had a famous astrologer called Mullahji. He said, “You will die at 62.” I turned 62. Then I was 72. At 82, I was definite I was going to die. I have crossed 92 now. I don’t know when Mullahji meant. But he died.

KS: Now tell me. We’re both approaching the day. Have you thought about death?

ZS: I am preparing myself for that. When I go to sleep, I try to keep myself smiling. So that when I die, I have a smile on my lips. And I want electric cremation. I don’t want any poems or fuss after that. And for heaven’s sake, don’t bring back my ashes. Flush them down the toilet if the crematorium refuses to keep them. I tell all, if they tell you Ammi is dead, or my friends, ki Zohraji mar gayi, I want you to give a big laugh. Think about the funny things. My funny face.

KS: Well, it’s somewhat different for me. I being a Sikh would normally be cremated. I’ve left a will, saying I want to be buried. I want to give back the earth what I took from it. But no monuments of any kind. Only a tree to be planted on my head. And the only people who’ve agreed to let me be buried are the Bahais. But, Zohra, do you have any theories or beliefs of life after death?

ZS: When I sit on the terrace and recite my poems I look up at the sky and say, “Kameshwar, aa rahi hoon, theher jao zara.” That’s my husband, who committed suicide.

KS: I’ve just finished writing a book called Death At My Doorstep where I’ve debunked all these theories of rebirth.

ZS: Maybe a whole new life will open out. Maybe we’ll float. Maybe we won’t recognise ourselves. We’d be something like... I don’t know... jelly, or something wonderful.

KS: As I keep saying, my vision has become poor and I have hardly got any strength left in me and I walk with difficulty. But [looking at Zohra] aankhen abhi bhi badmaash hain. Just leave a flask of wine and the goblet in front of me. That’s one thing I look forward to like Ghalib did. I drink scotch as a matter of principle and I enjoy it.

ZS: I love a Bloody Mary! When I went to Germany, I stayed with an aristocratic family who were strictly told that I shouldn’t be given any pork or alcohol. But when I came back from Germany after three years, I remember stopping at a station where we were served lunch. There were ham sandwiches. My cousin, Jameel, said: “Sahebzadi saab ke liye ham sandwiches lao, beer lao.” And once I had tasted blood...

KS: I have no taboos. The day I landed in England I started eating beef. I’ve eaten snake in Japan and China. I’ve eaten dog in Korea without knowing it. Kitchen-based religion doesn’t make any sense to me.

ZS: I went to Germany at 18 and I was in purdah till then. The burka was made of tusser silk. I asked them to cut it up and make petticoats out of it.

KS: Well, I’ve finished my autobiography where, in summing up what I aimed at and what I achieved, I think with Walter Savage Landor’s lines:

I strove with none, for none was worth my strife,

Nature I loved, and next to Nature, Art.

I warmed both hands before the fire of Life.

It sinks, and I’m ready to depart.

ZS: There is only one profound thing that I have said:

Life, this endless conversation with yourself

Silent, in sanity, audible in madness.

KS: [Hugging her, as she gets up to leave] Jawani mein kyun nahin mili mujhe?

ZS: [Smiles impishly] I bet you say that to every old girl you meet.