Designer Neeta Lulla on the challenges of styling the ‘Thalaivii” looks 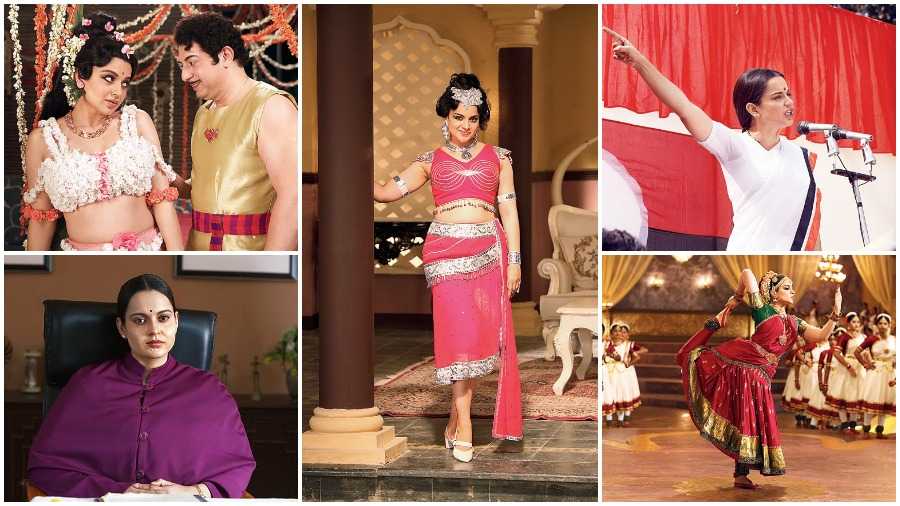 With J. Jayalalithaa’s biopic Thalaivii finally releasing in theatres on September 10, Neeta Lulla is having a “beautiful feeling”. “Doing something beautiful and putting it out there in the universe and saying that I have done my part and now let it take its course. It’s a beautiful feeling to see it culminate and come altogether on the 10th... it’s going to be fabulous,” Neeta, a celebrated fashion designer who is also feted for her work in films, tells t2. She has put together costumes for Kangana Ranaut who plays the late chief minister of Tamil Nadu and Arvind Swami, who plays M. G. Ramachandran, popularly known as MGR. In this chat, Neeta decodes the looks.

What was the starting point for putting together Thalaivii?

The starting point was Thalaivii itself. Who doesn’t know about J. Jayalalithaa? It was about how to create and recreate the looks and bring to life the character that the whole of Tamil Nadu worships. It was scary in the beginning ke galat bann gaya toh joote padenge (laughs).

The resemblance is uncanny...

Whatever I could do in terms of putting in my 110 per cent on the clothes I did, but a lot of credit goes to Kangana (Ranaut, who plays J. Jayalalithaa in Thalaivii)... putting on weight, losing weight when required. That actually did the magic as well. She gets into the clothes, feels the character and becomes the character. That is actually goosebump moments.

People would say it’s so simple, the images are there. But the challenge was that every time you saw a song or a video of hers, a new detail came up. And the same was for MGR (M.G. Ramachandran) also. I must have seen the songs at least 16-17 times each. Eventually I had to tell myself that this is how far it goes and this is the best I can do.

Even in terms of prosthetics, I have actually hand-structured them. I think this is one of my most challenging projects.

No, we didn’t have that, although I went near her office in Tamil Nadu and spoke to the local magazine vendor across the road and got some details from him. We also went to the shops that her costumers would go and shop for her. I got access to one of her costumers who used to stitch her blouses and stuff. We could get the cut in terms of what she exactly preferred to get it right and her cape.

Tell us about the various eras. What was the most difficult?

We went from the ’60s, her first film, to the ’70s and the ’80s. And it was predominantly till the early ’90s that we did. The recreations were the most difficult. The songs were the most challenging, like I said. Some of them were in black-and-white, so we were not getting the colours. In some, the colour intensity was different from what it actually was. So, we had to speak to local costumers and understand if this was the right colour. Then coming from the ’70s and ’80s, we had a lot of these acid colours and we had to recreate that. And then to recreate the detailing on the clothes and jewellery.... When I had started the film, I thought it would be a cakewalk! (Laughs) But, I was proven so wrong.

What about J. Jayalalithaa fascinated you?

Her attitude and confidence to be able to carry it off with so much style. I think back in the day, we have this particular gown which she’s worn with a thigh-high slit and these kinds of garments came about in the ’80s... she started the trend in the South way earlier. Then her bouffants. She followed the norms of international fashion. She had arrived then.

The saris that she wore and especially the traditional saris, and she inculcated a sense of westernism in it with her bouffant hairstyle and jewellery. She didn’t follow the norm and made her own identity.

Did Kangana Ranaut have any inputs?

She is so fabulous to work with. With Manikarnika (a film based on Rani Lakshmibai, starring Kangana) also, she didn’t ask me for once as to what she would be wearing. And, the same for Thalaivii. I, however, did keep sending her hair and make-up references... but she gave me a free hand and I really respect that... coming from an actor to give you a free hand without a question... that trust in you as a designer makes it pleasantly challenging because you want to put in not only your 100 per cent, much more into it. As a technician, I have always done my best when this has happened because it gives you the aptitude and ability to push your boundaries with a calm and peaceful mind.

What are your personal favourites?

Quite a few of the saris. There is one which I have recreated from my mom’s photograph. That for me was a deja vu moment because I had seen mom wear it as a kid and then suddenly there was Kangana standing in it... I had goosebumps and a tear in my eyes... reliving that with the same kind of hairstyle was something else.

Tell us about M.G. Ramachandran’s looks...

He is a surprise package and the resemblance there also is uncanny. His were the songs also... gave me equal grief (laughs)! I could have done 10 Manikarnikas or Jodhaa Akbars (starring Hrithik Roshan and Aishwarya Rai Bachchan) in the time these songs took. I told Kangana this.

Did you give up after a point?

I am not a give-up person and that’s why I watched it 17 times. I stopped watching after I was absolutely sure that I was 90 per cent there.

What did you imbibe from power women like Kangana Ranaut and J. Jayalalithaa?

Their sense of confidence in themselves and being the ones vocal about what’s in their heart. They are women of substance and strength and it is by virtue of that I think even Kangana the way she has played the part, to see her with that confidence and strength gave goosebumps, on the sets.