This perfect vehicle has empowered women, revolutionised fashion, cleared the air and led to glowing skin 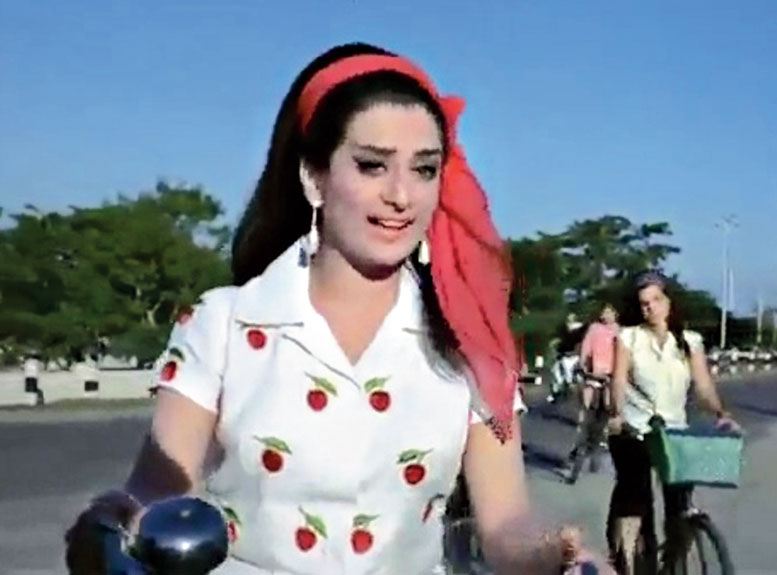 A few days ago, Queen Máxima of the Netherlands casually rode her bicycle to an official event at an art museum in The Hague, looking stunning in a bright yellow pant suit. She made us think of a few things straightaway.

We wondered why she is not among the most photographed royals of the world. And how the bicycle is a great leveller: it gently places the king and the commoner together. And how it is also the perfect vehicle of social distancing in a world ravaged by the coronavirus, while remaining low-cost and fuel-free.

But the 49-year-old Argentine-born queen seemed to say more. Dazzling in the yellow suit that featured a button-down blouse, slim-fit trousers, matching hoops in her ears and a radiant smile, she seemed to have arrived somewhere at a point that was a milestone in a journey, long, difficult, but utterly rewarding, begun more than a century ago in the West and taken up everywhere by millions of women now.

An Atlas bicycle ad from the 70s
Courtesy: www. amazon.in

From the very first, the bicycle for women married good politics and good fashion. The safety bicycle, safer and more practical than its predecessor, the large-wheeled penny-farthing, had been developed by the 1880s in the West. Women were ready to jump on to it, but their long gowns stopped them.

Hence, bloomers. These were the mother of pants: the baggy, ballooning underpants that women began to wear not as underpants. Of course, the bloomers and the transgressing women inside them provoked strong reaction from conservative society as symbols of all kinds of moral evil. In the 1890s, Washington was seen as full of “vicious women” who rode bicycles, who were worse than women who smoked!

But by that time, there was a bike boom. In 1894, Annie “Londonderry” Cohen Kopchovsky went round the world on her bicycle and in her bloomers, and an updated

version of the bloomers soon became the standard “bicycle dress” for women, says Hyderabad-based environment activist T. Vijayendra, who is a passionate advocate of the bicycle, especially for women.

By 1896, American civil rights activist Susan B. Anthony was talking about what the cycle had already achieved for women: “I think [the bicycle] has done more to emancipate women than any one thing in the world. I rejoice every time I see a woman ride by on a bike. It gives her a feeling of self-reliance and independence the moment she takes her seat; and away she goes, the picture of untrammelled womanhood,” she wrote.

Not surprisingly, the bicycle became associated with the Suffragist movement in England. In 1911, suffragette Alice Hawkins cycled around Leicester promoting the women’s right to vote. Her pantaloons caused as much outrage as her demand for women’s rights. Both would become permanent fixtures in the years to come.

The early Indian bicycles were released in India by the Hendee Mfg Co, who also had released the Indian Ladies Roadster Model 154 in 1920, a light roadster variety bicycle specially designed for the ladies, says Vijayendra. About the same time, the

bicycle was advocated as a prevention against the Spanish flu, which had been raging all over the world. The bicycle was excellent exercise for the lungs and muscles.

Initially the Indian takers were mostly of the upper class families — the aristocrats, the kings or the zamindars. For an ordinary woman of a lower class family, cycling was almost unthinkable, says Vijayendra.

The bicycle would get over these class prejudices and also invade popular culture. As proof Hindi films began to feature bicycles with not only heroes but also heroines riding them. For the heroines, the bicycle spelt glamour, and freedom.

Cyclewali was a 1937 heroine-oriented film, featuring Romila, Benjamin, Master Shiraz. In the 1956 film Ek hi Raasta, in a song sequence, Meena Kumari is on a tandem bicycle on the back seat and pedalling, Sunil Dutt is on the front seat and a baby is playing harmonica in the front basket!

In the 1960 film Ghunghat, a young Asha Parekh cycles joyously alongside Pradeep Kumar. And in 1968, Saira Banu immortalises the bicycle on the Indian screen with the song ‘Main chali main chali’ in Padosan.

The bicycle was becoming far more acceptable socially. In the Seventies and certainly in the Eighties, girls from middle-class homes were taking to cycling far more.

But the roads were getting crowded with cars. And cars were far more masculine. They still are. “It’s interesting to see how the predominance of cars changed the portrayal of women,” says Satanjib Gupta, bicycle mayor of Calcutta. “Bicycle ads often portrayed women as the riders, as agents of their own lives. But car ads still mostly show women as driven, as accessories,” he says.

In Bengal, the state government’s Sabuj Sathi programme that gives a bicycle to school students has changed the lives of many girls. But in Calcutta, the bicycle remains banned in several of the city thoroughfares. Let the ban be lifted. Women (as well as men) should be allowed access to the bicycle everywhere. Not only for the social, the political, or the environmental.

“Some of the most beautiful women I know are cyclists,” says Vijayendra. He also strongly advocates the bicycle for women over 50.