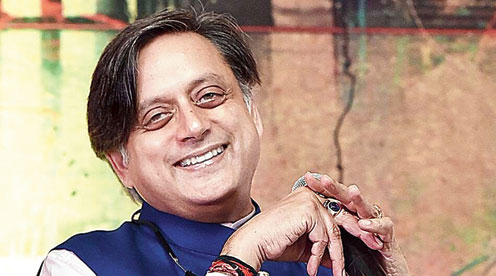 You may or may not agree with his politics but you cannot discount Shashi Tharoor’s brand of multi-hyphenate. For reference, just look at his crammed Twitter bio. However, seeing him graciously acclimatise to the viral popularity of his eclectic vocabulary has been very entertaining. Don’t get me wrong — I know the man has always been popular. But the many, many memes and jokes (some so bad that it hurts), have brought to the forefront the three-time MP’s stellar sense of humour, which is often self-deprecating. In fact, I remember not being able to forego my opportunity to ask him about some of the worst jokes when I met him last in January and he pointed out the ones with “a 28-word sentence with each word having 20 letters” as “ridiculous”. Having said that, he admitted to being genuinely appreciative of the clever ones — “There was a meme saying: ‘I used to be poor but then I met Tharoor and realised that I am impecunious’. Now that wasn’t too bad because it was sort of clever and funny.” Therefore I won’t be surprised to see his latest literary offering, aptly titled Tharoorosaurus, swiftly ascending bestseller lists as it serves the twin purposes of meeting India’s demand for an insight into Tharoor’s vocabulary as well as offering a peek into the lighter side of the man. 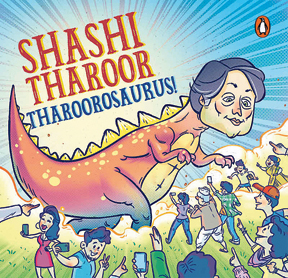 A recent session for the Ladies Study Group saw Tharoor getting poked, prodded and tickled (virtually, of course) by Anuvab Pal as they discussed the book, one long word at a time. While Anuvab visibly heaved after managing to correctly pronounce those words that the discussion was pivoted around, he also remained true to his style as he questioned Tharoor with wit and a sense of the “wicked”, if the parliamentarian’s post-event Tweet was to be taken into consideration! The result was a riot of a session that had me chuckling more than just a few times.

What began with Anuvab decoding the cover illustration of the book featuring a tyrannosaurus with Tharoor’s face on it, saw the author describe himself as “a tyrannosaurus who is not a tyrant but a democrat” or possibly a “Bronte-saurus”.

Recounting his father’s love for word games, Tharoor and Anuvab also played a quick game that saw him guessing the word that the comedian thought of through a combination of trial and error as he guessed the letters and subsequently, the correct word. 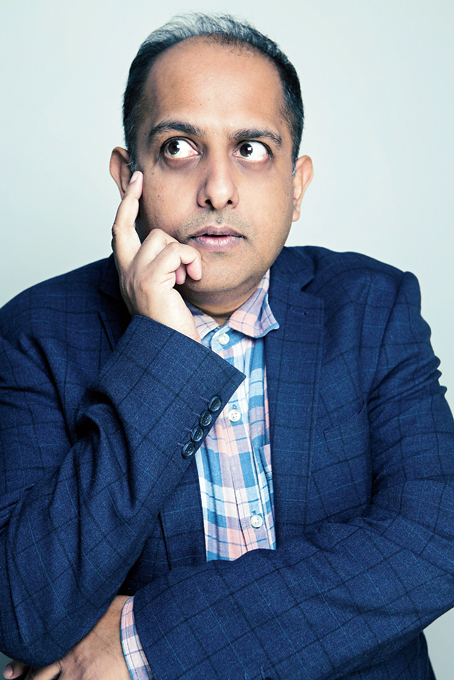 Anuvab Pal
Sourced by the Telegraph

Anuvab brought up Tharoor’s usage of the words “epistemophilia” and “chromulant” in the book — the former referring to the great love of accumulating knowledge for its own sake, likened to the general propensity for mugging up to succeed in the Indian education system and the latter being a product of urban lingo used in The Simpsons to mean something that looked legitimate but was spurious. “I apply this (chromulant) half of the time to the claims of this government!” — added the politician.

Tharoor attributed his proficiency in the English language to having been brought up by “uprooted Malayalis” as the language was the only one they could carry around with them. “My advocacy of English is very much that it is a pan-Indian language. It allows a Bengali to talk to a Malayali — it becomes a lingua franca in the good, literal sense of the term as a language spoken freely everywhere. Admittedly by a small minority and elite but everywhere,” he explained.

The popular politician also took a go at his own sense of humour as he recounted telling a friend that the actual name of “Covid-19” should just be “the novel coronavirus because it is a long story” and the long pause that he was met with. “Every time I have tried to be funny, it has come back and bitten me in the ankle,” laughed Tharoor when Anuvab countered him about his stint as a stand-up comic on Amazon Prime. And to Anuvab’s proposal for a separate “piece of land near Goa” where Tharoor could run for prime minister to appease the millennials who just love to hear him talk, the seasoned MP from Thiruvananthapuram refused to even hypothetically abandon his constituency as he said, “It can’t be Goa because it has to have seven syllables as anything less than that is less challenging!” “And that brings me to a question about politics because politics and language are so closely connected… what is Prime Minister Modi’s government to you? A kakistocracy, a lunacy, a kerfuffle or a juggernaut?” — Anuvab pressed on. While Tharoor acknowledged the present government’s general election victories as a “juggernaut”, he reserved “kakistocracy”, “lunacy” and “a little more than a kerfuffle” to dismiss the government’s workings. 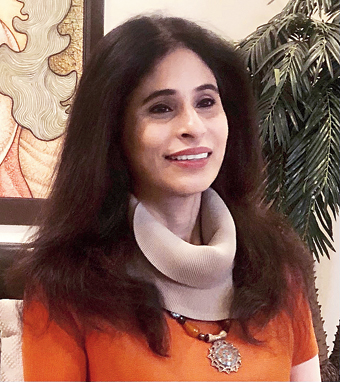 Having 7.7million followers on Twitter must bring with it an acute sense of self-awareness as Tharoor pleaded guilty for people assuming that he only used “big English words”. “Me using “farrago” had garnered some attention and then I used “floccinaucinihilipilification” while making the announcement of my book The Paradoxical Prime Minister. That’s when everyone started looking up this word and it went viral,” he recalled. From largely seeking remedy only through his words so as to not encroach upon the freedom of expression of others but being hopeful for self-restraint on the part of those indulging in contentious media trials to the coveted feeling of “cwtch” during the time when he was in contention for the seat of the UN general secretary and whether he received it, Tharoor and Anuvab kept the scope of the discussion both wide and varying.

The tongue-in-cheek Anuvab eventually pulled out the big guns, namely Oscar Wilde and William Shakespeare and quoted the former on marriage and the latter while referring to Tharoor as a “much married” man as he lightheartedly baited him to use one of his words from the book to describe the institution of marriage. Tharoor cleverly floated words such as “agathokakological”, “panglossian” and the “oxymoron” in things such as American diplomacy or the United Nations before dismissing all of them and calling it merely his misfortune. Later, when questioned about a catchy phrase in Hindi for his political campaigning for places “where the knowledge of Wodehouse is limited”, Tharoor answered with a phrase from his days at St. Stephen’s during running for president there — “Shashi Tharoor jitega zaroor!”

Now, if you think that the erudite Tharoor with a formidable vocabulary that has made Twitter go into a tizzy so often and whose latest book draws its nomenclature from a wordplay with “thesaurus” is only adept at polysyllabic words with a complicated etymology, think again. For the best was saved for the end as Anuvab tested Tharoor on his knowledge of urban lingo. To his “What’s up, bro?”, pat came Tharoor’s reply — “Just chillin’, bro.” And if Anuvab was looking for any reassurance from Tharoor about how the session went, it came in the way of: “You’re fam, bro. Man, I am so basic but you’re so extra, bro. You’re on fire — you’re killin’ it!”

And to that I say, ’nuff said.