‘Beauty and the fantastic beasts’ 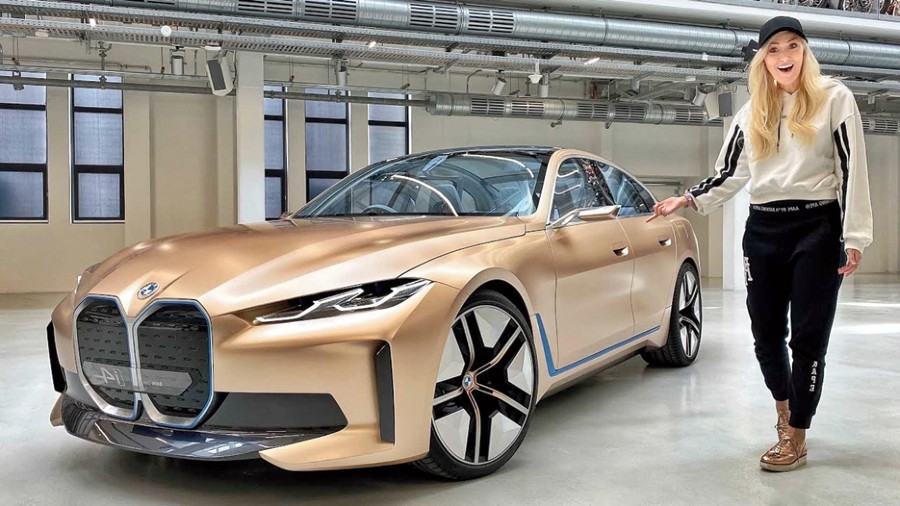 A rev-head at heart and an automobile vlogger by profession, Alexandra Mary Hirschi, who goes by the online moniker Supercar Blondie, is a prolific social media celeb. And why? Because she makes a living driving high-end exotic supercars! From Ferraris, Bugattis, Koenigseggs and concept hyper-cars, she has been there, driven it all. An Australian, now based in Dubai, the self-styled car-fluencer has a whopping 45+ million followers on YouTube, Facebook and Instagram. The Diva of Drive tells us about her life, her cars and the ride so far.

When did this fascination for supercars start and how?

I’ve always loved supercars and luxury cars since I was a little girl. I’m not sure where and why it actually started but I come from a strong driving culture in Australia so I spent a lot of time in cars growing up. It was always my goal to one day own a luxury car.

As a youngster, what car did you drive?

My first car was a Mitsubishi Lancer, it was passed down from my brother to my older sister and then to me. I loved that car. It had lots of personality after being on the road for seven years already. I was just so happy for the independence it gave me.

You studied journalism and business at Queensland University of Technology. What were your aspirations back then?

When I started university I really didn’t know what I wanted to do or what career I wanted, so I started with a degree and then swapped after a year to study broadcast journalism and business advertising. I really enjoyed it and from there my goal was to either be in TV or radio as a broadcast journalist.

You were a newsreader and presenter for a talk radio show on Dubai Eye 103.8. Tell us about that huge leap of faith that you took.

Yes I got my dream job of a radio presenter on a prime time show and I really enjoyed it so it wasn’t an easy decision to leave and start my own company. I got offered to drive a luxury car one weekend and I was pinching myself, I was driving a car that one day I dreamed of owning. So from there I worked on being around as many cars as possible. Every weekend, I’d go to car shows or to friend’s places who have cars and also borrow cars from manufacturers because I was a journalist and they had official press cars. So after work every day I would then work on arranging new cars, editing and uploading videos. Eventually through a lot of trial and error we found out what people are interested in watching on Instagram. At about 50,000 followers I made the decision to quit my job and go for it. I couldn’t keep working two full-time jobs, I needed to choose… and success doesn’t come without taking some risk. So I quit my job and within a year I had grown my following to over 4 million across Instagram and Facebook. After a year my husband quit his career to help me and so the two of us worked every day on the business. Today, after three-and-a-half years, we have grown the SupercarBlondie accounts to over 37 million followers.

How did the name Supercar Blondie come about?

When I was on the radio I had the handle @radioblondie so when I quit the radio I just swapped out the word radio for Supercar.

Tell us how you curate content? What goes on behind a car review?

So much! We need to liaise with the car companies to organise a specific car. These cars are often overseas so we need to arrange flights and make all the shoots work together in the same trip. Sometimes the cars are flown in for just a couple of days. Then we’re working with the heat and the sun. We need to film everything before the sun goes down, but after the temperature cools enough to be out in the sun in Dubai for hours. We need to research the car, speak to the manufacturers and arrange where the shoot will be. Arrange all the logistics of getting the car on set. Then we think about how we’re going to film it for each platform. We do a different video for Instagram, Facebook and YouTube so we need to film everything three times. Each platform is different so we discuss how it will work best for each. We then film for a few hours and then head home to edit and upload. Then it starts again the next day.

What cars are parked in your garage now? Which one is your favourite?

I own two cars at the moment. I have a Rolls Royce Wraith Black Badge and a McLaren 720s. I got them because they have completely different driving experiences so I can choose which one to take out depending on my mood.

What’s the total worth of cars that you have reviewed/driven?

I have no idea. I have reviewed so many cars, I have never added up the total value. Because I specialise in hunting down one-off cars, many of the cars I drive are worth several million dollars each.

You were the first to drive the extreme hyper-car, Devel Sixteen. Tell us about the experience.

I appreciate people who want to push the boundaries of what is currently possible so I’m always excited when someone builds a car that looks nothing like what is currently on the road, and also has the goal of creating an engine that no one else has done before. So I really liked the Devel Sixteen for its vision. When I drove it, it just had a test engine in it so I didn’t get the full experience. I’m looking forward to that and am in contact with them.

From Radio Blondie to Supercar Blondie… What’s next for Blondie?

I want to stay with cars because that’s what I enjoy most. However, I have found my audience also enjoys other luxury videos like mansion tours and yachts. So I will continue to include more of those videos on my profiles in future, but just like with cars, I will only feature it if it’s super special.

The Arabian Business hailed you as one of the ‘Top 30 Most Influential Women in the Arab World’ and they nominated you again in 2019. In 2020 you won the Shorty Awards for Breakout YouTuber? How do you see these?

It’s always nice to be recognised for your work. This industry is still so new so it’s nice to see people understanding how it works and recognising that social media can be a legitimate business.

You are also a columnist for Esquire ME. How do you juggle your time to do all this?

I don’t write for Esquire anymore as I simply don’t have the time. My platforms now are Instagram, Facebook and YouTube and I try to create different videos for each platform every day so it’s hectic. That’s on top of dealing with clients and building the business. My team grew from just me and my husband at the beginning of the year, to six people! So we are busy training our employees and growing into other areas.

You have kind of broken the glass ceiling as the automobile industry as well as online car influencers’ list was majorly male-dominated. Your take on it?

Yeah it’s been a difficult journey as the industry was very male-dominated, so at first I got a lot of push back from peers and from the industry. The other thing I was doing differently is taking a more layman’s view on cars so that everyone could watch and understand even if they don’t know anything about cars. Up until then we really only heard from car experts about cars, which is fine, but for the majority of the population, these car tech terms fly straight over our heads. So I wanted to talk about cars in a fun, relatable way from a non-tech expert view. So I also faced some push back on that too, because people in the industry weren’t used to non-car experts being around cars. However, this is one of the reasons why my platform was successful, because the videos appealed to so many people, not just car experts. Being a female at the beginning was hard but I kept pushing through and now it’s become an advantage because I’m the only woman with this profile in the industry.

Your take on e-cars?

Love them. Very excited about the future of electric cars. There is now an opportunity for car companies to completely redesign their cars and make them look super futuristic, because they’re no long designing the car around the engine. So I’m excited about the design prospects. Also I love the linear acceleration you feel in an electric car. There is no jerking in between gears and the torque is just insane. As soon as you put your foot down on the pedal you are thrown forward. Also excited about how electric cars are going to sound. There is an opportunity for cars to sound any way we want them to in future.

How are you spending time now in the pandemic?

It’s been an opportunity to slow down and take time out to reassess the business. Last year was so hectic, we were travelling nine out of 12 months so it was a blessing in disguise. We had time to rest and recuperate and then finally had the time to work out how to keep the business going without involving so much travel. Now we’re working on expanding the business into other areas.

How was your India experience in May 2019?

Absolutely loved it! Loved how hospitable everyone is in India. I was welcomed so warmly and had such good experiences. A lot of my Indian fans came out to say hi to me and I was overwhelmed with how much love I received. Had some fantastic drives with local supercar crews as well. I look forward to going back.

You had hosted a show, ‘Car Crews with Supercar Blondie’. Will there be a follow-up season?

I’m working on something completely new when it comes to TV. There will be another show likely coming out soon. However, with the pandemic, it’s harder to travel at the moment to shoot, so it will take longer than initially planned for the next show.

You are a global social media influencer. Who influences you?

I don’t consume a lot of social media myself actually because I’m always on it for work, so when I have time, I like to switch off my phone and not consume it. I wouldn’t say I have people who actively influence me, but I would say my husband is a big source of inspiration. He’s so positive all the time that he picks me up when I need it.

Back home in Australia to visit my family

An upcoming car you are excited about?

I’m excited about the Project One

Five best supercars you have driven/reviewed?

Coolest feature on a supercar?

A hologram in the centre console 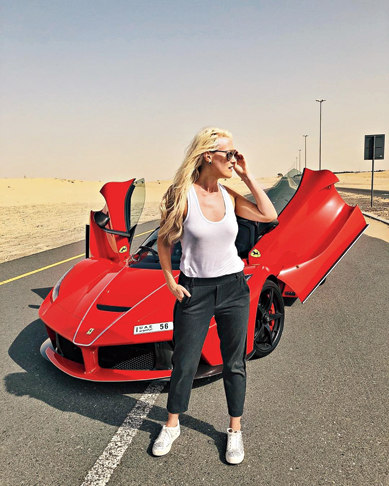 Supercar Blondie with the LaFerrari Aperta 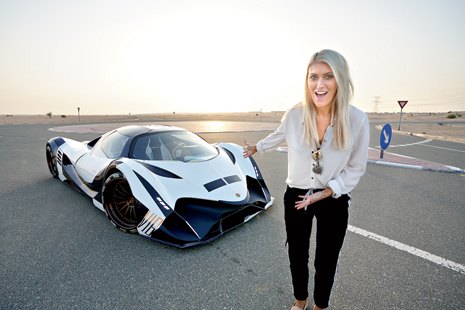 Supercar Blondie with the Devel Sixteen 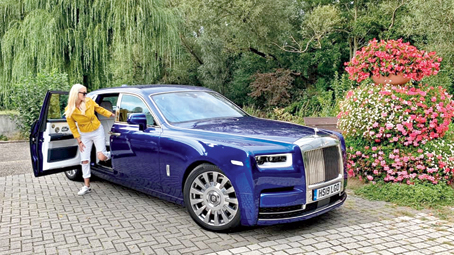 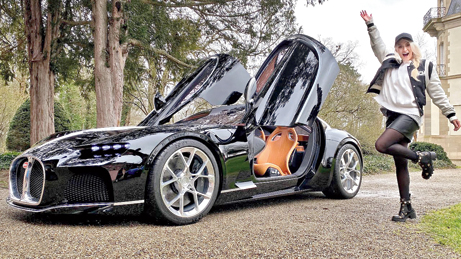 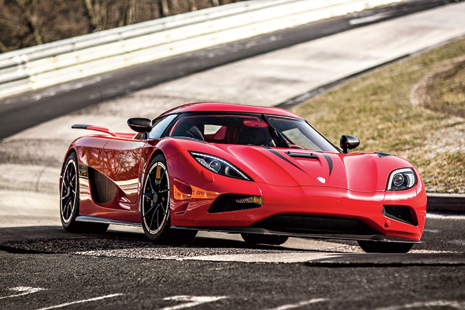 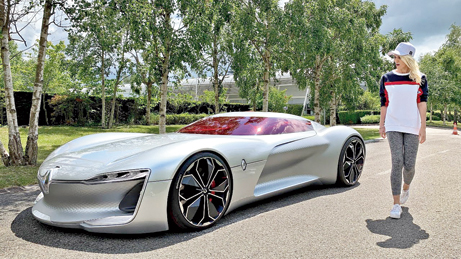 Supercar Blondie alongside a Lotus Evija... 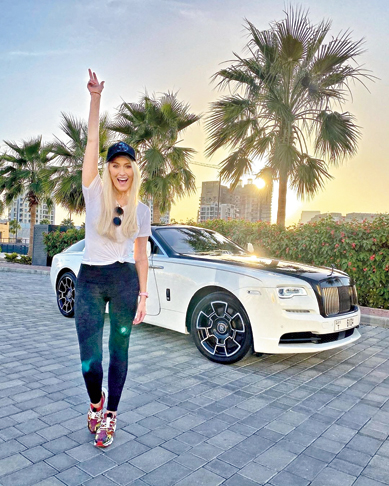 ... and seen here with the Rolls Royce Wraith Black Badge