Advertisement
Home / Culture / Once upon a time in Tangail, a dacoit notorious

Once upon a time in Tangail, a dacoit notorious 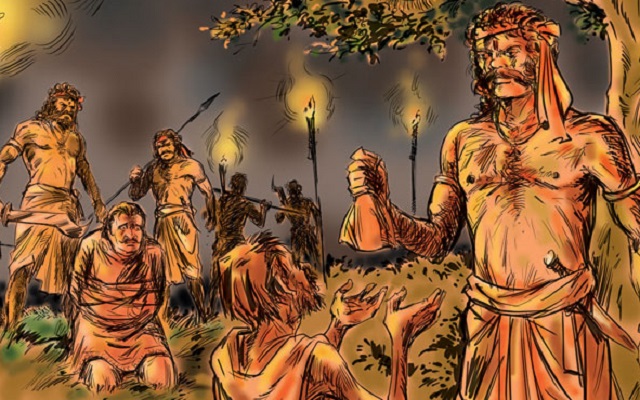 There is this friend I have. A very close friend, if you know what I mean. Closer to me than my shadow — that kind of close. In any case, once upon a time, we… sorry, they — the Thikdars — used to be the zamindars of a certain province in Tangail. (It lies in present day Bangladesh.) But even before that, when Bankimchandra Chattopadhyay was still alive and writing, and the British Raj was in its heyday, my fa… sorry, my friend’s family ancestors led a fascinating, if also a somewhat notorious life.

My friend’s last known ancestor was a dacoit. He would offer puja at the local Kali temple, then mount a horse and, armed with a sword and whatnot, descend with his men on a member of the landed gentry — usually after announcing his own arrival with a missive in advance. No, he was no social do-gooder in a dacoit’s garb. He was not robbing and looting to take from the haves and distribute among have-nots. No such thing. He was greedy and ruthless and I have been told that he was quite the terror of Tangail. He was just a dacoit.

And that is how things were until one epiphanous night. The Ancestor was out with his robbinghood, about to pounce on a zamindar’s bounty. The zamindar’s army of lethels, men trained in wielding the lathi, fought back bravely but the dacoits were stronger and in the end they overpowered the zamindar’s men. The Ancestor, enraged at this attempt to resist, meant to teach the zamindar a lesson, leave an example for posterity. He was ready to kill the zamindar. The zamindar, however, fell at his feet and begged for life. He pleaded with the dacoit to take his wealth and spare his life. He promised him he would be owner of all that he surveyed.

He was a learned man, the zamindar, and at some point the pleadings took a philosophic turn — the point of life, the pointlessness of material wealth. Perhaps it was what the zamindar said, or the way he said it, or perhaps the offer of land and riches sounded like a great business proposition, the long and short of it is that The Ancestor gave up robbing.

As the decades rolled on and The Ancestor’s progeny lived and reaped the benefits of his last loot, another thing happened. With every generation, his name became a whisper; someone, everyone, turned the volume down on stories of his exploits; in fact, he became a memory sooner rather than later and even that memory was given a discreet burial.

Many years later, nearly two decades ago, when my friend was but a boy, his parents took him to Tangail. A bus ride from Dhaka, a boat trip, some distance covered in a bullock cart and a brisk walk down a muddy path later they reached the house where The Ancestor lived.

It was a two-storey kachcha house. There was neither electricity nor any abundance of wealth to be seen anywhere. The only thing that might be said about it is that it had many rooms. That visit, my friend and his sister were told to play in the family garden. I… my friend remembers that the “garden” constituted acres of forest land. He and his sister got lost and did not find their way out till dusk.

The other thing that he remembers is sitting down on the earthen floor for dinner. He told me he remembered how my… sorry, his father’s distant cousin’s wife made such a fuss and got him a piri or a low wooden stool. And the point is? The point is when I… my friend sat down on the bare floor, he realised it was very damp, almost wet; his shorts were soiled. And that is when he heard his aunt mutter something about jewellery buried in the floor of the house and inside the wall. Jewellery that was the long-gone dacoit’s loot.

My friend is of gentle demeanour, has never heard of six packs — though he easily smokes through six packs in a day — and rarely picks a fight with anyone, not even The Wife. I… he often wonders about The Ancestor. What he must have looked like. If he had a handlebar moustache or something like his own sparse and whimsical grasslands? He wonders if The Ancestor wore a red head band and had his own loot cry. He tries to stave off the Dr Jekyll-Mr Hyde kind of worries.

Nevertheless, the odd thought will once in a while tiptoe into the mind on a day gone wrong — is there any spark of The Ancestor’s spirit within him? One time he was on the balcony, lost in thought, and the Corvus splendens cawed so loudly that he jumped out of his skin. Spark, did I say? Unlikely. Not even a dead ember.

Dakini and Yogini: The fierce companions of goddess Kali

EnigmatiKali: A discourse on the many forms and layers that make a mystery of the goddess