Dakini and Yogini: The fierce companions of goddess Kali

Humbler souls, expectedly, have been known to quake in front of these fearsome ladies 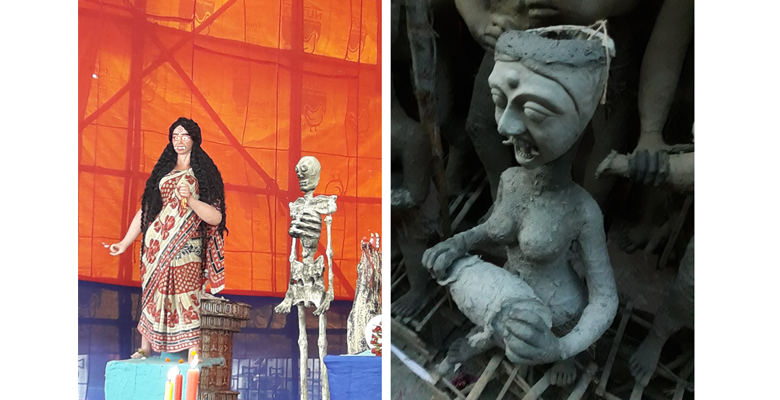 Poor Nitin Gadkari. The Union transport minister’s brain seems to have missed a wave. Gadkari believes that hefty fines would prevent Indian commuters from committing such transgressions as, say, showing the finger to traffic lights. He is wrong. There is nothing wrong with the recalcitrant biker or car driver who zooms past traffic signals. It is the traffic signal, that idiotic vertical pillar with flashing lights — red, amber and green — that must go. The figure of a Dakini or a Yogini, the fierce companions of the goddess, Kali, must come up at each traffic junction instead.

This suggestion is not being made in jest. Gadkari is unaware that these ghouls would be particularly competent in stopping drivers from crossing the line. They wouldn’t even need to chop off their heads or drink their blood, as they are fond of doing. All that the Dakini would do is turn on her red lights. You see Gadkariji, in Didi’s Bengal, that strange political turf that continues to elude your party, ghouls are blessed with fiery red lights in place of eyes.

Dear Gadkari babu, if you were to walk through the serpentine lanes in some of the ancient, spookier parts of the city — Chetla Road, Banamali Sarkar Street, Raja Nabakrishna Deb Street or Narayan Sur Lane — as the autumnal daylight begins to fade, giving way to the eerie twilight hour and its ghostly shadows, you would see spectral figures of Dakinis and Yoginis lined up along these stretches, their fangs bared, the hollow craters of their eyes lit up by a flickering scarlet light. The sight is enough to stop cars; even those flashing lal battis.

Humbler souls, expectedly, have been known to quake in front of these fearsome ladies. Some years ago, we — a small group of cynical souls — had decided to savour the mysteries of a particular Kali Puja.

Our chosen teertha that fateful amavasya night was the Shashaan Kali worshipped inside the premises of the crematorium at Keoratala.

It was, indeed, a sight to behold. On entering the burning ghat, we found our way to a kapalik surrounded by an excited, adoring throng. The bearded man with matted hair was dressed in a black alkhalla, the loose robe synonymous with the practitioners of occultism. A tilak, the shade of ruby, ran from his forehead to the tip of a rather flat nose. He had seated himself in front of the pandal, next to an empty pyre, the one, we were told, that is used for “natural” cremations that use wood and not that modern discovery called electricity.

One of kapalikji’s special powers, apparently, was the ability to speak with Kali’s ogresses — Ms Dakini and Ms Yogini. The “conversation” started as soon as he began his show sans stage. Amidst the tumult of the frenzied beating of drums and kartaal, kapalikji began to chant. The man next to me, possibly one of Kalighat’s (in)famous sebayats, assured us that the kapalik was discussing the troubles of the world with those two ebony women. The skull-man — kapaliks were known to wield skulls in the days of yore — chanted his questions. Dakini and Yogini answered them knowledgeably, with the luminescence in their eyes. The ladies knew it all. Every mystical missile that was thrown at them by the sadhu was met with an all-knowing flicker of eye-light. Even the goddess, just for a second, seemed to cast an approving look at her besties.

We heard later that mayhem — a primordial darkness — descended after our departure. One particularly tricky question got the ladies stumped. Their fiery eyes went dark. The light, literally, had gone out of the lives of Ms D&Y. For Keoratala had been plunged in darkness by a power cut.

All hell, expectedly, broke loose in the dark. The kapalik quiz master, lore has it, was accused of blasphemy. How could he ask a question that would challenge the wisdom of not only the wise owl but the wise ghoul as well? The crowd had, much like the demons, tasted blood.

Thankfully, that wasn’t quite New India. The kapalik did not have to pay a price in blood. An apology was demanded. He complied. They say just as he was muttering his apology, lying prostrate in front of Dakini and Yogini, the light returned to the ladies’ eyes.

None, however, remembered to thank the CESC, which had resurrected the power of Ms Dakini and Yogini.

The lonely temple with 64 Yoginis