Aswekeepsearching on their latest release 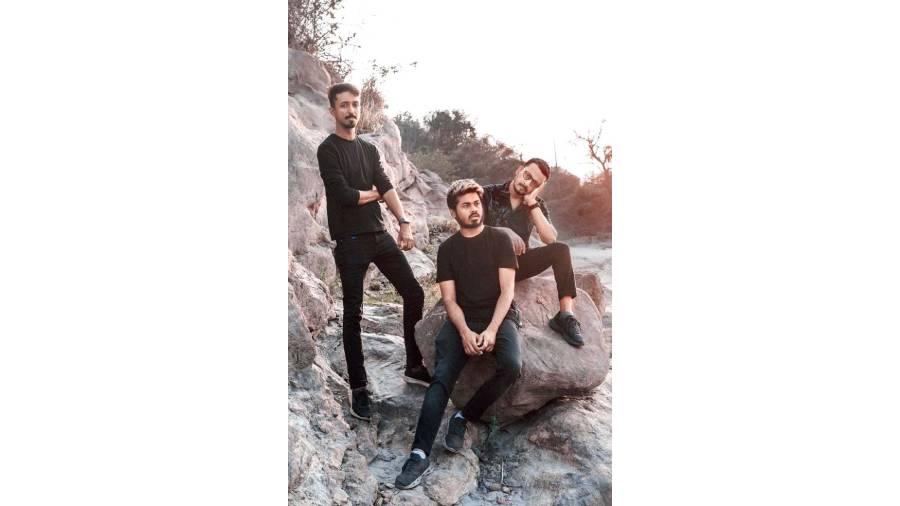 Post-rock band Aswekeepsearching had joined t2 for an Instagram live session a few days ago to speak about their latest single and making music during the pandemic. Formed in 2015, the group has always focussed on putting forward positive messages. Success has come to it in heaps and they have managed to open for several well-known acts, like God is an Astronaut, Steven Wilson, PG Lost and Tides of Man. One week ago they released their single, Ovotaar with Shankuraj Konwar, which smashes barriers of genres and regions.

How was the video shoot?

Sambit: We just got done with the shoot. We are at our friend’s place (Ishan Saha) in Calcutta. The video will release soon.

Uddipan: It was a fun shoot. Though we can’t speak much about the video but the idea for it came to us a few days ago.

Sambit: They (his bandmates) stay in Goa. The planning happened over 10 days and they got their tickets, plus we have Vaibhav, who is a scenographer from Bangalore. We also have some exciting artistes from Calcutta who are working on this.

What about your latest release, Ovotaar? How was it conceived?

Uddipan: All ideas come to us impulsively. We could be chatting and something would come to us. Ovotaar also happened the same way; we thought Shankuraj’s voice would fit the song. Shankuraj is a good friend. I’m from Assam and we are from the same city. So we got on a call and discussed the project. Since the Zoom call went well, we sent him the track and he put out his lyrics.and then we were like... ‘This is it!’

Sambit: I also remember that he was giving an interview and he was asked a question about who he would like to collaborate with. He said: ‘Why not Aswekeepsearching?’. So we called him. In fact, we had met in Guwahati for a gig and we played two songs with him and that was amazing. He’s a nice and funny guy.

The song is about the protagonist praying to the Almighty to come down and fight all devils.

Uddipan: Lyrically, the work belongs to Shankuraj. Whatever rough scratch that I had recorded... leaned towards spirituality... like I was in that zone. So he wrote something that suited the mood.

Sambit: If you see the video you will also see the English translation to the Assamese words. He’s included an Assamese prayer. Uddipan also has a verse in the chorus which talks about walking towards the light.

Uddipan: I also remember Shanku talking to me and mentioning the pandemic and how the search for light became immense in this period of our lives.

How does it cut across genres and regions?

Uddipan: For us it was never limited to language or a region. First, I was surprised to see hardcore Aswekeepsearching fans, who stick to us for being a post-rock band, say: ‘What a beautiful song.’ That was our bigger achievement because we realise that they don’t care about limitations of genres or language.

Sambit: We have also collaborated with Adil (Rashid) for a few things. He’s a great friend and a phenomenal guitarist. I think Uddipan just came up to me and said: ‘Let us not restrict ourselves to just us.’ Maybe we needed to break certain rules. So we have collaborated with Adil, Moses and others. I also feel proud because they never restrict themselves. Two developments could have happened — either things go wrong and we need to delete the footage (laughs) or something good comes of it.

Can we get a time frame for this project? When will it be out?

Sambit: Maybe a month because a lot of it depends on post-production. Our engineer is working from Canada, so there’s a huge time difference and it causes a lag. So we don’t want to mention a date and disappoint anyone.

Coming back to the single, how did you all put it together, working from different cities?

Robert: We had a performance with Shankuraj which happened in Guwahati in February this year. We started preparing specifically for the show. It was amazing to be on stage with him; he’s a phenomenal musician. And we knew that it was not just going to be limited to that performance; we knew we would be working together. We spent a couple of months on the song.

What are your views on making music during a pandemic?

Robert: Honestly, it wasn’t too difficult for us. Ever since this band has existed, we have been used to working online. All of us were based out of different cities and for five years we have been continuously making music from our bedrooms.

Is there something you want to tell young musicians making music at the moment?

Uddipan: Don’t leave music; music can come later and you can figure out things that will support you. Then use that support in your music. I hate it when people say they are only doing music and not supporting it with anything else in life.

Sambit: I don’t want to give advice for something I can’t stand behind. By chance someone doesn’t make it, I don’t want to be that person they look at because I gave you an advice. You never know who influences you or who I influence.