A visit to Harry Style’s House in Berlin 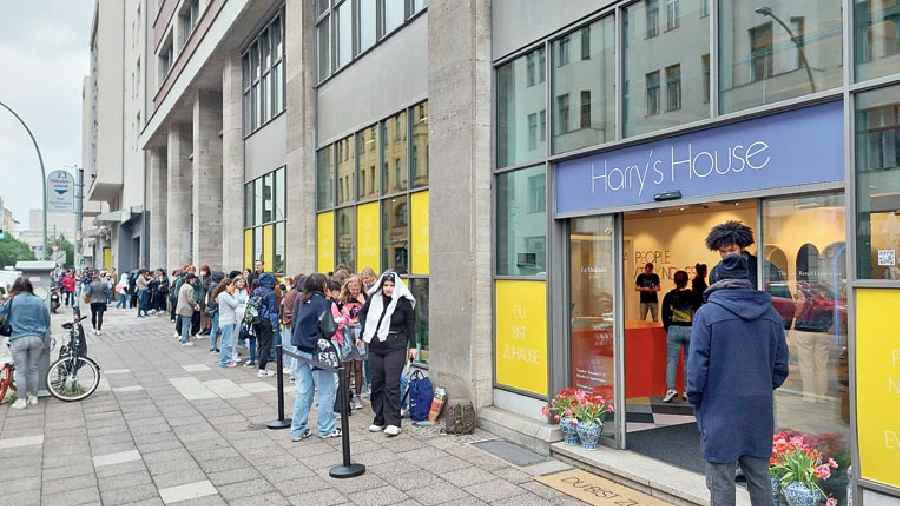 I was sipping an idle cappuccino at breakfast in Berlin when Harry’s House popped up right across the street.

Motel One at Dircksenstrasse, at the centre of Berlin, is where we were staying and it was my friend from Finland Maryan Abdulkarim who put me on to the piece of news when I wondered aloud why scores of youngsters were queuing up since early morning on the pavement. “That’s for Harry Styles’ new album,” said Maryan.

Indeed, a quick scan of the local news on the Net revealed that “Rosa Luxemburg Strasse 2, 10178 Berlin” was the location of one of the nine Harry Styles shops that had come up across the world. For three days, May 20 to 23, Harry’s House was to welcome in fans and give them a chance to pick up exclusive merchandise that would be available only at these pop-up shops.

Despite not being keen on the Sign of the Times singer, known for his extravagant clothing style, I thought this globally exclusive experience was too good a chance to pass up. Fuelled by curiosity, soon I was crossing the street.

The doors to the store had not opened yet, except if one were to flash an American Express card. An Indian press card did not help, so it was more prudent to simply wait it out.

Staff members were handing out a pen and sheet to everyone in the queue, listing the items on sale with pictures and prices. At the head of the queue was a bubbly threesome — Mika, Hana and Rim — all 11th graders from the local Felix Mendelssohn Bartholdy Gymnasium. They had reached the spot more than three-and-half hours ago and were counting the minutes. “We are ready to wait forever,” gushed Mika. “Like a week may be. We are camping here,” Hana added pragmatically, pointing to the folded blanket she was carrying in one hand. “We have waited three years already,” Rim stated, commenting on the gap after which a Harry Styles album was coming out. The last one, titled Fine Line, had released in 2019.

This truly belied serious commitment, given that the sky was overcast, an icy wind had picked up and in no time a sharp shower descended, making the Motel One lobby a far more desirable address for me than the pavement of Harry’s House.

But Harry’s legions of fans would not be displaced. Out came the umbrellas for some and for the rest, the hoods of their jackets were shelter enough as they kept their vigil.

At 11am, the doors opened to the first batch. One could make that out from afar from the chorus of squeals.

Alexandra Quade, who walked out triumphantly around 11.15am, felt the 15 minutes she had got to spend inside were worth dragging her mother and friend Sarah Gehrardt over despite the weather forecast. “The keychains are already sold out but I got this,” the 15-year-old announced, holding a Harry Styles poster in one hand and the CD in the other.

Patricia Nottorf, a college student from Hanover, had taken the early morning train to Berlin just to lay her hands on the orange vinyl that was a store exclusive. It didn’t matter that the vinyl would set her back by € 35, which was more than double the cost of the CD (€ 17). “It’s a collectible,” she shrugged.

The vinyl was the item of choice for Clara Bettoni too. “I have Harry’s two earlier albums as well in vinyl,” she explained. She was part of a group of five friends from Switzerland who were touring Europe. “Two days ago, we heard the pop-up store would be happening at Berlin during our stay. So we had to come,” she said.

Among her friends, Manon Deboro picked up As It Was, a single that was being sold separately. Styles had released the track about broken love last month to give a foretaste of his upcoming long player.

Coralie Charvoz said she listened to music on Spotify so had no use for an album. “I got a hoodie and a cap.” It puzzled me that there was no picture of Styles or his name on either. “Umm, there’s the flower from the album cover,” Coralie explained to me.

The odd pair out in this queue of excited teenagers and college-goers were Klaus Bock, 84, and his wife Gitta, 75. “Our granddaughter, who stays in south Germany, has expressly told us to pick up the album for her. She wanted us to go early as there would be a big crowd. I had told her she was overacting. But this is crazy,” exclaimed Gitta, trying to count the number of people still ahead of them in the queue.

Harry’s House was spread over the ground floor of the building. The most arresting sight was the words in multicolour letters ‘Treat People with Kindness’, his 2019 hit, on the wall facing the road. But the maximum selfies and photos were happening in front of a wall-to-wall black-and-white blow-up of the singer himself. Music was being played from the new album. A framed selected tracklist of the album stood on a stand. Items available at the counter included a special album box set, a limited-edition album zine, T-shirts, hoodies, towels and hats.

A fan mimics Harry Styles’pose at the store

The album cover itself was also on the wall. The image had the pop star standing upside down on the ceiling of a sparsely furnished living room. There was a vase of pink tulips on the floor next to the sofa. A wooden framed painting with white flowers hung on the wall near the arched doorway.

Some websites, I had heard, were offering bookings of the furniture on the album cover and tempting fans with offers to furnish their own houses based on the Harry Styles theme, but there were no furniture pieces being sold here.

In the run-up to the launch, a curious website, YouAreHome.co, had appeared. It had featured just the arched door that opened to different images every day when one rolled one’s mouse over the graphic. In a nod to this mysterious doorway from the album artwork, two false horseshoe-shaped doors on the wall of the hall opened into mirrors on which fans could see themselves reflected, as if visiting Harry’s house. Fans of Harry would feel at home here, hence possibly the words Du bist zuhause (“You’re home” in German) were printed on the mirrors as also on the doormat in front of each.

The officials were tight-lipped about figures of how many albums had got sold from the pop-up store but when I looked in the afternoon, the queue was still there, though much shorter than in the morning. That augurs well for Styles’s upcoming world tour, in course of which he is also supposed to visit Germany for several shows in June and July. When I last checked, the Berlin concert, scheduled for July 20, at the 60,000-plus capacity Mercedez Benz Arena, was “selling fast”, according to a website vending the tickets.

SPOTTED IN THE QUEUE

Alexandra Quade (left) shows the poster and album she got

Klaus Bock, 84, and his wife Gitta, 75, with the list of Styles products on sale at the store
Harry Styles Berlin Music Album
Share
Advertisement
Advertisement