Calcutta has refused to stop growing since it came into being. But that has taken a constant toll... 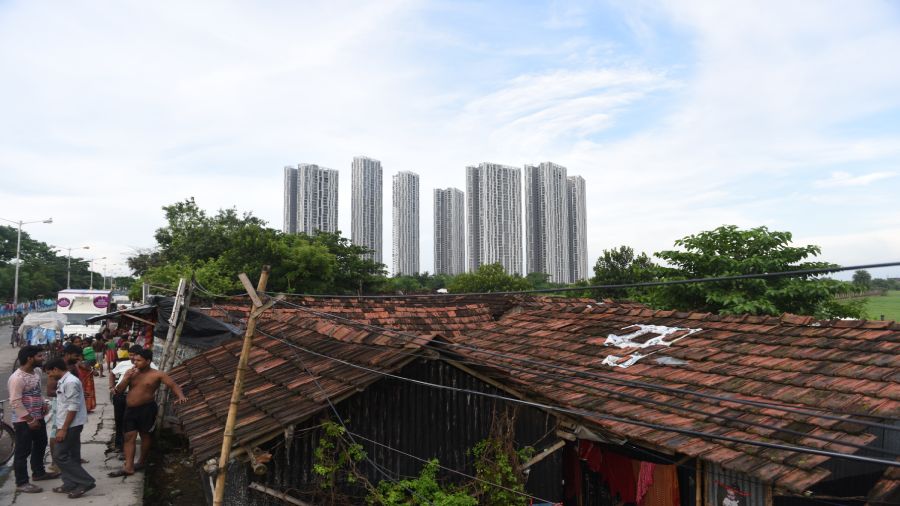 When a city grows, its denizens seldom have reason to cheer. Because cities seldom grow. Leaning on actual and amplified demand, cheered on by corporators, administrators and ambassadors, cities overvault into an ambitious space sans planning and checks.

“Calcutta grew by chance,” says Nilangshu Bhusan Basu, who is a retired principal chief engineer of the Calcutta Municipal Corporation (CMC). When the British took over governance of the city in the late 19th century, its population was 2,00,000 and its total area 50 square kilometres. More than 150 years on, the city has grown four times in size. It houses 44,96,694, according to the 2011 census and there are another six million who float in and out every day. Calcutta’s population density is 24,000 per square kilometre. In developed countries there are no more than 4,000 people living in a square kilometre.

So how has the city spread?

It has not grown much in the north. Old Calcutta with its narrow alleys had developed around hosiery factories. “The alleys here were built by the British to resist hand-to-hand combat which was the norm those days. Two people could not walk side by side. To build anything new here or to widen roads, large sections have to be razed to the ground,” says Pradip Chakraborty, who is a retired town planner of KEIIP (Kolkata Environmental Improvement Investment Programme).

To the west flows River Hooghly, so no expansion is possible there either. The city has expanded eastwards — the wetlands there have been largely filled up. A portion of east Calcutta — Salt Lake — encroaches into the erstwhile Sunderbans.

All of this means the major expansion has happened southwards.Says Basu, “Three hundred years ago, south Calcutta had grown with the temple at Kalighat as the nucleus. Those days, what is now known as Rashbehari Avenue used to be considered the southern end of the city. But now, south Calcutta ends where Diamond Harbour Road begins, in the southwest.” Joka and Behala are part of CMC.

Greater Calcutta or Calcutta Metropolitan Area covers an even larger area, four municipal corporations and 37 municipality.The planned and organic growth of a city hinges on its network of roads and pipelines — drinking water as well as sewerage lines — which has to be in sync with the number of people who would be using these. The British had an idea that the city would grow rapidly in the years to come and had accordingly constructed 180 kilometres of sewerage line.

To date, north Calcutta has the most well-planned road network. The number of vehicles has gone up 10 times since Independence but the roads can still handle the traffic load.

Jaydeep Mukherjee, another senior architect and urban designer, talks about how the British had followed an axis while constructing roads. “They planned them like a spine with branches running left and right. This is why the roads can bear the increased load.”

Post-1947, there has been no major planned infrastructural development. “No new sewerage lines were laid except on ad hoc basis, and that too without proper documentation,” says Basu. Waves of migration continued. Behala, where Partition refugees settled, did not have any sewerage lines to begin with. Ditto Garden Reach. Picnic Garden. Tiljala-Topsia. Jadavpur. Santoshpur. Mukundapur. Garia. Sonarpur. “Here, too, people settled down but there was no infrastructure to support this influx. Makeshift houses with tin roofs came up indiscriminately,” says Basu. All of the South 24-Parganas and parts of North 24-Parganas grew unplanned, unchecked, unsupervised.

More people also means more consumption and more waste produced. During Basu’s tenure at CMC, from 1981 to 2019, only 26.5 kilometres of man-entry sewer lines and 15 kilometres of non-man-entry lines had been cleaned and refurbished. “They were full of debris, construction waste and solid waste. There are telecom cables blocking the cross section of sewerage lines! There are electric cables too.” Result? Impeded water flow. Impossible repair work. And at the end of it all, yearly waterlogging.

As for drinking water, even now many pockets don’t have piped water supply. More people also means more vehicles, more traffic. Successive governments did not hesitate to make new roads. More bridges were added; flyovers started to come up. Today, there are 20-plus bridges in the city, 10 rail overbridges and 16 flyovers. These bridges and flyovers have come to be the habitat of the city’s labour force. They are the new slums. Says Chakraborty, “I have even come across spaces rented out on a shift basis to migrant labourers.”

As the city spread, parts of it choked. “Thirty three per cent of the wetlands are gone,” says Chakraborty. He adds, “The city has also lost its hogla vegetation, which was the natural water purifier.”

But the city has not stopped growing, not for anything. A lot of this growth is vertical. The tallest buildings have 65-75 floors. Laws have been tweaked to accommodate them. And, as Mukherjee says, tall buildings mean that much more depletion of groundwater.

Speaking of water, the 2006 city road directory lists 61 roads named after ponds — Manoharpukur, Ahiripukur, Bosepukur, Padmapukur, Muraripukur, Beniapukur... College Square was previously known as Gol Dighi. Writers’ Buildings overlooks Lal Dighi, which was once the only source of drinking water in all of Calcutta. A 2016 report shows that the city has lost 46 per cent of its water bodies to landfills.

Overweight and still putting on, how will the city breathe and live? Says Basu, “Look at Dhapa, it is the largest dumping ground here. There are two others — one in Garden Reach and another in Noapara. All full to the brim and rising higher and higher.” But there is no alternative ground to dump the waste onto.

Chakraborty adds, “How can we say that Calcutta can be turned into London when there is indiscriminate landfilling, daily passengers flooding the city, labour force moving out of the city and the state in search of work, slums so full that rooms are rented being out, no new industry, no revamping of existing industries, lost heritage... Lights alone do not make a city shine.”

But while unveiling the party manifesto last month, the TMC’s Partha Chatterjee said, “Mamata Banerjee promised to turn Calcutta into ‘Tilottoma’ and now we are promising to make it more ‘Tilottoma’.”

Realty: all eyes on follow-up