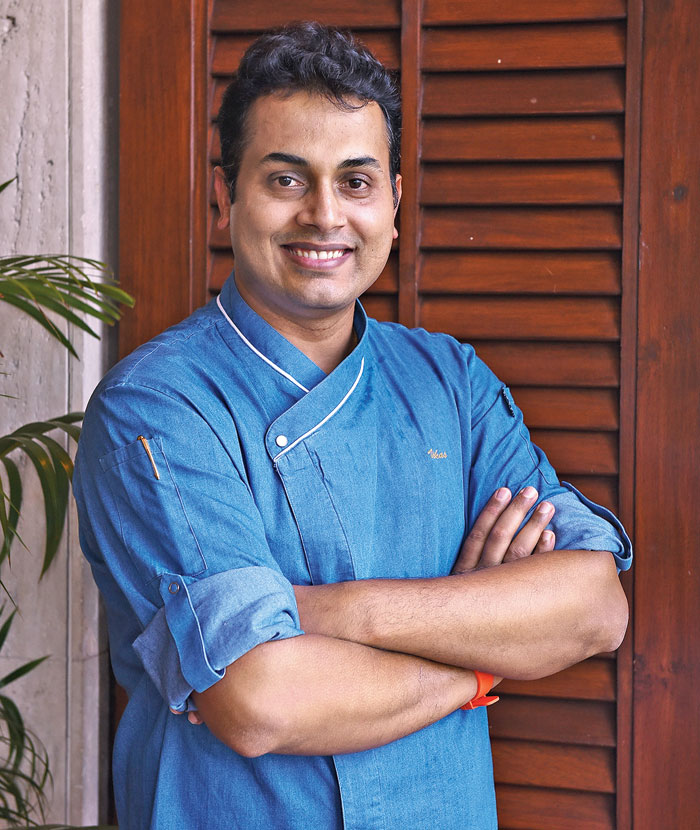 Hyatt Regency Kolkata has warmly welcomed their new executive chef Vikas Singh a month back and this guitar-playing, desi-at-heart chef is a breath of fresh air in the kitchens where he plans to make a lot of changes. From coming back to Calcutta after almost a decade to adjusting to this new hotel after Mumbai, he shared with The Telegraph all that he had on his plate!

Tell us about your journey that led up to Hyatt Regency Kolkata...

I studied in Calcutta in IIHM and started working with Oberoi (The Oberoi Grand). If I were to speak city-wise, I have worked in a lot of them. I have covered north, south and west with stints at Marriott group and Accor. Right before I moved back here, I was with Four Seasons Hotel Mumbai.

How does it feel to be back?

I must have spent some four years in this city in its entirety and coming back feels like home. I am putting up in New Town now and coming to work every day has me retracing my steps that I used to take while I was in college right here! It’s such a nostalgic trip that way. When you just step away from your college, away from yours parents, it’s an important and vulnerable period in your life and leaves a lasting impact. Now, when I drop my wife to work in Sector V and come to the hotel, I can see my college and my hostel and it feels great!

How has the experience been so far?

I joined this hotel during Durga Puja, which is a time when it’s super busy. So, I had to hit the ground running, starting my work from the very first day. I’m still learning because the scale of operation is large, with three restaurants, each different from the other — Italian, Indian and multi-cuisine.

I do have a lot of responsibilities in terms of the new menus that are coming in. La Cucina is our primary focus right now. Along with me, there are a couple of new faces in the kitchen — coffee shop chef, pastry chef, Italian chef are all new. Which just means that there are tons of new ideas on the table. Hyatt is like a heritage hotel for all of us who have spent their formative years in the city so this is an exciting opportunity that I am really looking forward to.

What are the changes you have noticed in the industry since you joined?

The industry has gone through a lot of changes in the past decade. Trends have come and gone and I have seen the focus shift from international trends towards all things local. People initially wanted to try new things by aping the West and this extended to not only what we cooked but also the way we were plating our dishes and the ingredients we were using. Edible flowers and molecular gastronomy would be examples of that.

Now the trend is to go back and focus on our roots. Focusing on local and sustainable produce is what we are looking at and it helps the brand messaging as well. Molecular gastronomy is now passe as a food trend in India and everybody is going local. Get your basics right, is the mantra for every new place that keeps cropping up.

How do you believe cookery shows that are cropping up every other day, help the industry?

Shows like MasterChef help spread awareness to make professions like ours acceptable. When I started off, it wasn’t, except my army dad who was more than supportive of my choice. However, explaining to my extended family was a task.

I have never been taken by the fad of celebrity chefs but I do applaud them for the work they are doing in spreading awareness.

Who do you get inspired by?

I have worked with some chefs who are not very popular in the quintessential sense of the term but are excellent at what they did. Those are the people who made me who I am now and those are the people I look up to. Michelin still hasn’t come to India but I have had the good fortune of working with a lot of Michelin-star chefs. There definitely is a lot to learn from the way they think and work.

I worked with chef Gary Mehigan on multiple occasions and I try to observe these maestros at work, be it in front of me or on TV. Not every learning comes from books or the experience at the hotel. One has to look beyond and that is what I try to do.

Even though I hail from Lucknow, my formative years were restricted to the cantonment. It is only after I went to school did I venture out and understand the kind of culinary world that waited for me outside.

What would you say is the unique element that you bring to the table?

Belonging to Lucknow, the Awadhi touch always comes with me. I started at a bakery where I spent three years so the knowledge of confectionary is also something that I bring to the table. After that, I specialised in European food, which I have been continuing for the last four years. That experience helped me curate my taste and knowledge in the appeal and gimmick of food.

Truffle. Not just because of its taste but also because it has finally become affordable. As a hotel, one can afford to include it in the menu although it comes at a good Rs 2 lakh per kg!

When I started off, truffle was only available in the form of oil. The executive chef would lock it up in his cupboard and shell out spoonfuls to chefs, asking them to make it last a week! For the last two-three years it has started coming in pickled or paste form. Now, in India, you can get fresh truffle, but one has to order a week in advance. It can be refrigerated but it doesn’t, obviously, have the same freshness.

Awadhi Gosht Pulao, Nalli Nihaari and Warki Paratha has the chef presenting Lucknow on a plate.
Pictures: B. Halder

Risotto with a twist where instead of Arborio rice, barley rice has been used, soaked in asparagus and parmesan water.
Pictures: B. Halder

Savoury macaroons with orange zest and feta cheese base. This egg-less dish is best paired with wines and can be found in different varieties.
Pictures: B. Halder