On the eve of Durga Puja, we invoke little-known gods of things big and banal whose enduring worship and place in the Bengal pantheon says something of the land and its people 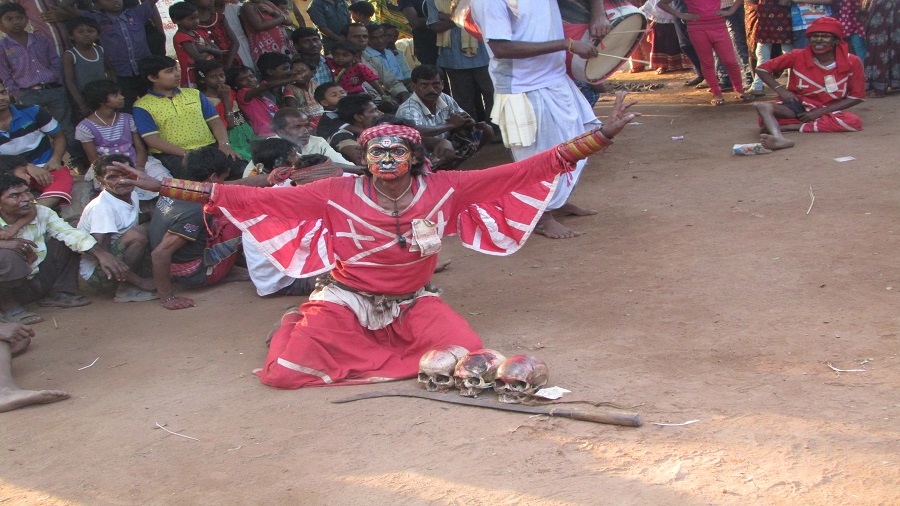 In some villages of Bengal’s Burdwan district, early summer is synonymous with Porabolan. This is when able-bodied men from the Dom, Bagdi, Hanri and Bauri communities — indigenous people identified as Scheduled Castes in the Indian Constitution — dress in red and black costumes with white stripes drawn across the chest, don multicoloured demon masks and sing songs while circling human skulls placed on the ground. Drums beat, gongs sound, bells chime and plates clang as they go round and round and round.

Porabolan is no ordinary song-and-dance ritual; it is considered sacred and is meant to liberate the performers and audience alike from the cycle of life and death. Swapan Kumar Thakur, researcher of folk history and culture travels out of his village, Buinchi in Katwa near Burdwan, every year to watch this ancient ritual. He says, “The origin of Porabolan can be traced to a thousand years ago, when Tantric Buddhism was the predominant faith of this region. There are similarities with the Lama dance of Tibet, Ladakh, Sikkim and Bhutan.” He talks about how the ritual underwent a drastic change when Brahmanical Hinduism became the dominant faith of the land, and how it was then that the dancers came to be identified as Kali’s men or Kalkepata. The ritual itself got tagged to Gajan, the Hindu festival associated with Lord Shiva.

For more than three decades now, Swapan has been travelling across villages of what is known as the Rarh region — the area between the Chhotanagpur plateau in the west and the Ganges delta in the east. He writes and trains rural historians who contribute to a crowdsourced online repository called koulal.com and the bi-annual magazine, Koulal, which he himself founded and also edits. Koulal is a Sanskrit word for the potter’s wheel. In the course of his extensive research, Swapan has come across hundreds of “odd gods” of marginalised people.

Buroraj is half war-god Dharmathakur (the guiding spirit of lathials or stavesmen who served the zamindars) and half Shiva. The ancient indigenous god was first acquired by the Buddhists, who shifted the traditional puja to Buddha Purnima in the month of Baisakh, and added some non-violent rituals to the sacrifice of goats, ducks and pigs to propitiate the god. The sacrifices continue to this day. Later, Hindus embraced this god as their own. Even now, priests from the marginalised sections — not Brahmins — preside over the worship of this deity. Says Swapan, “Buroraj is worshipped by people of all castes and creeds.”

Anthropologist and social scientist Ralph W. Nicholas, who has been studying the Rarh region for the last six decades, tells The Telegraph in an email from Chicago, US, “There are always customs that are not affected by Brahmanical rules and which endure as lok-achar or desh-achar (social or community practices).” 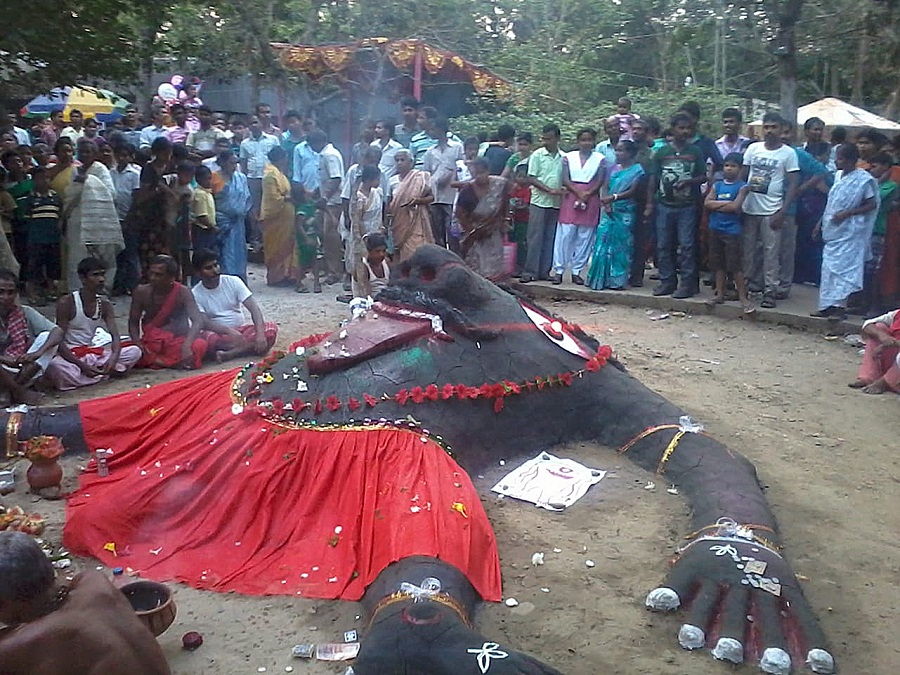 The Dom community of Amba village, near Jamtara on the border of West Bengal and Jharkhand, worship Entu Thakur. Ento is a Bengali word, the Hindi equivalent is jootha; the closest English equivalent is leftover on someone’s plate. Entu Thakur is more like a friend, philosopher and guide of the community than a figure on a pedestal. Just as Buroraj is represented by the Shivalinga, there is no idol here either, only three round stones on a platform. Says Swapan, “Here too, the priest is someone from the community and he offers the god a selection of food items from the humdrum daily menu and even country liquor, but only after having partaken of the fare himself.”

It seems priests also offer cigarettes to Entu Thakur. Apart from the daily offering during the annual festival in autumn, countless fowls are sacrificed at the altar of the god all through the year. While much of this might seem to contradict accepted notions of worship wherein food offerings become prasad only after the god has accepted it, the explanation lies in pre-Aryan roots. To be more specific, Entu Thakur, according to Swapan, is one of the surviving traditions of vamachara — practised by followers of Tantrism, a fifth century esoteric belief system centred on devotion to natural energy.

In the pre-Vedic era, the people of Rarh worshipped goddesses too. Shakambhari, the village goddess of Majhigram — near Mangalkote in eastern Burdwan — bears an uncanny resemblance to the goddesses depicted in Harappan seals. The goddess is worshipped on the ninth day of the month of Ashara with much fanfare. “Such is her dominance in the village that Durga Puja is strictly forbidden in Majhigram,” says Swapan. Local belief is that this goddess of vegetation protects from drought and famine those who cultivate vegetables, in particular shak or leafy vegetables.

In another week it will be Durga Puja, the ritual celebration of the descent of the all-powerful goddess to earth. But experts claim that Vedic literature does not have references to Durga, or for that matter any one single great goddess. Says Swapan, “The worship of a broad spectrum of female goddesses is found in many villages of Bengal.” He talks about 37 Chandi deities around Katwa in western Burdwan. He mentions Bagraichandi (in Bagdola), Kulachandi (in Kulung), Tikurichandi (in Mitratikuri), Mouchandi (in Mougram), and so on.

Dhelaichandi was worshipped by travellers. It was believed that the goddess would protect the wayfarer from the dangers of the road. To date, people tie a dhela (a clod or a hard lump of clay) with a string to a tree — usually a date palm or tamarind — as an offering to the deity. Then there is Mangalachandi, originally a tribal goddess and the guiding spirit of hunters. Says Swapan, “You will not find mention of Mangalachandi in any Sanskritic text but she is a prominent figure in the regional Puranas [post-Vedic texts] of Bengal. No Sanskrit mantra is chanted in her puja, nor do the priests follow any strict orthodox Brahmanical procedure.”

The presiding deity of the Yogadyas — the cult has as many as 32 castes and creeds in its fold — of Khirgram in eastern Burdwan is Devi Yogadya. Every year in April, a five-day festival is held in her honour. The ritual celebration involves a mock fight between representatives of the subalterns and upper caste Hindus, as each group tries to fish out the idol of the goddess hidden in a pond. The objective: to restore the idol to its rightful place, a shrine. As per the script, the subalterns are eventually defeated and the victorious upper caste Hindus grab the idol. Says Swapan, “This mock fight, known as Domchuari or Domchandali, is a reminder that the goddess belonged to the subalterns centuries ago, but the Hindu upper castes co-opted her.” 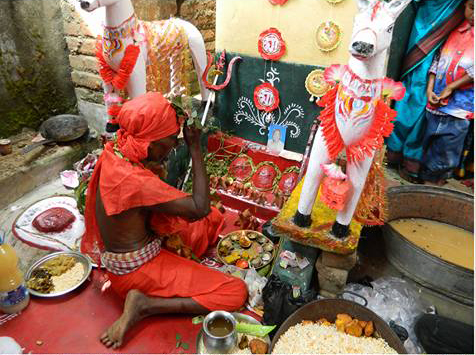 Entu Thakur puja of the Dom community of Amba
koulal.com

While the Dharmathakurs and Chandis have been assimilated by mainstream Hinduism, some of the indigenous gods and their curious ritualistic worship have survived in their original form. And for good reason too. Take the case of Manasa, the goddess of snakes. She is still the most popular goddess in rural areas, chiefly because people here can identify with the menace of snakebites and are still awaiting a solution.

Bhanjo is a goddess worshipped in the villages of Burdwan, Birbhum and Murshidabad for a good rabi harvest. There are no priests, only young unmarried women singing songs and offering the goddess foodgrains on a clay plate heaped with shaluk flowers. Says Swapan, “Bhanjo is a goddess of fertility. Girls pray for an ideal groom, a fruitful sexual life and a happy family. Fertility of women and agricultural fields are entwined in this ritual.”

While rural women pray for a bountiful family life and children, the men worship farm implements. Plough worship is rare nowadays — as tractors have replaced them — but ladders, which are used to level fields, are worshipped. In Katwa, devotees arrange their naivedya or food offerings on each rung of the ladder kept under a tree in the month of Sravana. To the feverish beating of drums, earnest devotees play with wet earth, symbolic of their bond with the soil.

And not just kindly gods, even apadebatas, or evil spirits, need to be appeased. 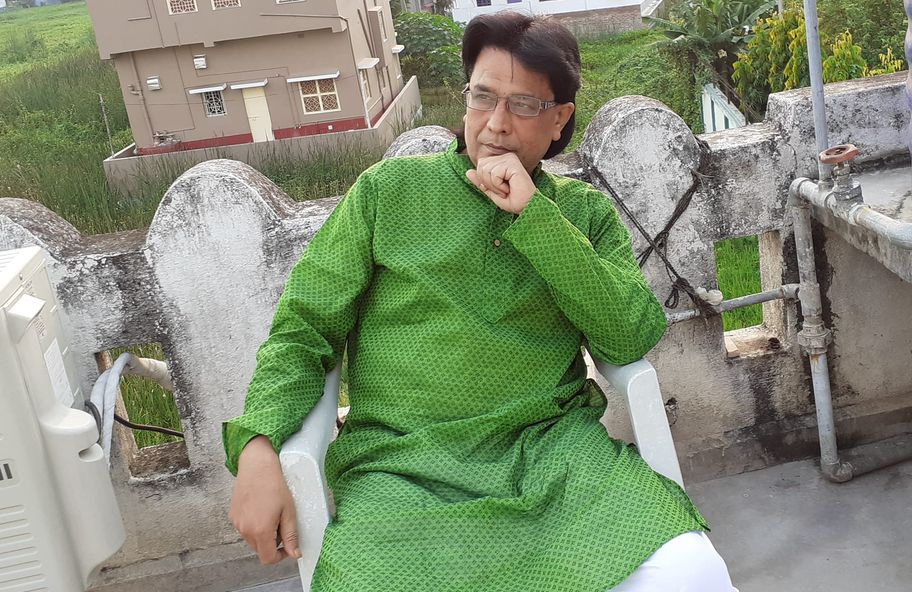 Ghentu or Ghantakarna, who is the governing spirit of skin diseases, is placated with rice, lentils and jaggery while women sing the ghentu gaan. The people of Phulia worship the headless Hajra to protect children from unnatural deaths. Then there is Rangadhar, a perpetually angry god who has to be placated with fowl offerings. In his book The Fruits of Worship: Practical Religion in Bengal, Nicholas writes about Jvarasur, the fever demon and consort of Sitala, the goddess who cures smallpox. Both Jvarasur and Sitala are worshipped to date. In many cases there is a tweak in the mode of worship — animal and human sacrifices have been replaced by the chop-chop of sugarcane or gourd. And milk flows, not blood. According to Nicholas, many of these deities are typical to Bengal.

In the course of his intensive research, Swapan has discovered that while the mainstream accepted some “odd gods”, some Vedic gods have been assimilated in the folk pantheon. He says, “Worship of Indra, the rain god, is now rare in mainstream Hinduism, but Indra as Jimutavahan is widely worshipped in Bihar, Bengal and Jharkhand.” He attributes it to what he says is “a unique regional tradition of religion that has emerged by breaking down caste barriers”. Nicholas seconds the observation. He says, “Bengal possesses a coherent and distinctive regional culture.”

A coherent and distinctive regional culture that even the gods didn’t tear asunder, but which must now be carved up to please men who worship votes and votes alone.

There's more to celebrate than Dussehra, Durga Puja and Holi

Kartik: Lordship in the corner