Art historian B.N. Goswamy’s talk on the portrayal of gods and demons in Pahari paintings seems more relevant now than ever 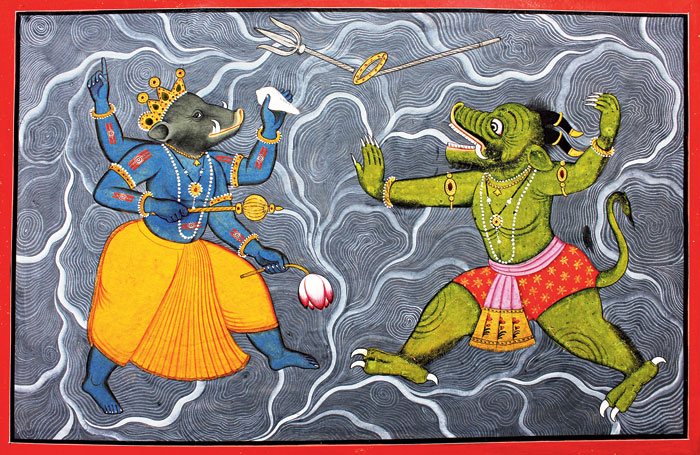 There is something odd about the relationship between gods and demons — one cannot do without the other. That’s the picture one gets after hearing art historian B.N. Goswamy’s discourse on Manaku, an 18th century Pahari artist from Guler in Himachal Pradesh. Goswamy was in Calcutta a while ago to share his insights on entities and episodes from another realm, as represented on canvas by 16th-18th century Pahari painters.

Pahari painting is a genre of miniature art that originated in the hills of the Punjab region.

The very first visual Goswamy shares is of total carnage. It is a representation of a clash between the devas and asuras. Several figures are seen lying dead, limbs severed and scattered, and blood oozing out. “Here we are in the serious business of survival,” Goswamy quips. Clearly, Manaku has imbued the demons with more detail — in their facial expressions, physical attributes, clothes and so on. “His rendering of demons is not only brilliant but also consistent,” he says. And as Goswamy enunciates the stories and traces the characteristics of the actors, it becomes clear how the painters’ imagination may have operated.

It is said that the devas and asuras were born of the same seed. Legend goes that Kashyapa rishi, who had many wives, fathered both. One of his wives, Aditi, gave birth to gods while Diti bore asuras or daityas. Then there was Danu who bore danavas, and Muni who mothered apsaras.

Goswamy has a sonorous manner of speaking that seems to take your attention in its embrace. So when he raises or lowers the pitch, you flow along with it. And sans complex terminologies, things of import are delivered easily. “Many of us aren’t aware of these stories, but if we are, our thinking begins to change,” he says. “A transformation begins to take place within ourselves; the seed of understanding is sown.”

Every now and then, Goswamy throws in examples of demons from the Hamzanama — the exploits of Amir Hamza, an uncle of the Prophet. These are stories from a long-established oral tradition. Mughal emperor Akbar had commissioned an enormous illustrated manuscript of the Hamzanama. The similarities of these figures with those from the Pahari tradition are hard to miss. But perhaps more fascinating is Goswamy’s footnoting with poetry from Faiz Ahmed Faiz, Tulsidas and Kabir, so that one stream of ideas flows into another and what remains with you is the essence.

“Different texts from ancient India call the body ‘daivasuram’. The human body and mind have both deva and asura in them,” Goswamy reminds. “One must also understand that gods can turn into demons and demons into gods. And that is the typically Indian way of thinking; the way our minds are conditioned by the stories we hear,” he elaborates. “The whole point that gods are white and demons black is something we need to cast out of our system.”

Perhaps there is a reason why it is imperative to be aware of essences and abstractions. Goswamy narrates a passage from the Jaiminisutra, an ancient Vedic text. As is the case very often, the demons are gaining ground. Finding themselves in trouble, the gods run to Brahma, the great progenitor, who advises them to recite from the Sama Veda, the Veda of melodies and chants. Having received this wisdom, the gods form a phalanx and begin to chant. The demons recede, the gods are relieved. Aeons later, the demons attack again. Once again the gods suffer heavy losses and rush back to the wise one.

What did you then recite, asks Brahma. The richas or mantras from the Sama Veda, they reply. But that’s foolish, says The Creator, I didn’t ask you to recite any mantra, only simple sounds. The sounds that fill the universe — abstract sounds, not words or sentences. This time around, the gods articulate what can be termed pure music or pure abstraction, and the demons recede. “This is one of the earliest references to the power of abstraction,” explains Goswamy, “highlighting the essence of things, and the importance of leaving out the unnecessary and superfluous.” 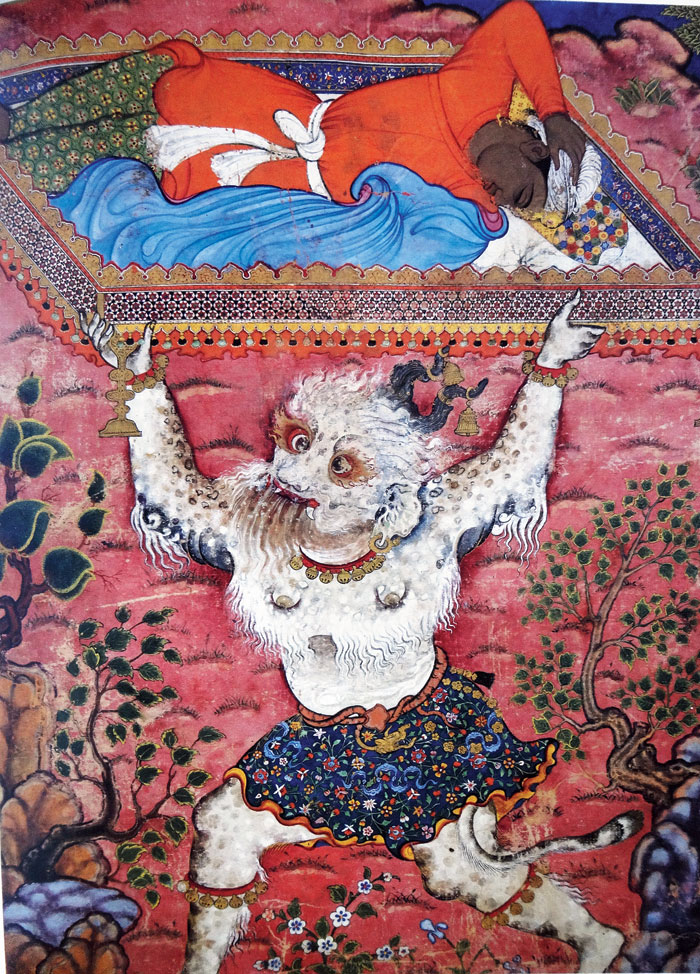 From the Hamzanama, a prince being abducted in his sleep by a demon
Courtesy, B.N. Goswamy

In one painting, the formidable asura, Hiranyaksha, is seen sitting with deva rishi Narada by the water with only their backs visible to the viewer. They seem to be in serious conversation, as if the asura were seeking advice from a friend.

In another painting, asura king Hiranyakashipu, having completed years of penance, is prostrating at Brahma’s feet for the boon of invincibility. Brahma grants him special powers — you shall not be killed during the day or at night, on the ground or in air, by man or any animal… He is ultimately slayed by Narasimha, an avatar of Vishnu, but that is another story.

Giving voice to our concern, Goswamy asks, “Doesn’t Brahma know what lies ahead if demons are given such powers?” Why then do the gods grant boons to the asuras, the permanent enemies of humankind? “I do not have an answer to that,” he continues, and neither does an answer seem relevant here. “The point is that there appears to be a reasonably easy connection between the gods and demons, and the demons are quick to exploit it,” he adds.

The art historian draws attention to an incomplete canvas. It shows some demons chasing Sandhya, the goddess of twilight, with Brahma by her side. There are eight asuras in full finery, every painstaking detail etched out. But the figure of Sandhya is yet to be coloured and Brahma is a repetition of his usual form. Says Goswamy, “It is as if the painter has lost interest in the woman and Brahma is a déjà vu. He seems to have invested all his energy in the demons.”

According to Goswamy, one of the greatest paintings in the entire range of Indian art is that depicting the battle between Vishnu as Varaha, the primal boar, and the demon, Hiranyaksha. When Vishnu appears on the scene, Hiranyaksha releases his powers of illusion and it rains snakes, weapons, rocks and pieces of flesh. Every creature in the painting is seen fleeing in terror, except Vishnu who is standing firm and strong. The terrifying battle is believed to have gone on for thousands of years, and Manaku devoted as many as 17 folios to its dense narration. “I hope you have paid attention to the manner in which the painter has created an endless ocean,” intercepts Goswamy. “The water consists not of ordinary waves but whorls and eddies, the concentric circles suggestive of the passage of time.”

There is also the form of Ravana who with his 10 human heads looks nothing like the ordinary demon. Asura king Bali is represented as a divine and learned being. Then there is Kali as Chamunda, licking every drop of blood that falls from the body of Raktabeeja so that no drop gives rise to another demon. One form meshes into the other, to the extent that it is difficult to tell god from demon and vice versa.

“Where must the lines be drawn,” asks Goswamy. “Look at Chamunda’s face and body... The goddess has taken on the aspects of a demoness. So are we in the area of black and white, or in the area of grey?”

It is indeed a matter of curiosity what the painters might have visualised while creating these monumental, threatening and horrifying figures. Because such images can only come from the depths of one’s being. Concludes Goswamy, “There’s something deeply unsettling about the manner in which imbalance gives way to balance, temporarily, slipping into chaos again, and the politics of the heavens.”