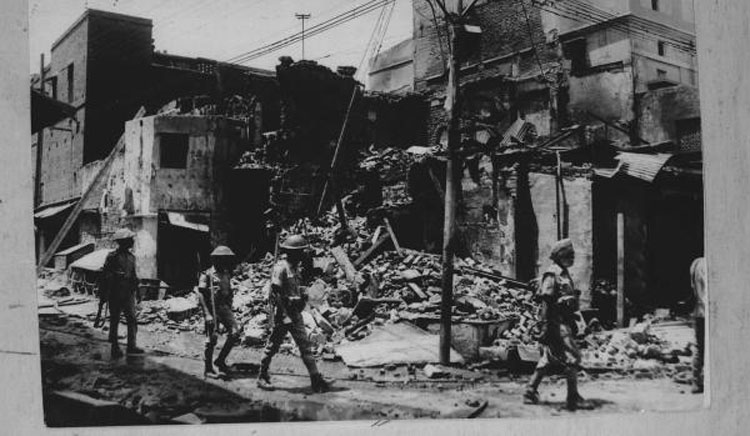 BSF and CRPF men patrolling in Sadar Bazar area in Delhi after an imposition of curfew for riots during Emergency
Image: The Telegraph, archive picture
Tuktuk Ghosh   |   Published 08.03.19, 03:13 PM

However, after a careful reading of the 383 pages and the detailed Notes appended to them, the claim stands largely belied. The effort to weave links with earlier trends is somewhat laboured and cannot adequately upend the shameful reality that Indira Gandhi — and no other prime minister before or after her — ruthlessly bludgeoned the Constitution as well as the reasonably well functioning politico-administrative, judicial and legislative structures primarily to satisfy her obsessive power lust. She took cover under the frayed fig leaf of ‘public order and interest’ and unabashedly promoted the grotesque excesses of a strangely crazed son who had absolutely no legitimate status in the scheme of things. A prized illegitimate, if there ever was one. It cannot be the case that authoritarianism, with the licence to stifle an entire population as an alluring option, was always a part of the political package, to be invoked in times of extreme stress, by any prime minister who had the gall and gumption to do so. This is certainly not so. That Indira was grievously wrong is no ‘myth’, as has been touted. There can be no soft expiation by stretching credulity.

In fact, the effort has the familiar patronizing overtones of colonial vintage that the masses would not find a fit in the democratic edifice that was crafted for them so meticulously by the Constituent Assembly and that the progressive policy initiatives beamed down from the hallowed portals of power would invariably run aground on the rocks of raw disconnect between visionary aspirations and preparedness for accepting radical change.

The dense detailing in the chapters, “A Fine Balance” and “Rage on the Streets”, does not convincingly bolster the author’s argument. JP’s critical role in bringing Indira to the brink, within the given conceptual frame, does not square either. His life and times have been eloquently presented but they could well be transiting a parallel track, quite unrelated to this frame. B.R. Ambedkar, who is quoted extensively throughout the book, was aware of the disconnect mentioned above, but did not foresee the Emergency as an inevitability or even a likely eventuality. What would explain the undoing of the Emergency by the very same potentially tainted system? This remains unaddressed, though it would have been a logical extension of the argument had it been an intrinsically strong one.

With the main claim faltering, one does not find much that was not already known in chapters 5 to 9, which go into the granularities of the Emergency and its aftermath. The frenzied, raving acts of nasbandi and demolition, the pulverizing of dissent and so on by Sanjay Gandhi and his obsequious coterie of Navin Chawla, P.S. Bhinder, Jagmohan, Rukhsana Sultana and company just make for easy, racy reading for a generation that has not lived through the trauma of an assaulted, tormented democracy and has little knowledge of it. To be more generous, the book is meant to cater to an audience unfamiliar with the Indian political landscape and its rough, challenge-riven terrain. Why Prabir Purkayastha, the JNU activist who was picked up in an apparent case of mistaken identity, should be so central to the book — almost its anchor — defies comprehension.

The stated trajectory from the Emergency to brazen caste politics and Hindu nationalism is barely substantiated. The ending, using Ambedkar’s words to obliquely trash the present prime minister as the one walking the path to dictatorship, is unwarranted and playing to the forlorn left-liberal gallery.

Forty years on, the Emergency of 1975-77 imposed by Indira Gandhi continues to exercise a curiously tantalizing hold on public imagination. Politicians of varying hues unfailingly hold it up as the darkest hour in our democratic experience. Commentators and academics keep the searchlight of enquiry on in the hope of unravelling something more that may help better understand what happened and why it happened the way it did. The ennui-factor does not seem to have pushed back the enthusiasm and interest to plumb greater depths.

Gyan Prakash’s Emergency Chronicles claims to strip away the ‘myth’ that the Emergency was a sudden event brought on solely by the then prime minister’s desire to cling to power. The book argues that it was as much Indira Gandhi’s doing as it was a product of Indian democracy’s troubled relationship with popular politics. The narrative seeks to offer a comprehensive historical account of the post-Independence period, culminating in what has gone down in history as a defining point of inflection. Mining available literature, Prakash attempts to reveal how the fine balance between State power and civil rights was upset by the unfulfilled promise of democratic transformation. He analyses how growing unrest disturbed Indira’s regime, prompting her to turn to the law to suspend lawful rights, damaging the polity and opening the doors to caste politics and Hindu nationalism in the process.