Advertisement
Home / Culture / Books / When all eyes are on the prize

When all eyes are on the prize

The politics notwithstanding, award nominations impart to books and authors a validation that is not easy to challenge 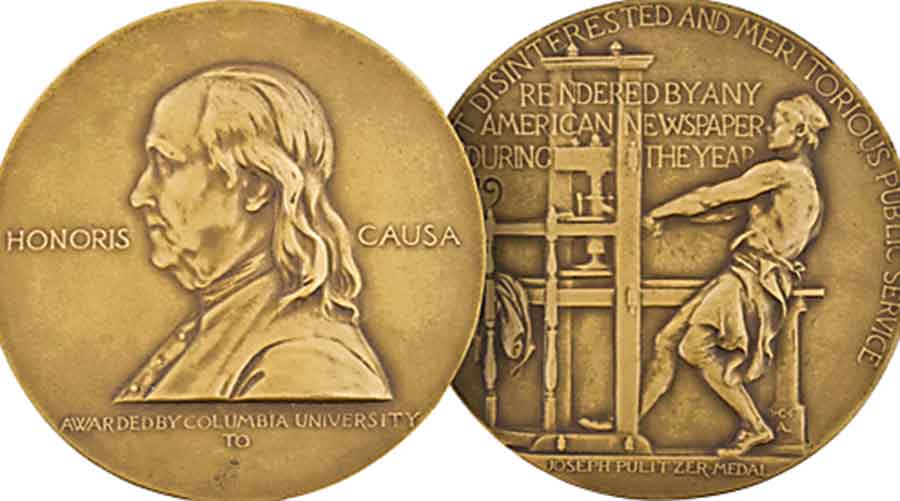 Obverse and reverse sides of the gold Pulitzer Prize for Public Service medal, which also serves as a symbol of the Pulitzer Prizes in general.
(Wikimedia Commons)
Kamalika Basu   |   Published 23.04.21, 01:00 AM

Bitter from having been denied the Pulitzer Prize for Fiction for years, Saul Bellow lambasted it in Humboldt’s Gift. “The Pulitzer is for the birds — for the pullets,” he wrote. “It’s just a dummy... publicity award given by crooks and illiterates.” Perhaps to save Joseph Pulitzer — the man after whom the prize is named was born this month — from such ignominy, Humboldt’s Gift was awarded the Pulitzer, leaving Bellow red-faced instead.

But many authors would agree with Bellow’s criticism of the Prize. After all, its history is mired in controversy. From Sinclair Lewis’s Main Street to Thomas Pynchon’s Gravity’s Rainbow, several books picked by the jury have finally lost the Prize because a conservative board vetoed the decisions. Yet, by no means is the Pulitzer an exception in this regard — allegations of internal politics have marred the legacies of most literary prizes. The Man Booker, too, has its share of scandalous stories — from fist fights to a judge threatening to jump off the balcony. The history of the Nobel Prize for literature is no less colourful: are not the controversies around the selections of Bob Dylan and Peter Handke still fresh in public memory?

The choice of the awardee is not the only bone of contention either — the concept of literary awards itself has turned out to be quite problematic. Although conceived with the noble aim of promoting fresh literary talent and encouraging healthy competition among authors, literary prizes may often seem to be steered by public perception. Of the Booker, Paul Bailey said that it “mirrored fashion — the collapse of the empire; post-modernist Victorian pastiche; New Age sentimentality”. One might argue that the tradition of rewarding genres in vogue still continues. Critics have noted that the rise of the Black movement in 2020 was reflected in the Booker shortlist of the year — four of the six writers selected were of colour. Is this a sign of the institution becoming truly more inclusive — which is commendable, given the alleged ‘white male’ bias of most literary prizes — or it is a ploy to stay in the good books of the reading community?

Conversely, literary prizes can dictate the terms of what is deemed to be ‘literature’, often sidelining works that deviate from the norms set by the awards themselves. The temptation of instant fame can mould the writing of authors. The economic incentives of popular awards can further skew the playing field — a Booker shortlisting can lead to 25,000 additional sales for a book, while a win can generate 200,000. Publishers would then naturally feel compelled to cater to the trends, placing undue pressure on authors to conform to the popular discourse. This can alienate those seeking to write differently.

The ripples reach the readers too. The politics notwithstanding, award nominations impart to books and authors a validation that is not easy to challenge — surely it is more likely for most readers to pick up a book with a label of a literary prize on its cover than something more obscure. How, then, would a promising work of literature fall into the hands of the discerning reader, the only true judge of the merit of a book?