To be anarchic and ridiculous, that's happiness: Arundhati Roy 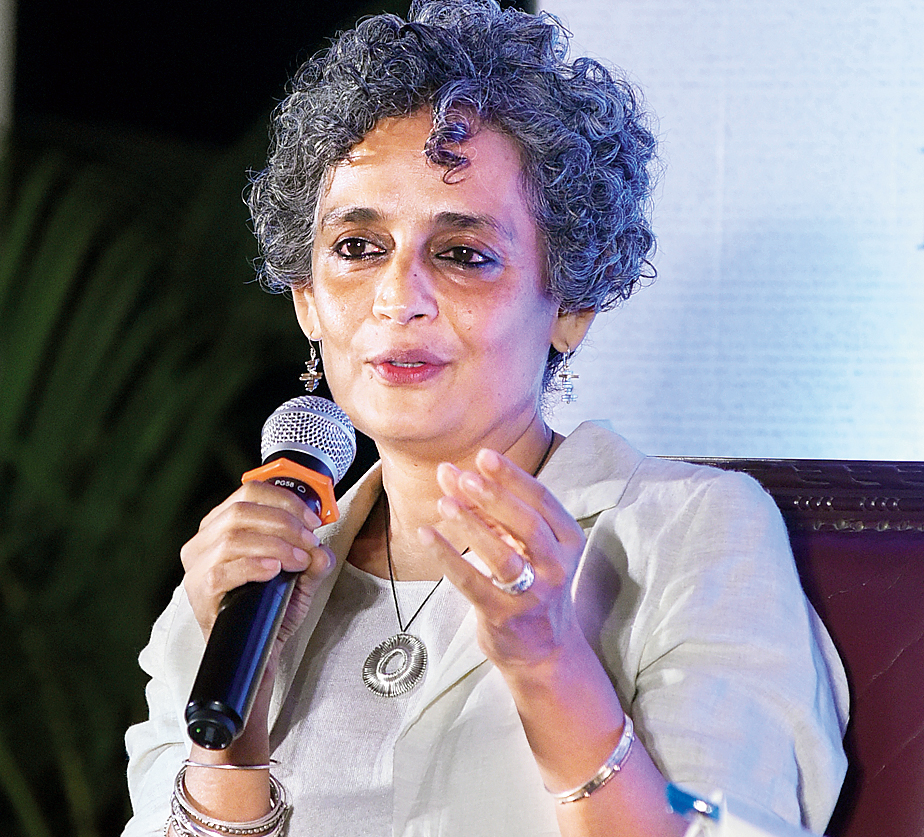 The other star of In Which Annie Gives It Those One Ones also happened to be in Calcutta that day — Shah Rukh Khan, who was here for the inauguration of the Kolkata International Film Festival. “We needed a broken student for this role but when Shah Rukh Khan came to audition, he was too pretty. We all said he should go to Bollywood and he did!” she said. The actor and the author have never crossed paths since.

On writing screenplay, essays and novels

After writing two screenplays, her learning was immense. “You learn economy, you learn dialogue, you learn plot,” she said, but soon found herself craving to write about the river on whose banks she grew up. It was this craving that led her to “write a stubbornly unfilmable book” and The God of Small Things was born out of an experiment. She spoke about her days of architecture when she would spend most of her time in office to escape her troubled family life. “When this balloon of fame and money came upon me (after the success of the book) I didn’t know how to react because I hadn’t sought it or planned for it... I remember a dream from the night I found out that the book had won the Booker Prize. I saw that I was a fish floating in a river when suddenly a green hand comes and picks me up and says ‘You can have anything you want’ but all I wanted was to be put back in water.”

The two-decade-long wait for her next piece of fiction over her more frequent and political essays must have been stressful, Sandip asked; she disagreed. “My most beloved writer and human being John Berger sent me a beautiful fax in his beautiful handwriting, after my first couple of essays, saying how both kinds of writing from me were dear to him, like walking on two legs. You need to do both of them,” she said.

On her characters from The Ministry of Utmost Happiness

For her fiction writing process, there is never a concept that she envisages. “When you are not on the grid, you tend to encounter other people who are also not on the grid. So these people drew themselves towards each other and it happened pretty organically,” she said about the characters in The Ministry of Utmost Happiness, her second novel, referring to the “extreme policing” in Indian society in matters of the caste system and religion. “These grids define our society and any transgression is met with extreme violence. This threat of violence is extended to anybody who doesn’t fit the grid. Anjum has the grid of gender running through her but that isn’t the only thing. She is a Shia Muslim born in Old Delhi and we know that is a more dangerous identity than that of the hijra, especially in North India,” she said. While Tilottama, the architecture student alienated from her mother, is bogged down by the burden of caste, Saddam Hussain, the Hindu who pretends to be a Muslim and waits in the darkness to avenge his father’s death, has the burden of religious conversion.

She believes a writer can speak about a book or even understand what has been written only after its completion and spoke of the madness that was creating a character like Biplab Dasgupta, a man madly in love with Tilottama. “The God of Small Things was a story of a family with a broken heart at its centre so it’s easier for people to understand and love it. The Ministry of Utmost Happiness is actually more unsettling because it is about broken people who bring shards of their broken hearts and ultimately make a mended heart.”

Roy lives with her characters for years till she knows what they do even outside of the book. Characters have categories like mothers are mothers, sisters are sisters and grandmothers will have a small bun and make mango pickle in every book, she jokes. The people from her book however, don’t fit into these set categories.

On writing The Ministry...

She admits she couldn’t have written The Ministry of Utmost Happiness had she not spent 20 years understanding and writing the essays that she did. “This fiction is something all the understanding that has absorbed and sweated out on your skin. Fiction is not an argument. My essays are arguments. Fiction is the universe. Essays cannot contain Biplab Dasgupta.”

A novel can be a city, she feels, in the way it is planned and unplanned and the way it grows. On the vast difference between her previous book and this one, she said, “The Ministry is not a book that you can read in one go like motoring down a city’s road and saying ‘Mujhe iss shahar ka sab kuch pata lag gaya hai’ (I know everything about this city). It’s a book that you get lost in instead. Even now when I myself read the book, I notice connections that I hadn’t surely planned. I could make it lovable like The God of Small Things or I could make it harder, spikier, less easy to embrace, more probing of what a novel is meant to be.... There was a time when writers were dangerous people. Now novel writers are increasingly becoming like stuffed toys living somewhere between bestseller lists and Booker prizes.”

I grew up with this absence and this idea of this place, it takes a little bit of time for that personal story to settle. I have rarely come here but I hope that will change soon,” said author Arundhati Roy on Calcutta, during her talk about her last book The Ministry of Utmost Happiness, organised by Kalam club at Calcutta Club on November 10. In conversation with author Sandip Roy, the evening kicked off with a throwback to In Which Annie Gives It Those One Ones — the TV film in which she acted as well as wrote the screenplay for. The film went on to win an award, which remains her “most favourite and precious award” till date. “A national award for best film in a language other than the ones specified in schedule 8 of the Indian Constitution. By the way, that language was English,” she said and laughed.


The God of Small Things was the story of a family with a broken heart at its centre so it’s easier for people to understand and love it. The Ministry of Utmost Happiness is more unsettling because it is about broken people who bring shards of their broken heart and ultimately make a mended heart
- Arundhati Roy


Sometimes when a magazine chooses to publish her essay, they also put her face on the cover and then the political becomes the personal, said Sandip. “I have learnt to ignore the initial noise and look past it as it is the matter and the depth of writing that counts at the end of the day,” she said. When her essays are still being read in colleges 20 years later, it must mean something. “I sometimes worry as to what would happen if they loved me instead? I mean if Arnab Goswami came to me and said ‘You are great’, I would have to kill myself,” she laughed.

She concludes the evening with the very elusive happiness and where she found it. “I met some young students today who do not have the same privileges as the ones seated in this audience do. I spoke to the girls especially and asked them to look at happiness differently. Getting married and having children is not the only form of happiness, while it could very well be just one form of it. Having found your freedom is what true happiness is. To me, however difficult some moments might be, the relishing of my freedom, to be able to write, to be able to think, to be able to be anarchic and ridiculous, that is happiness. When I put my face on my dog’s rather large stomach, I feel very happy.