The RSS: Challenging the secular polity of India

While it is crucial to scrutinize the RSS’s role, there are also deep concerns regarding its ideological agenda 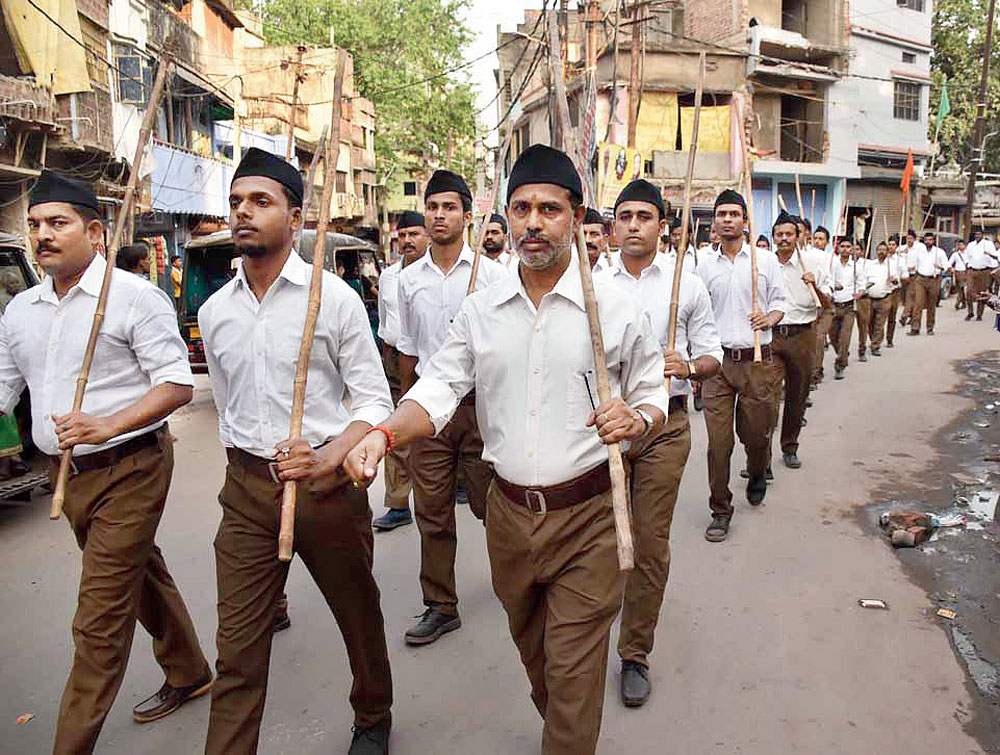 The return of Narendra Modi, a former pracharak of the Rashtriya Swayamsevak Sangh (RSS), as prime minister for the second term, and the tremendous majority that the Bharatiya Janata Party has garnered in nearly all regions of India barring the South underlines the significance of the role and contribution of the RSS in Indian politics. The RSS has good reason to boast that it has given two prime ministers to India: Atal Bihari Vajpayee (1998-2004) and Narendra Modi since 2014. While it is crucial to scrutinise the RSS’s role, there are also deep concerns regarding its ideological agenda. Some scholars are of the view that what comes out of the BJP campaign does not reveal enough about the RSS, which is why there is a need for a focused analysis of this organisation that has come very close to altering the foundational arguments of social harmony and political coexistence in India today. This seems to be driving the author’s attempt. He had earlier published a book titled The RSS and the BJP: A Division of Labour that was launched by Jyoti Basu in December, 2000.

This book -- The RSS: A Menace to India -- comprises 25 well-written chapters, which examine why and how the RSS came into existence, its role during the British days, and how it has operated and expanded in modern times to challenge — directly and indirectly — the secular polity of India. Some of these insightful chapters are titled as follows: “The RSS and Gandhi’s Assassination”; “The RSS, the Emergency and the Janata Party”; “RSS Selects India’s Prime Minister”; “RSS and Violence”; “RSS’s Progeny: ABVP, VHP, Bajrang Dal”. The book is dedicated to Nehru, Azad, Rajagopalachari and M.A. Ansari: the four towering personalities who played critical roles during the anti-colonial movement. The book opens with a quotation by B.R. Ambedkar from his Pakistan or the Partition of India that reads as follows: “If HINDU RAJ does become a fact, it will, no doubt, be the greatest calamity for this country... Hindu Raj must be prevented at any cost.” The prime minister in his maiden speech to the National Democratic Alliance MPs of the 17th Lok Sabha recently mentioned Ambedkar, but it would be helpful if he and his government paid attention to the reasons Ambedkar cited when he was giving a warning about a majoritarian Hindu State and its implication for India’s democracy.

The book has a long Introduction, in which the author has deliberated on many dimensions of the Indian debate on secularism — particularly on the legal side of the arguments, which I found very enriching. He has made elaborate comments on the J.S. Verma judgment that declared Hindutva was a way of life like Hinduism; scholars who argue for secularism are deeply critical of such juridical interpretations.

The following observation by the author perhaps best summarises the argument that he has built up and that runs through the entire book. He writes, “In 1994, the Supreme Court ruled that secularism is part of the unamendable basic structure of the Constitution. But no law can effectively deter a government from flouting this by administrative measures.” Further, he cites four factors in order to show how and why challenges to secularism have been confronted: firstly, secularism has been part of India’s political struggle that dates back to 1885; secondly, the history of Hindu revivalism can also be traced to the same period although it got institutionalised as the RSS and the Hindu Mahasabha later; thirdly, these organisations have been fighting secularism from their inception; and lastly, they were collaborators of the British colonial regime and played no role in India’s freedom movement.

However, in spite of the constitutional guarantee, it is possible that the RSS and the BJP would be able to pursue the communal agenda: the past few years have presented enough evidence in this regard. That is why there is a need to strengthen the resolve to fight these forces and their agenda politically instead of merely hoping that nothing would happen to India owing to the Constitution. All in all, this is a fascinating book, rich in analysis of various legal and political aspects — and almost convinces the reader of this veteran author’s description of the menace as indeed a serious one.

The RSS: Probing beneath the surface