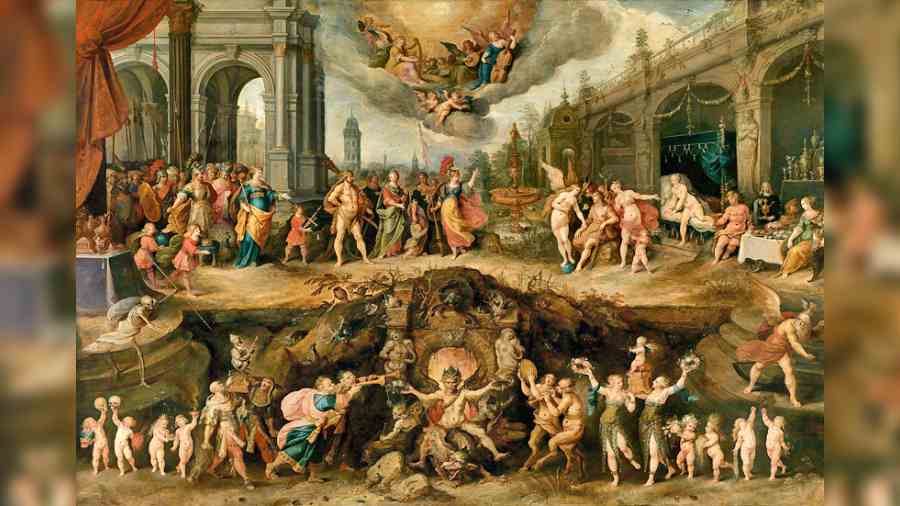 Mankind’s Eternal Dilemma — The Choice Between Virtue and Vice by Frans Francken the Younger, 1633
Telegraph Picture
Srimoyee Bagchi   |   Published 27.05.22, 02:26 AM

Book: The Devil’s Atlas: An Explorer’s Guide To Heavens, Hells and Afterworlds

Shakespeare’s Hamlet had wisely said, “The undiscover’d country from whose bourn/ No traveler returns, puzzles the will,/ And makes us rather bear those ills we have,/ Than fly to others that we know not of”. While few want to venture into the shadowy domains from where there is no returning, curiosity about these spheres that are beyond the reach of the living is as old as time itself. And alongside this curiosity have existed attempts to ‘map the unmappable’ — the cities, mountains, golden fields, demonic parliaments, rivers of blood and lakes of fire that make up the geographies of death in religions and cultures around the world. What are these places actually like and who are the beings that populate them? The Devil’s Atlas by Edward Brooke-Hitching charts the ways in which scholars, writers, artists and cartographers across centuries have risen to the challenge of pondering and then trying to answering these questions.

The book is richly researched: descriptions of ‘otherworlds’ have been collected from early Judaeo-Christian scriptures, oral Norse myths, puranas, Islamic hadiths and so on. It is a superbly illustrated volume that is divided into three segments: “Hells and Underworlds”, “Limbo, Purgatory and Other Midworlds” and “Heavens, Paradises and Utopias”. Each section is further subdivided by region and religion, and accompanied by cartographic and artistic representations of these realms and the deific and demonic figures that one might encounter there. Brooke-Hitching’s meticulous arrangement is key to enjoying a book with a dizzying plethora of facts and descriptions such as this.

The thread that ties these segments together is mankind’s effort to apply earthly metrics to these intangible worlds. For instance, volcanoes and caves are common gateways to hell across cultures, while verdant fields and trees that bear endless fruit are integral to the iconography of heavenly scenes. Unsurprisingly, Brooke-Hitching collates afterworlds that are frequently imagined in terms of the familiar: heaven has a surfeit of all the comforts that people crave on earth, while hell is filled with worms, hounds and pains that we try our best to stay away from, only in much greater measure.

Notions other than those of the good or the bad also inform cultural reconstructions of afterlife. The lands of the dead can be depressingly similar to that of the living. BrookeHitching writes that for ancient Mesopotamians, the “underworld is neither a place of joy nor abject misery, merely a dull and dried version of life above ground”. It is worse for the Chinese — renowned the world over for their torture methods — who envision hell as a bureaucratic labyrinth where the dead are forced to wander through waiting rooms to “find the official in charge of assigning their destination, repeatedly submitting petitions”. This being hell, there are, of course, endless administrative mix-ups to torment the lost souls. Indians, afflicted by the bureaucracy’s babu, should have construed something similar.

Ironically, one thing from life that is not carried into hell is unfairness. Be it in the eyes of the Florentine poet, Dante — he was instrumental in shaping the Western vision of hell through his narrative poem, The Divine Comedy — or in the Vamana Purana, hell is often divided into levels for varying degrees or kinds of sin. Dante, for instance, has a second level “where no thing gleams” for those guilty of lust — Cleopatra, Helen of Troy, Paris and Achilles are among its inhabitants — and a ninth and lowest circle for traitors like Judas, Brutus and Cassius who are being eternally devoured by Satan. The Vamana Purana is oddly specific when it comes to listing out the 25 “departments of Hindu hell” — disobedient children go to Aprathisth; people who steal sandals are sent to Kalmsikta; and those who copulate on holy days will find themselves in Shaalmali.

Pictorial illustrations — classical or scriptural, done in oil, ink or etching and found in manuscripts, literature and art galleries — of heaven and hell are plentiful. But the discerning reader will be able to spot a crucial difference when it comes to the depictions of the worlds that have been painstakingly gathered by the author. While paintings of hells and underworlds have an earthly geology and animality to them — they are also infinitely more graphic in order to scare the errant into submission — heavens are more vague in their perfection, their details blurred by dazzling light or impenetrable clouds. Just like the explicit images of hell are meant to terrify, the nebulousness of paradises allows the imagination to fill it with rewards of one’s choice.

Artists, though, had it easy. The empirical approach required by cartography made it difficult to situate these realms on the map but Dante’s Inferno was of great help to cartographers; he featured hell as a subterranean part of the earth, situated directly beneath Jerusalem in the form of a giant cone. Across time, myth and logic intersected in telling ways. No less than Galileo Galilei, one of the most significant figures of the Renaissance, tried to map Dante’s inferno, concluding that the boundary of hell’s roof must run beneath Marseille, France, in the west and Tashkent in modern Uzbekistan in the east. Yet, heavenly spheres could also be elusive and map-makers of earthly paradises like the Garden of Eden had a hard time. The Ptolemaic system of coordinates that dictated map-making made it impossible to pinpoint a physical location to correspond to that utopia where heaven and hell did not exist.

What makes the descriptions, maps and artworks collected here so fascinating is that they are attempts at achieving the impossible — a portrayal of the ineffabilis, that which is too great to be expressed in mere words. If there is one quibble, it is that condensing millennia of knowledge and characters into one volume makes it difficult to keep up with the multitude of cultures and the mind-boggling cast. It also does not help that illustrations often appear several pages after a place is first described.