This is Chapter 36 of The Romantics of College Street, a serial novel 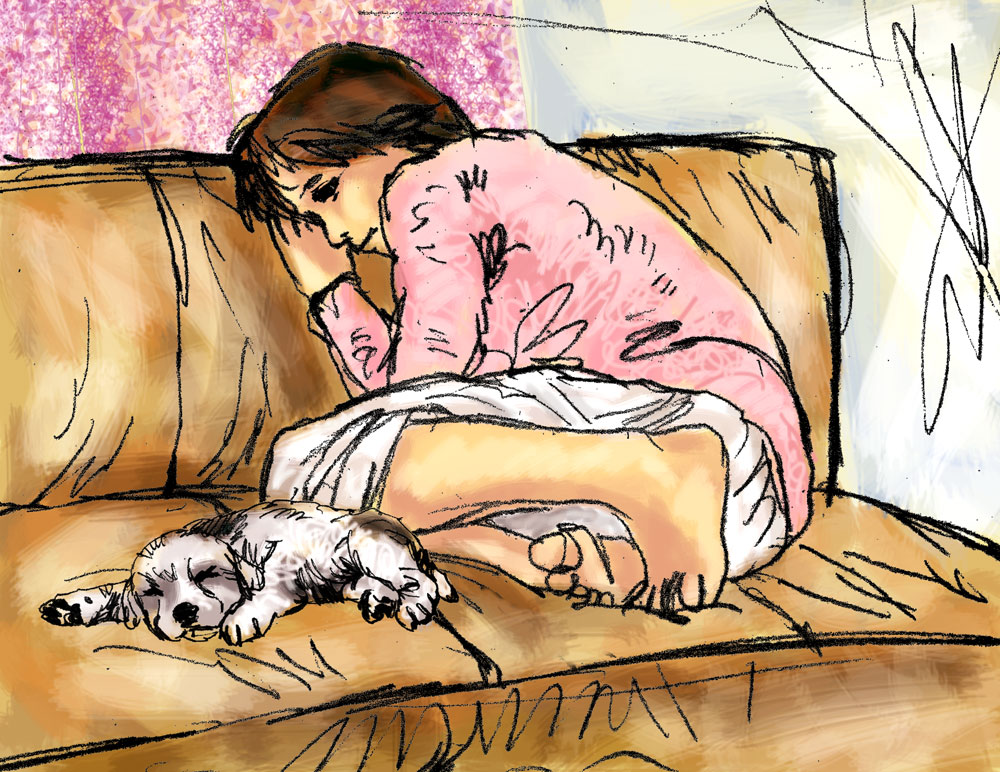 “When will Lata get here, Mama?” Pixie asked for the 99th time that hour. Nisha sniffed. It wasn’t that Nisha did not like Lata — she did — but her daughter’s adoration for Lata made her a little grumpy
Illustration by Suman Choudhury
Devapriya Roy   |   Published 16.02.19, 02:02 PM

If cities had superpowers,” Aaduri Bagchi mused aloud to Hem Shankar Tiwari on Sunday morning while they were reading newspapers in bed, “What do you think Calcutta’s would be?”

It was the sort of morning when the sun streamed in through windows with the energy of a boisterous child and tore at surfaces, curtains, walls, bodies, only to collapse in gentle golden pools everywhere: upon the bed, the ottoman, the mosaic floor.

“You mean,” Hem replied, thoughtfully, “What Calcutta’s superpower should be? Hmm, let me think.”

He folded the classifieds section into a precise rectangle. His hair was mussed, his morning stubble had left a faint trace of shadow on his fair skin. Aaduri observed how his brows were beetled together, his features wholly absorbed in her question. This was one of the qualities she found most endearing: Hem was willing to engage seriously with even the most eccentric of her notions — of course, it annoyed her too, this relentless generosity — but mostly it felt charming. (Not that she was going to tell him any of this.) But after the Professor, with whom she’d had to play the generous listener part, having to respond constantly to his literary stances, which were plentiful and elegantly obtuse, Aaduri felt quite pleased with the new arrangement. That’s what she was calling it. The new arrangement.

Lata had, of course, scoffed. ‘Arrangement-shmarrangement’, she’d said, her fevered voice sounding quite hoarse on the phone, “I knew it was only a matter of time.”

“How about self-cleaning?” Hem asked finally, “Too boring? Self-restoring then?”

Here’s what has led to this moment.

Short version: they’d been watching super-hero films last evening on Epic. First the Battle of New York and then the Battle of Sokovia — and the mounds of rubble the Avengers habitually left in their wake — led to Hem’s postulate. Self-restoring cities. Whether alien attack or plain old Father Time, the city would bounce back. Hmm.

Long version: Aaduri wanted to binge-watch Agents of S.H.I.E.L.D. (apparently to run a series of articles on comic-book science) and since Hem didn’t know S.H.I.E.L.D. from A.D.A.M., Aaduri was initiating him into MCU, one film at a time. Not that they had much time, between their still-colicky baby — the website which guzzled “liquid content” and immediately demanded more — and the terms of the new “arrangement” that had emerged between them, which had not been given a label yet, and which, if Aaduri had her way, would never be given a label, thank you.

Longer version: Sometime around Molly’s ashirbad-cum-ring ceremony, Aaduri and Hem had found themselves settling into a pattern. Hem would pick her up in the mornings, en route to Ghosh Mansion — or the office, depending — they’d grab a coffee and a croissant, they’d run into each other several hundred times in the newsroom, then, as evening fell, they’d go to Lata’s — or to one of the functions thereof — and finally, at night, he’d drop her back home. At some point, he began to come up for a nightcap. Aaduri’s orderly house, everything in its place, seemed an oasis of calm compared to his old-fashioned rooming house, that was, appropriately, called a mess in Calcutta.

The conversation never stopped. Aaduri told Hem about The Professor. Afterwards, Hem spent several hours maniacally Googling him. Hem read out his poetry to her — hand-written in a fat Allahabad Bank diary from 1999 — and she was unexpectedly moved by it. By the quiet revolution in his verses, the sense of youth passing too slowly and then too quickly, by the images of Allahabad that bled into his lines — city by the confluence of three rivers — and by the nuance of his vocabulary. The night of Molly’s sangeet, for the first time, he stayed over.

Since then, they’d discovered unknown continents in themselves and each other.

Sometimes these days, Aaduri tried to remember what life had been like before this one week and found herself blanking out. Yes, there used to be time for things like grocery shopping, ironing, cleaning the refrigerator and calling friends and responding to WhatsApp messages from Tiana late at night. But even the specifics of those seemed fuzzy. How had she lived in the past?

She felt a tiny bit horrible at how soon she was thinking such things, how quickly The Professor’s shadow had begun to recede, and how quickly spring had begun to course through her veins, that tried to edit herself whenever such thoughts sprung up like defiant shoots of green. “Calm down, you ridiculous creature,” she wanted to tell her heart. But her heart had no patience.

“If a city could restore itself then it would never age,” Aaduri said reflectively.

“But,” they both began together, then stopped.

“But without decay, how would we appreciate youth?” said Hem finally.

“Without destruction, how would we appreciate love?” Aaduri smiled.

“Oh, is Lata here already?” Hem jumped up from the bed. “I’d better shower and get dressed. Have you finished packing?”

But it was only the maid, Nalini.

Around 10, Lata arrived, in a cerise jumper and a pair of dark glasses. Apparently her eyes were red from the mysterious sickness. Nalini had breakfast on the table and Aaduri and Hem were both ready and waiting, slightly edgy from facing Lata, the first witness to the new arrangement.

“So are Duma and Goopy taking the train?” Aaduri asked, after the initial oh-you-guys-look-so-adorable and Aaduri-stop-looking-cranky-when-you’re-secretly-elated and Lataji-it-is-all-because-of-you-s had been dispensed with. They slathered peanut butter on their toast. (At Aaduri’s, for breakfast you always had peanut butter, jelly and Nutella, and masala tea and cheese omelettes. Lata, who was passive-aggressively figure-conscious in the manner of many beautiful women, invariably critiqued the menu, told Aaduri to grow up, and then proceeded to eat heartily.)

“Oh no, they are going with Ronny later today. Jethi had some work in the bank this morning. They met Ronny at some book launch a couple of days ago, and he invited them to tag along.”

“I hope you realise that he wanted you to tag along,” Aaduri smiled.

“Oh look at you, Ms Bagchi, all mellowed by luuurve,” Lata smirked. “Nothing like that. Bobby is organising this trip. We all know her views on me. Also, I couldn’t pass up the opportunity to hear Hem’s poetry.”

Hem started. Lata gave him a playful little shove with her elbow. Aaduri called for tea.

“Why does Bobby hate you, Luts?” Aaduri said, “Is it a territorial thing? Or is it genuine –— like she’s worried you’ll upset his life, become this big influence on him, and like Nadira Naipaul throw out all the old friends from his life?”

Lata waved away her words airily — she couldn’t care less about Ronny Banerjee’s entourage, she wanted to say — but her eyes twinkled and the amount of Nutella she smeared on her toast suggested that she was in a remarkably chipper mood.

“When will Lata get here, Mama?” Pixie asked for the 99th time that hour. Nisha sniffed.

It wasn’t that Nisha did not like Lata — she did — but her daughter’s adoration for Lata made her a little grumpy. Here she was, plodding behind Pixie all the time, planning and plotting with Bappa to give her a well-rounded life, all the advantages of their upper-middle-class existence, with nannies and drivers and whatnot, but also the right values, the sort of middle-class upbringing that she and Bappa themselves had had, and persevering with her full-time mom role even though Tilo seemed to sneer at that choice. And here was her daughter, besotted with Lata Ghosh.

She checked her phone, “No updates, Pix,” she replied wearily, “I’ve told them to call once they’re close.”

The guest house had been spit-polished in anticipation of Lata’s arrival. Since Nisha could not herself make too many things in the kitchenette here — she was a decent cook — food had been ordered for a fancy tea-party from Brubeck. Lisa, the nanny, was stuffing Posto into an attractive red romper as he waved his fat arms about merrily. Pixie herself had chosen her clothes carefully: a white dress with ruffles they’d bought from Mini Boden just before returning to India, paired with a pink cashmere sweater that had sparkles on the front placket. The entire outfit was worth more than Lisa’s monthly salary, thought Nisha annoyedly, though, of course, the annoyance was somewhat misplaced since she and Bappa had bought it for Pixie themselves.

It was another hour when Lata finally arrived at their doorstep. She found Pixie, fast asleep on the sofa, in her perfectly aristocratic outfit, exhausted from all the waiting. It was Scone who rushed out to welcome the party. And as per his mistress’s instructions, after perfunctory barks at Aaduri and Hem, he threw himself upon Lata Ghosh and covered her hands and face with hundred welcome licks.

Recap: The furious activity of the wedding leaves Lata with a fever. Meanwhile, Ronny, even knowing somewhere that Shomoy may not materialise, is sort of relieved.