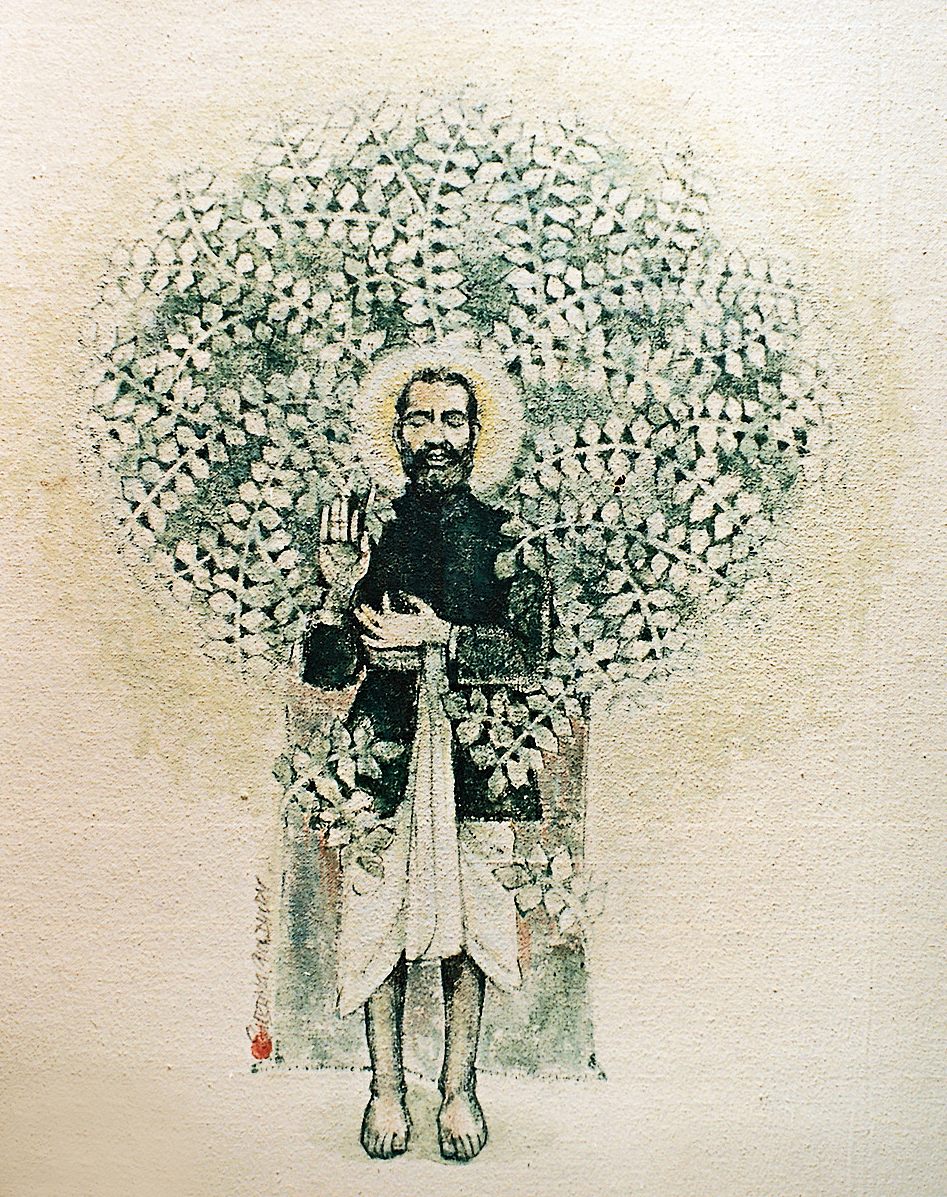 A painting of Sri Ramakrishna by Subrata Choudhury
(The Telegraph file picture)
Pravrajika Prabuddhaprana   |   Published 09.09.19, 08:02 AM

Ayon Maharaj calls Sri Ramakrishna a glutton for spiritual experience — he had an insatiable desire to experience God in every religion and sect. Sri Ramakrishna concluded that no one who has experienced Ultimate Reality as both with form or formless, personal or impersonal, can have complete knowledge of God in all His infinite facets. Given that human intelligence is limited, Sri Ramakrishna asks: can a one-seer pot hold ten seers of milk?

All previous attempts to label his philosophy comprehensively have failed to give a true picture of it. Ayon Maharaj, by dint of his fine academic skill and deep study of Sri Ramakrishna’s documented conversations and authentic first-hand biographical analysis has been able to give us a more complete understanding of his philosophy than any before, for which he coins the name, “Vijnana Vedanta”.

It is well worth the effort for the general reader to wend their way through Maharaj’s academic jargon. Professed devotees of Sri Ramakrishna, in particular, ought to have a clear idea of the implications of Sri Ramakrishna’s philosophy presented in this book.

The book is divided into four parts: (1) the infinitude of God; (2) religious pluralism and its relevance today; (3) mystical experience and its verification, and (4) the problem of evil, which examines Sri Ramakrishna’s view of God’s grace versus karma. Noting how Sri Ramakrishna’s teachings influenced some of the key figures in modern Indian thought, Ayon Maharaj then constructs a dialogue with notable Western philosophers on various religious tenets.

According to Sri Ramakrishna’s standpoint of Vijnana, each religion makes a valuable contribution to our understanding of God and spiritual life. He insists that we should not merely tolerate other religions, but learn from them. Sri Ramakrishna’s analogy is that one should not play a single monotonous note on the flute. He warns his chronicler, Mahendranath Gupta, against becoming fanatical with regard to his own ideas about whether God has form or is formless, and again, when he expresses his doubts about reincarnation, Sri Ramakrishna tells him: “It is enough to believe that all is possible in God’s creation. Never allow the thought to cross your mind that your ideas are the only true ones, and that those of others are false.” When Sri Ramakrishna went on a steamer with Keshab Chandra Sen and his Brahmo disciples, Sri Ramakrishna sang for them, not a song about the formless God that Brahmos worship, but a Vaishnava song about the love and longing of Radha for Sri Krishna. He wanted to teach the Brahmos that the important thing was to have feeling, a longing for God.

Ayon Maharaj points out that on the basis, not of any intellectual construct, but of his own mystical experience, Sri Ramakrishna taught the harmony of all religions. He gives the analogy: “A mother prepares dishes to suit the stomachs of her children. Suppose a mother has five children and a fish is bought for the family. She doesn’t cook pilau or Kalia for all of them. All have not the same power of digestion; so she prepares a simple stew for some. But she loves all her children equally...” God has made different religions to suit different aspirants, times, and countries.

The main source of religious fanaticism, according to Sri Ramakrishna, is the tendency to confuse means and end. Instead of practising a particular religion as a means to the end of spiritual fulfilment, religious dogmatists tend to regard as absolute religious doctrine itself, thereby losing sight of the Divine Reality that is the goal of all religions.

As for his definition of religion, Sri Ramakrishna hints that any religious or spiritual path must have at its centre some aspect or form of the Divine Reality, whether personal or impersonal; second, it must prescribe ethical and spiritual practices that bring us into contact with that Divine Reality. Any so-called religion that prescribes unethical practices such as violence, hatred or self-indulgence would not count as religion. In a footnote it is asked whether Sri Ramakrishna would have accepted the religiously inspired terrorist groups such as ISIS and Aum Shinrikyo as genuine ‘religions’. Maharaj answers that, “Sri Ramakrishna would not have accepted them as religions (dharma), since they prescribe unethical practices that violate the second condition that any religion must meet.”

Maharaj concludes: “Sri Ramakrishna’s teachings on the harmony of religions remain as timely as ever. Almost daily, we hear of atrocities committed in the name of religion in various parts of the world. In such a contemporary climate, it is imperative that we work collectively toward developing a strong philosophical foundation for interreligious dialogue and understanding.”

After reading Ayon Maharaj’s clear exposition of Sri Ramakrishna’s philosophy, one feels that in the inter-religious dialogues today, each religion remains like a bouquet of cut flowers. On the other hand, in the sunlight of Vijnana Vedanta their roots are intact and they will continue to be nourished and bear fruitful philosophical thought and action in the future.