This is the 13th episode of the author’s serialised novel Nonsense and Respectability, published every Sunday 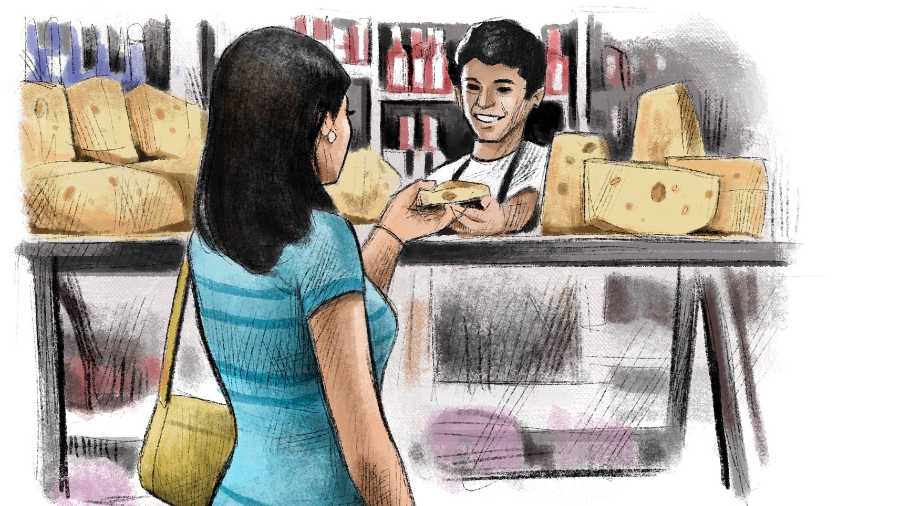 Recap: Even as Aparna, Raahi and Zaara discuss where the Seher-Saahil relationship could go, the latter makes his first overture.

A sliver of the hard white alpine cheese was cut and handed to Raahi, who was trying not to smile like a cat in anticipation of the canary. She bit into it and savoured the silky taste of the Swiss on her tongue. Gruyere was always such a delight. This one was particularly salty, with only the slightest hint of tangy sweetness. It must have been a young cheese, not fully matured to nuttiness. But then, they were shopping at Foodhall on Linking Road, not at a farmer’s market in France. And, in the opinion of her eldest daughter, even that was too much.

Thank God Seher was upstairs, buying the ghee and apples and whatever other ‘essentials’ she thought necessary for them to contribute to the Khans’ pantry since they were imposing upon their hospitality for another week. Aparna had determinedly refused the offer to replenish her kitchen but Seher had insisted even more determinedly and now both of them were at the billing counter fighting over who pays for the garam masala and who the almond milk.

The more profligate family members had been asked not to interfere but to wander the store and sample its delights. A more dangerous proposition than Seher had realised. Because, for Raahi and Zaara, when it came to food, fashion or men, to sample was to desire. And to desire was to have.

“I’ll take it,” Raahi said, with a rebellious grin as she popped the last sliver of the cheese into her mouth.

The shop assistant smiled at her as though he was in on the mischief and began cutting up and weighing a large slice of the Gruyere. Raahi dropped her gaze from the scales and pretended not to see the label slapped against the cellophane as he wrapped it up for her. Now that she’d decided upon the little luxury there was no point in worrying about the price. And then, it would be shamefully conspicuous to try something and not purchase it. No need to give the female customers more to gossip about. There had been enough eye-widening and phone-tapping amongst some of them when they walked into the store.

For this reason, Raahi resisted the urge to pop into her mouth one of the fat black olives from Cyprus laid out on the charcuterie board. If she couldn’t buy it, she wouldn’t try it. She refused to appear wanting to the catty women who were watching. She refused to give them another opportunity to revel in her humbling.

Searching for comfort, her eyes flitted to her pride. Zaara, oblivious, was scooping out a bit of the soft Brie with the tip of her thumb and happily sucking on it. But then, Raahi thought with a smile, when one is young and beautiful one can take all sorts of liberties. Instead of appearing pitiful, her daughter in her floaty white dress and sleepy tousled hair, seemed like an advertisement for the charcuterie of the grocery store. All of the male clientele, both beer-bellied fathers and their protein-pumped teenage sons, had strayed to the basement with a sudden interest in wine pairings for Brie.

“Would you like a Pinot Noir to go with that ma’am?” the helpful shop assistant asked Zaara, who had taken another scoop of the Brie with a cracker and was crunching it with relish.

She didn’t bother blushing in apology. Nor did she flick a glance at the many men watching her. Instead she turned to her mother with hopeful blue eyes.

Oh why the hell not.

“Sure,” Raahi relented. “You can give us a bottle.”

Zaara hesitated. Then dropped her voice to a tentative whisper. “There are six of us at home Ma.”

But then, one couldn’t return home with just one bottle of wine could one? Two bottles was just about enough for five people, even if Aparna chose to continue her abstinence. If everyone drank two glasses at least…

“Alright give us two bottles,”

“No, no need for that,” Zaara said, firm, even as she licked her lips, savouring the last of it.

Raahi’s heart lurched. Her daughter, who had become vegan six months ago, against Raahi’s advise, had finally, finally eaten some dairy. No matter what the studies said, Raahi fiercely believed that milk, meat and honey were essential for Kashmiri girls to remain strong. It was what her mother had raised her on. And Raahi credited that diet for the strength and endurance that had carried her from a little refugee chawl in Bombay to the starry peaks of cinema.

Perhaps she was imagining it, but she felt there was already a little more brightness in Zaara’s eyes. A little more pep in her step.

“And the salami. And give me 500 grams of honey-baked ham. And some smoked salmon.”

Zaara looked at her in surprise. Raahi knew her mouth must already be watering at the sight of all her past favourites being loaded into their grocery cart.

There would be a little tussle with Seher, Raahi was sure. But this was for her child’s health. It was worth every rupee.

“And the organic honey please,” Raahi commanded. “And the Camembert. The whole wheel.”

As the relentless beeps of the cash register kept sounding, Aparna’s phone buzzed yet again.

So far, her lawyer Bhatia, her cook Ali Saab and her sister Sangeeta had called. Aparna had silenced them all, wanting to enjoy her excursion with the Pandits uninterrupted, but if her sister was calling a second time, it must have been urgent.

“I seem to be surprisingly popular today, don’t I?” Aparna excused herself with a chuckle.

Seher managed a weak smile. It was all she was capable of at that moment, given that her mother and sister had decided to spend a considerable portion of their inheritance on cheese. At least Aparna was too busy to try to pay now, she thought with relief, and they wouldn’t owe her this obscene amount, over and above all that she had done for them.

Raahi avoided Seher’s gaze as the grocery bill kept racking up, beeping past the monthly salary of some data analysts.

“Should we start taking things out?” Zaara whispered to her sister, blushing. The thrill of plonking in Ritu Kumar Home’s pretty paisley-patterned plates was suddenly wearing off.

“Yes,” Seher said, trying to keep the irritation out of her voice, “I don’t think we need four jars of candied pecans...”

“They’re Aparna’s favourites” Zaara whispered, albeit shamefully. “We’ve finished so many of hers that I thought...”

“What nonsense!” Aparna growled, suddenly from a few feet away. “Nobody is being taken advantage of!”

Seher’s back stiffened. That was Saahil’s mother Aparna was speaking to. And Seher knew very well what opinion Sangeeta Pratap Singh held of her. It had been evident from the things she had heard her yell at Saahil over FaceTime in his apartment in Kent. Her friend might have thought that putting his AirPods in and moving to the kitchen would shield Seher from abuse, but Sangeeta Pratap Singh’s voice was shrill enough that Seher had caught every damning word.

Seher wasn’t a parasite. And nor was her family.

“Exactly Sangeeta, it’s my house. I can invite whoever I want to stay however long I like!” Aparna whispered, furiously. And then, softer still, “No. She isn’t on the ‘hunt’ for anything.”

There was a sharp intake of breath. But not from the Pandits.

Seher looked to the right and realised that the lady in a denim shirt and matching jeans had suddenly occupied herself with the protein bars at the counter. Her cheeks were tinged pink with the embarrassment of eavesdropping. But her eyes were alight with the thrill of it.

And to her left, the family of four with all the Doritos bags was pretending not to side-eye them, while ringing up their groceries.

Seher tilted her head up, as high as she could without appearing ridiculous.

“Don’t take anything out,” Seher said firmly, to both Raahi and Zaara’s surprise. “We’ll take it all.”

She took out her Platinum debit card which held all her generous birthday presents from loved ones over the years. Raahi’s mouth dropped open. That card was Seher’s last safety. She hadn’t touched a penny of it since she was 10 years old. The only benefit of growing up untrusting of everyone else was that you were always saving for a rainy day. Well, it was pouring now. And it was time for her to pour it out.

The cashier took the card from Seher and swiped it with the impersonal smile of any well-trained retailer. With a quick flick, Seher’s piggy bank was broken and the bags were handed to an ashamed Raahi and a stunned Zaara.

Aparna scurried back immediately, phone to her ear. “What do you think you’re doing?!”

“We have a running tab here.” Aparna turned to the cashier, furious. “Don’t you know not to ask for payment when I’m here?!”

Seher was glad, for the first time, of having an audience.

Let them all know, she decided with a defiant tilt of her head. The Pandits pay their own way.

“Let’s not worry about money, Aparna,” she spoke clearly enough for everyone who was listening in to hear. Then putting a gentle arm around her excitable aunt, she added, “Let’s just get home and get cooking. The boys must be hungry.”

There was a definite click from Aparna’s phone. And then the screen lit up.

The line had been disconnected.

Seher smiled, glad for the first time, that Saahil’s mother had been on the receiving end. 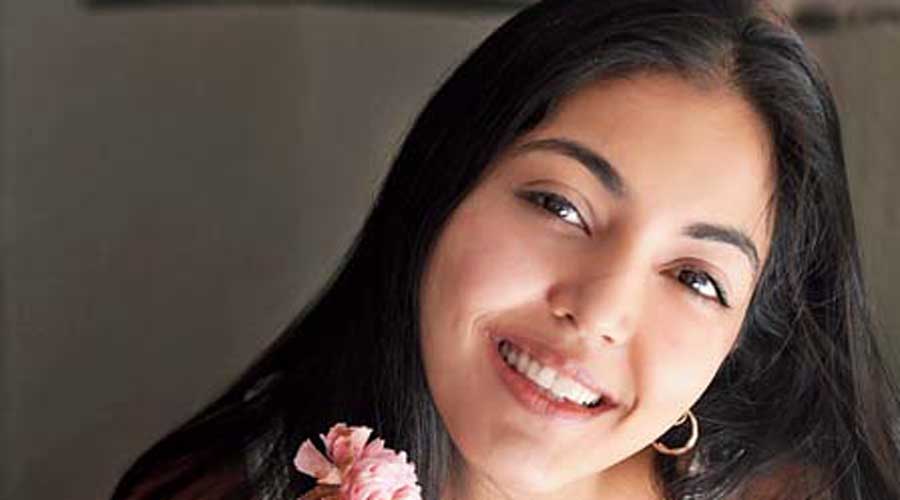