Sangeeta Dasgupta’s book, is certainly an essential read for students of ‘adivasi history’ 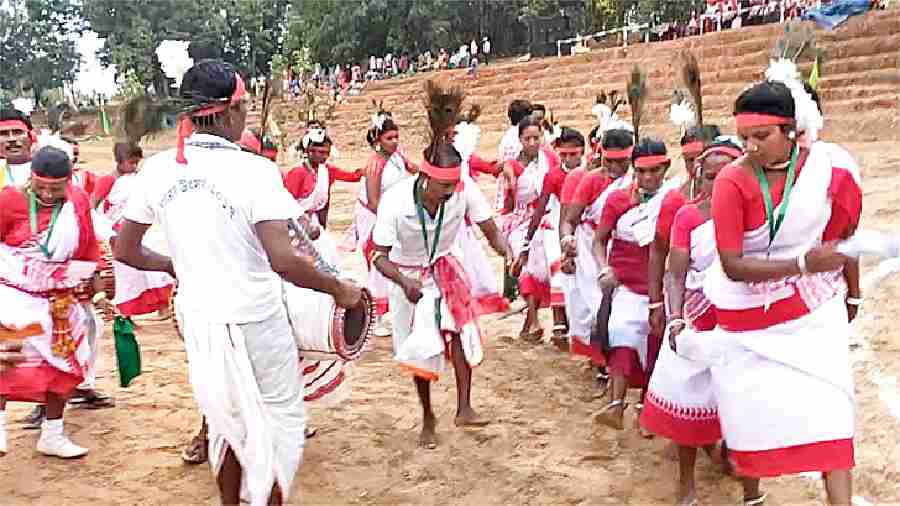 The construction of the ‘adivasi’ community can be seen as a political act, which attempted to provide an alternative discourse to counter the paternalistic ideology of the State, which used the term, ‘scheduled tribes’, to address the problems of these sections.
File Picture
Archana Prasad   |   Published 13.05.22, 03:51 AM

It is well known that the politics of adivasi identity has emerged as an important political force since the colonial period. Its political actions have focused on claims on ancestral territory, territorial and institutional autonomy and other questions related to historical deprivation arising out of uneven development. The protagonists of ‘adivasi’ politics have also represented themselves as ‘indigenous’ people with unrecognized rights This broad trend has multiple trajectories that manifest themselves in local and regional struggles, which raise the voices of these oppressed sections against the State and other segments of the ruling classes. Thus, the construction of the ‘adivasi’ community can be seen as a political act, which attempted to provide an alternative discourse to counter the paternalistic ideology of the State, which used the term, ‘scheduled tribes’, to address the problems of these sections.

In this context, scholarly interpretations of the evolution of adivasi politics have raised several definitional problems: what do we mean by ‘tribe’ or ‘adivasi? Who are the ‘indigenous’ people? Sangeeta Dasgupta’s book, Reordering Adivasi Worlds: Representation, Resistance and Memory, is an important attempt to address this critical question. As Dasgupta explains, the book “seeks to unpack the postcolonial understanding of the ‘tribe’ by unpacking colonial ethnography, missionary narratives and anthropological writings; it explores adivasi identity and resistance.” These themes are explored through an interesting narrative of the ways and the voices of the Oraon of Jharkhand, particularly those of the Tana Bhagats, and their movement in the early twentieth century.

The first part of the book explores competing dominant narratives on the concept of the ‘tribe’ in three different strands of work. First, the author analyses how the category of the ‘tribe’ acquired a particular definition through the codification of cultural practices and traits by colonists. This process of authentication of what is a ‘tribe’ continues to inform contemporary policy. Second, the book contains important analysis of missionary narratives that documented oral traditions, language and culture of the Oraon and shaped the colonial understanding of the ‘tribe’. These texts provided visibility to selective voices and also resulted in the polarization of the ‘Christian’ and the ‘heathen’ Oraon. This shows that the method of representation of oral traditions creates fixed identities, which have even influenced contemporary politics and policies. Third, the author explores the work of Sarat Chandra Roy and his ever-evolving practice of anthropology. It is argued that the scientific evolutions and the revisions in Roy’s work among the Oraon provide insights into understanding the ways in which the notion of the ‘tribe’ has been refigured with changing times.

The idea that the notion of ‘tribe’ and ‘adivasi’ is dynamic and, to some extent, contextual, is carried through in the second part of the book, which explores the oral traditions and the cultural practice of the Tanas. The author shows that the Tanas have multiple narratives, which are and can be contextualized in their material and political reality. It is argued that the Tana Bhagat movement was not merely a response to the changing agrarian landscape and the oppression of non-Oraon ‘outsiders’, but it was also a protest against the hierarchies within the Oraon themselves. By the first decade of the twentieth century, the Tana oral tradition and resistance articulated their own conception of their past and their future aspirations. They interpreted Gandhi and non-violence within multiple frameworks and retold their oral traditions in order to put forward their own ideas of nationhood.

Dasgupta concludes her important narrative by stating, “I feel an unease as the experiences of Tana Bhagats cannot always be fitted into the frame of a professional historian… By imposing through the flattened language of the ‘modern’ a singularity of events, it erases the multi-vocal and thereby precludes other possibilities and other touchstones through which the Tanas viewed their world. Their everyday practices cannot always be understood with the fair doses of a rationality that the discipline of history requires of its practitioners.” Dasgupta refuses to answer the question that she raises: what changes do the historians’ craft need to understand the ‘adivasi’ reality?

In this sense, the open-ended conclusion of the book avoids controversial issues and debates associated with contentious contemporary debates on the relationship between ‘history’ and the ‘present’ in the study of adivasi politics. Nevertheless, the rich and complex narrative of the book presents an important methodological lesson for social scientists who are dealing with problems of identity and social change. It is certainly an essential read for students of ‘adivasi history’.