Spanning the 18 chapters of 'The World Beneath' Their Feet', Scott Ellsworth charts the trajectories of all the 28 Himalayan expeditions that took place between 1931-1953 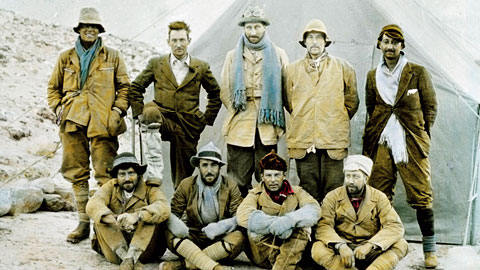 Book: The World Beneath Their Feet: The British, the Americans, the Nazis and the Race to Summit the Himalayas
Author: Scott Ellsworth
Publisher: John Murray
Price: Rs 699

The World Beneath Their Feet narrates the story of the great Himalayan mountaineering race that took place in the first half of the 20th century — a contest among individuals and diverse nations of the global North to summit Everest and other Greater Himalayan peaks, climaxing in the Everest summit attempt by the New Zealander, Edmund Hillary, and Sherpa Tenzing Norgay in 1953. Before Hillary and Norgay there were others, less successful, but equally resolute: this book tries to retrace their footsteps and relive their passion for what Robert Macfarlane calls “the exact, egalitarian sunlight of high places.”

If the first three Everest expeditions (1921, 1922 and 1924) were sold as scientific ones trying to locate geo-physical details of the region, the expeditions that followed, Ellsworth argues, were marked by a new, unfettered passion for climbing. He jump-starts his narrative from the point George Mallory and Sandy Irvine disappear during the 1924 Everest expedition (picture), and locates the efforts of stiff upper-lipped gentry of the British Alpine Club to launch a new Everest expedition soon after. But the immediate trigger was a failed Kangchenjunga summit attempt by a German, Paul Bauer.

Spanning the book’s eighteen chapters, Ellsworth charts the trajectories of all the twenty-eight Himalayan expeditions that took place between 1931 and 1953. Fast-paced, seldom stopping for breath, the narrative manages to pack in a wealth of ancillary information. Cheer-led by Lady Houston, the failed 1931 Everest Expedition resembled the glorious march of an imperial caravan: some 1,100 colour-coded wooden crates were shipped from London to Calcutta, transported by train to Darjeeling, and loaded onto 300 donkeys and yaks. As the slow climb began — after the long 300-mile trek from Darjeeling to the Everest foothills — ninety Sherpa porters, already overburdened with the tents and mountaineering equipment of the sahibs, lugged the precious crates to Mallory’s abandoned base camp. These contained tinned sardines, Heinz beans, Brand’s meat essences, biscuits, jams, jellies, canned milk, coffee, tea, Ovaltine, maple sugar, chocolate, Horlick’s malt tablets and an overflowing stock of Johnnie Walker whiskey. (Compared to the 1924 expedition, these provisions were rather plebeian: Mallory’s team had transported ample quantities of tinned quail in foie gras and vintage Montebellos). Percy Wyn-Harris, a climber who had earlier accompanied Eric Shipton on his Mount Kenya expedition, condescended to converse with the Sherpas in Swahili. Meanwhile, surviving entirely on tsampa, the Sherpas huddled in canvas tents, and were forced to defecate in the open in the bitter cold of the high altitudes. It goes to Ellsworth’s credit that despite his occasional relapse into raj-era nostalgia and a fanboy-like insistence on the greater capabilities of the English (“a globetrotting race of determined daredevils”) over their French and German counterparts simultaneously attempting to climb the Annapurna, Kangchenjunga, or the Nanga Parbat, his narrative does not exclude the silent, exhausted Sherpas who died by scores owing to frostbite but helped these luckless sahibs in their summit runs.

The World Beneath Their Feet: The British, the Americans, the Nazis and the Race to Summit the Himalayas by Scott Ellsworth, John Murray, Rs 699
Amazon

Among the book’s long cast of “failed” heroes, Eric Shipton shines the brightest. In 1933, the year in which James Hilton was busy drafting the ridiculous contours of his Shangri-La, twenty-six-year-old Shipton along with Bill Tillman changed the rules of Himalayan mountaineering forever. Deciding to go small — sharing tent, food, and equipment with Ang Tharkay, Pasang Bhotia and Kusang Namgir, recognizing them as “fellow mountaineers”— they upset the strict colonial divide between the sahib and the porter and became the first humans to cross the Rishi Ganga and set foot inside the Nanda Devi sanctuary. The 1933 Everest Expedition had cost more than £11,000; Shipton and Tillman managed their expedition by spending around £143 each. Two years later, Shipton was off again, trying to climb Everest; and again in 1936; once again in 1951, trying a new route over the Khumbu glacier, and failing ever gloriously. Of the book’s lesser-known heroes is Maurice Wilson, who flew a single-propeller ramshackle aeroplane from England to India in 1933, played cat-and-mouse with the British police while attempting a solo climb of Mount Everest. Disguised as a Tibetan monk, Wilson made it successfully to Camp Three. On May 31, 1934, before walking away into the snow, he pencilled his last entry in his diary: “Off again, gorgeous day.”

The book leaves its reader thinking of climbers like Shipton, Bauer, Maurice Herzog and Adam Karpinski and their witnessing of the mysteries of the high-altitude skies. In Ellsworth’s account, Frank Smythe, who had accompanied Shipton in 1933 and managed to climb a quarter mile short of the Everest summit, before losing out to a sudden snowstorm, shares a subtle hint: “In between the flying rags of mist the sky was green, not the warm green of grass and trees, but a cruel feline green utterly unmerciful. Yet the sight of it rekindled hope.”