Advertisement
Home / Culture / Books / Many poets in one

Many poets in one 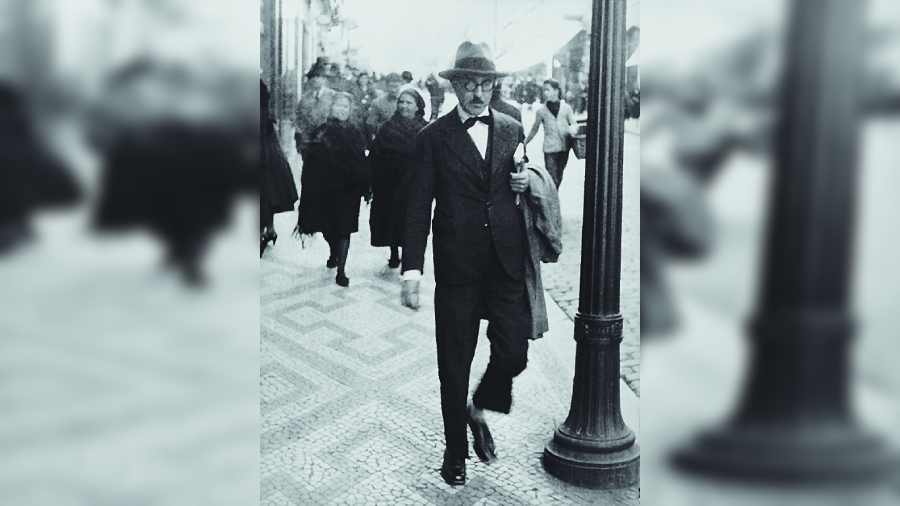 In his novel, The Year of the Death of Ricardo Reis (1988), José Saramago imagines the Portuguese poet, Fernando Pessoa (1888-1935), visiting one of his many writer-selves, Ricardo Reis, soon after his own death, proclaiming, “no one is truly alive or truly dead”. This could be a motto for the creative madness of Pessoa, defying any mundane distinction between the living and the dead by endowing each of his fictional noms de plume —’heteronyms’, as he called them — with varied parameters of living and dying and writing. I am reminded of T.S. Eliot who had originally given “The Waste Land” a far more dramatic title in ‘He Do the Police in Different Voices’; one may debate whether Pessoa was finally a Modernist, but his theatrical obsession with multiple, fragmented, silent, masked, resurrected and appropriated voices in and as text is undeniably revelatory.

Richard Zenith’s literary biography of Fernando Pessoa — expansive and intricate, razor-sharp and riveting — plunges us into the extraordinary life of that mind, turning on the creation of more than seventy imaginary writers (of poetry, prose, criticism, fragments), all of whom were figments of his marvellously fertile, fermenting, fomenting brain. Pessoa, whose name translates as ‘person’, spent a mysterious literary career rejecting and overturning this notional singular and died in Lisbon aged forty-seven with Mesangem (Message), an unspectacular book of poems in Portuguese, and a couple of unremarkable collections in English to his name. Soon after his death in 1935, however, a large trunk was discovered in his home, which contained innumerable poetic treasures ascribed to a merry melee of pseudonyms, the most enduring of which constituted his retinue of ‘heteronyms’.

The trunk was an artifact of sheer magic that gave and gave, flooding the world with a wealth of Portuguese pens we know — Alexander Search, Alberto Caeiro, Álvaro de Campos, Ricardo Reis, Bernardo Soares (the last, signatory to The Book of Disquiet, arguably Pessoa’s best-known work made up entirely of poetic prose fragments) — all finally sinking into the heaving sea of the writer-fount who was, already and always, Fernando Pessoa. And this sparkling phenomenon — of a procession of Pessoas-by-many-other-names emerging after his death — anointed him posthumously as the most versatile and prolific, the most inventive and imaginative, and the most gifted with words and ideas of Portuguese poets of the 20th century.

Richard Zenith set himself an impossibly difficult and unique task. But clearly, no one could have done a more splendid job of it, in well over a thousand pages — this biography is as radiant as Pessoa’s mind was, and it tells a rocking good story, as Pessoa’s life surely lends itself to. A lesser scholar-translator-biographer might have been paralysed for not knowing where to start or go with it; Zenith — veteran archivist and translator of Pessoa, long-time resident of Portugal and winner of its prestigious Pessoa Prize in 2012 — completes his gargantuan project with such panache that it seems to pirouette, fly and dive with a light all its own.

With the smorgasbord of literary delights that his subject had left to be decoded, one would think that Zenith had far more to cram into his biography than he could possibly cover. But this spirited raconteur embarks on it with surgical precision, offering us a virtuoso performance, just as Pessoa’s life was one giant cartwheel of endless performances. He begins by listing the ‘dramatis personae’ of a selection of Pessoa’s ‘heteronyms’ with ‘biographical notes’; then pulls back chronologically to the poet’s birth and family history to start over. He is able to pack his book tightly with information, quotations, literary criticism, speculation and stories — such astonishingly rich and tangled stories — because he can write prose that is magnificently layered, where three sentences do the work of three pages: “Proud and independent, occasionally even insolent, Fernando was at the same time mild-mannered, timorous, preferring indoor games to rough outdoor play. He could be violent in his words, never in actions. He was also, already, a very private individual.” (p. 81)

It is with an exquisite skill that Zenith weaves, like multi-hued flowers, the lives of Pessoa’s fictitious heteronyms into the braid of Pessoa’s own life-story teeming with events, emotions, intellectual upheavals, unhappiness, fleeting joys and an astounding secret occupation of creating entire worlds for each of his imagined writing companions. Zenith recreates Pessoa’s life — with his mother, stepfather and siblings, with his friends, acquaintances, a lady love perhaps, his bi-curious existence — and the lives of his many alter-writers who sometimes fuse one into another or simply disappear when their time is up, but then creates a world for them where they all breathe and move, the living and the never-alive together and at once. This eloquent, intricate, sweeping chronicle of many-poets-in-one is a literary overreacher that mimics Fernando Pessoa’s own creative overreaching with an acuity that leaves one breathless.