Remembering MAD and how it changed the world of satire 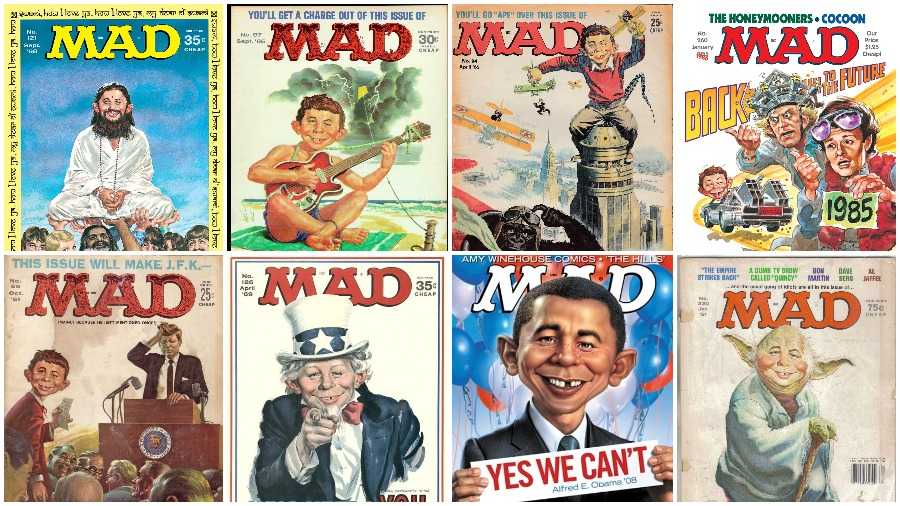 When Mad magazine decided to shutter after 67 years of publication in 2019, legendary Mad cartoonist Sergio Aragones said: “Age hits everybody: It hits magazines, it hits the movies, it hits technology. It’s been a logical development.” True. But equally true is that some stories, some jokes refuse to die even with age, like the zillions that have had appeared in the iconic publication of which issue number one, dated October-November, appeared in 1952 (it started as a comic book and became a magazine).

During the baby boomer generation, the magazine became the epitome of “cool” and irreverence, which remained its trademark from the very first issue in which Mickey Mouse became Mickey Rodent and Superman, Superduperman. “We have influenced or entertained a great many people who are now grown and introduced it to their children. It’s mostly nostalgia now,” legendary Mad cartoonist Al Jaffee said in 2019.

But why all the praise for a magazine that has been relegated to old-age homes and why do early issues fetch big bucks from collectors? For decades there were cool kids and kids who read Mad. The former had as crutch Star Trek and Tolkien’s culture but the latter had as company the magazine’s gap-toothed mascot Alfred E. Neuman who introduced readers to a world of parodies and cartoons of people who thought it was natural to chomp and break wind in public.

Sure, the jokes only hit teenagers like the liberating sounds of The Beatles or The Rolling Stones but every line always served the purpose of ensuring readers don’t forget reality, something that was far removed from the usual collection children were given. Not just presidents, actors and businessmen who were targets of the cartoonists and writers at Mad, even the world of advertising was taken to task. Nobody was spared — “Winsom (a dig at Winston) tasted good as a cigarette should’ve,” read the speech bubble arising from a tombstone in a spoof of a 1960s Winston campaign.

That the world was full of hypocrisy and folly was not lost on the people who brought out the magazine for decades. Harvey Kurtzman created the magazine when McCarthyism was still going strong, turning out jokes that verged on being childish, making it a potent tool among the youth. The readers learned early to distrust authority — politicians, advertisers or business barons. In the process, it inspired a generation of underground comics, National Lampoon, Saturday Night Live, The Simpsons and... American comedian Stephen Colbert.

The folks at Mad even dared to piss off composer Irving Berlin, who couldn’t accept the joke that the magazine had turned his song A Pretty Girl Is Like a Melody into the rant Louella Schwartz Describes Her Malady. He and other music corporations sued the magazine’s publisher, E.C. Publications, Inc with the case, making it to the US Court of Appeals for the Second Circuit. The judges ruled in Mad’s favour, setting a precedent when it comes to song parody.

For kids, it always felt like a comic book which came in the form of a magazine but the written word was the stuff adults heard on news programmes. The “usual gang of idiots”, as Mad called themselves, was always full of spit and vinegar. When the Vietnam War was raging, the magazine published its take on the war in April 1969, parodying the most recognisable advertisements for the United States Army: Alfred E. Neuman took the place of Uncle Sam, switching “I want you” with “Who needs you.” It didn’t spare Steven Spielberg’s movie Jaws, which still mirrors the definition of a Hollywood “blockbuster”. The killer shark in the film became the shark who thought twice before eating up Alfred E. Neuman. Barack Obama also had his share. Obama in the likeness of Alfred appeared on the cover brandishing a banner that read: “Yes, we can’t”, a take on Obama’s campaign phrase, “Yes we can.”

Of course, the stories will fall apart if we take Alfred E. Neuman away, who first graced the satirical magazine’s cover in December 1956 and then become synonymous with it. His appearance was probably inspired by an illustrated postcard spotted by Mad’s founder Kurtzman in the early 1950s. The postcard featured an early version of his famous face, captioned “Me Worry?” But Neuman’s iconic image can be traced to an 1894 ad in the Los Angeles Herald for a play called The New Boy. According to Smithsonian, Neuman’s progenitor was a 30-something character named Archibald Rennick, who tries to pass as a schoolboy in the play. Neuman’s grinning mug was most likely originally based on one of the actors who played Rennick.

As the world becomes more compartmentalised with “if you are not with me, you are against me” logic having a rule of the era we live in, the importance of Mad should not be forgotten. It has left a gaping void, robbing youngsters of a “school” where the only aim was to look at the world with a few pinches of salt. It’s up to Stephen Colbert and the likes to continue what Alfred E. Neuman has always been telling the world: “What, me worry?”