Rabindranath Tagore, a poem that defined the Buddha, and Sujata Stupa

A new biography of Sir Edwin Arnold’s 1879 epic traces its influence on a host of luminaries like Vivekananda, Gandhi, Nehru and Ambedkar, and Nobel laureates Kipling, Eliot and Yeats 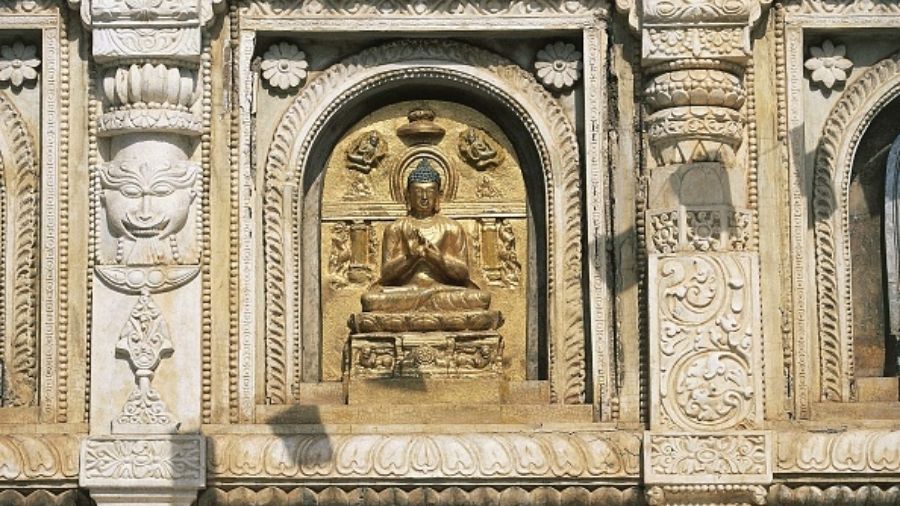 Sir Edwin Arnold’s epic poem, The Light of Asia, written in blank verse, was first published in London in July 1879. On its release, The Light of Asia: The Poem that Defined the Buddha, it immediately took England by storm, and soon thereafter America and Europe too were stirred by it. The poem captivated a host of the subcontinent’s luminaries too including Swami Vivekananda, Anagarika Dharmapala, Mahatma Gandhi, Jawaharlal Nehru, and B.R. Ambedkar, the prime architect of the Indian Constitution. It influenced at least eleven literary personalities from across the world, five of them Nobel Laureates: Rudyard Kipling, Rabindranath Tagore, W.B. Yeats, Ivan Bunin and T.S. Eliot.

In late-February 1912, a play called Buddha was staged at the Royal Court Theatre in London. This was produced by William Poel, the noted theatre figure best known for his presentations of Shakespeare. The play was adapted for stage by S.C. Bose. It has been speculated that he was Sarat Chandra Bose, the elder brother of Subhas Chandra Bose, and later to become a prominent figure in the Indian freedom movement himself. Sarat Chandra Bose was indeed in London at that time studying law. The evidence, however, is not conclusive. Buddha was a significant success. The driving force behind it was Kedar Nath Das Gupta, who had come to London in 1907 fleeing possible police action against him in Calcutta for having been a revolutionary there. In 1912, Das Gupta would also set up the Indian Art and Dramatic Society, which organized an evening dedicated to the works of Rabindranath Tagore in his presence at the Royal Albert Hall. Tagore would win the 1913 Nobel Prize in Literature for his collection of songs called Gitanjali.

Tagore, the poet of Indian nationalism, was India’s pre-eminent cultural and literary personality of the twentieth century. The influence of the Buddha on his poetry and his novels has been much studied and written about. This influence came about in diverse ways. His immediate family was steeped in Buddhist study. In 1859 his father Debendranath Tagore had been to Ceylon and had come back with not just knowledge of but keen interest in the Buddha’s life and his teachings. He wrote Sakya Muni O Nirvan Tattvai in 1882. Satyendranath Tagore, Rabindranath’s elder brother, who had accompanied their father to Ceylon, wrote Bauddha Dharma in 1901. The Brahmo Samaj, of which the Tagore family was an integral part, had also taken up the study of the Buddha’s teachings.

In January 1922, Rabindranath Tagore would visit Bodh Gaya and issue this statement: I am sure it will be admitted by all Hindus who are true to their own ideals, that it is an intolerable wrong to allow the temple raised on the spot where Lord Buddha attained his enlightenment to remain under the control of a rival sect which can neither have the intimate knowledge of or sympathy for the Buddhist religion and its rites of worship. I consider it to be a sacred duty for all individuals believing in freedom and justice this great historical site to the community of people who still reverently carry on that particular current of history in their own living faith.

Rabindranath Tagore had taken The Light of Asia with him when he went to Bodh Gaya. While the imprint of the Buddha is very distinctive in many of his works, the influence of The Light of Asia specifically has been traced in the poem ‘Bidaye’ of Kalpana Kavyagrantha. It has apparently never been translated into English before and is being done so for the first time here:

In your blissful sleep,

You shudder in dreams of separation.

At dawn your vacant eyes,

Will search and brim with glistening tears.

Though Your ruby lips and sad eyes are yet to utter,

So many words of endearment.

The bird will fly across the seas

Leaving the happy nest behind.

From across the firmament I hear the call.

Nobel laureate C.V. Raman in conversation with Jawaharlal Nehru sometime in the early 1950s. Both men were profoundly influenced by The Light of Asia, with Raman acknowledging that it is one of the three books that had shaped him.
Source Raman Research Institute.

Tagore’s stance on the Mahabodhi Temple at Buddha Gaya was completely different to the one his Japanese friend and admirer Okakura Kakuzo had taken years earlier. Okakura Kakuzo was an artist who had in 1895 ‘issued a call for a painting competition to represent scenes from the life of the Buddha in a new form’. There was an enthusiastic response and a number of works resulted, but these were ‘dogged by critics’ accusations of inauthenticity’. Okakura must have decided that he had to visit India to get a better sense of ‘historical authenticity’ to depict the life of the Buddha. In addition, he had been persuaded by a wealthy American woman, Josephine MacLeod, to join her on her journey to Calcutta to meet Swami Vivekananda. MacLeod had been Vivekananda’s ardent admirer and benefactor since 1894. Okakura was planning to host another Chicago-like World Parliament of Religions in Japan and hence his visit to the man who had been the most charismatic presence at Chicago in 1893 was most welcome.

Okakura Kakuzo reached Calcutta in early January 1902 and struck an instant rapport with Vivekananda and invited him to Japan. The two were in Buddha Gaya together sometime in the last week of January 1902. Vivekananda had been there sixteen years earlier. On 7 February 1902 Vivekananda told Josephine MacLeod: We [Okakura and he] have safely reached Benaras . . . I am rather better here than at Buddha Gaya. There was no hitch to our friend [Okakura] being admitted to the chief temple and [allowed to] touch the Sign of Shiva and to worship. The Buddhists, it seems are always admitted…

A few weeks later Okakura made a second trip to Buddha Gaya with another Japanese Buddhist priest Tokuno Oda, who had come to Calcutta in April 1901 as Okakura’s emissary to Vivekananda. The two Japanese went to meet the Mahant to negotiate the purchase of land close to the Mahabodhi Temple. On his return to Calcutta, Okakura wrote to the Mahant on 26 April 1902 expressing his desire to ‘erect a rest house [close to the Mahabodhi Temple] for followers of Mahayana Buddhism in Japan’ and his willingness to purchase land at a ‘fair and reasonable price’ for this purpose. He had distanced himself from the ‘representatives of the Hinayana Buddhism of Ceylon, Siam or other places,’ who had been agitating for total Buddhist control over the Mahabodhi Temple. Okakura gave his Calcutta address as ‘c/o Swami Vivekananda, the Math, Belur, Howrah’. Obviously, Vivekananda would have been in the know about Okakura’s proposal, which, as it turned out, was acceptable to the Mahant as well. A few months later, on 4 July 1902, Vivekananda passed away. It is clear that Okakura was deeply influenced by Vivekananda in his views on Buddhism and its relationship with Hinduism which were at variance with Dharmapala’s. Later Okakura would become an important part of Tagore’s orbit for a while.

As for Sister Nivedita, born Margaret Noble, she would visit Bodh Gaya in early October 1904. Her entourage had included twenty men and women, among whom were the scientist Jagdish Chandra Bose and his wife, Rabindranath Tagore and his son, and the historian Jadunath Sarkar. She would write to MacLeod on 15 October 1904 from Rajgir: We have been a party of 20 spending 4 days at Bodh-Gaya . . . and I think it has been an event in all our lives . . . In the mornings we had tea by 6 and then readings—Light of Asia—Web of Indian Life [Nivedita’s own book] etc, and talks. All gathered together in the great verandeh. Our Mahant is like a King. Evenings—we went out after tea—to the Temple and Tree…

Rabindranath Tagore was not the only member of the distinguished Tagore family on whom The Light of Asia would have a marked influence. His nephew Abanindranath Tagore, the first Indian artist to gain international recognition just as his uncle was earning a global name for himself, had painted Buddha and Sujata in 1902.

Today, about a twenty-minute walk east from the Mahabodhi Temple in Bodh Gaya stands Sujata Stupa or Sujata Ghar that honours this milkmaid who ended the seven years of self-mortification of Siddhartha Gautama paving the way for his enlightenment.

The Light of Asia: The Poem that Defined the Buddha