In a strange and mysterious way, Pramod Kapoor's book prompts you to think about that imagined future 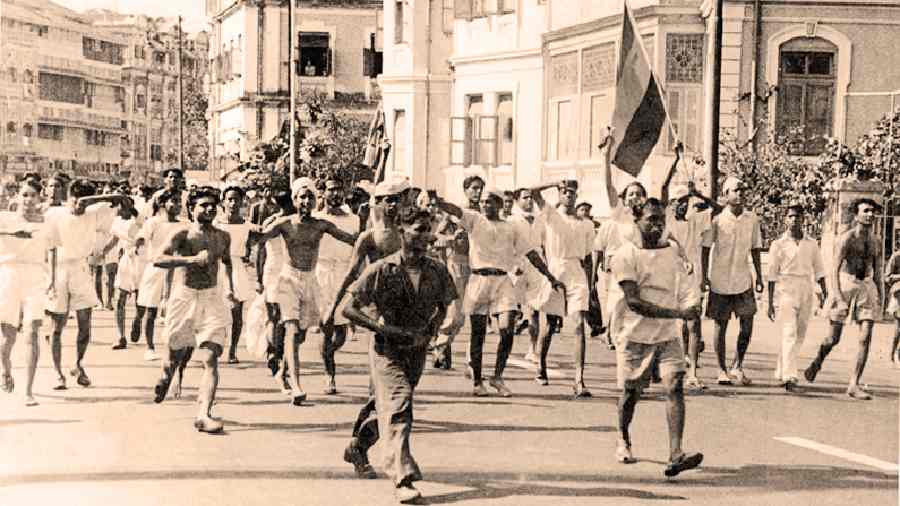 Pramod Kapoor’s book begins by revisiting Calcutta in March 1965 — when Utpal Dutt staged his play, Kallol, at the Minerva Theatre, dramatising with flourish and alarum the Naval Mutiny of 1946. Dutt’s play historically coincided with the release of The Sound of Music in New York, Harold Pinter’s The Homecoming in London, and the commencement of Operation Rolling Thunder in Vietnam. Kallol  (literally the ‘deep rolling sound of the waves’; “commotion” or “hubbub” in Kapoor’s translation) marked a turning point in Indian theatre: despite government opposition, media blackout, mob attacks and bombings, the play was a roaring success. Strange lights set up by Tapas Sen illuminated the rebel ship, Khyber, floating on the stage; theatre-going crowds in unison with the actors voiced songs of Salil Chowdhury and Hemanga Biswas remembering the mutineers; street-side posters advertising Kallol ensured that the expression, “cholchhe, cholbe” (“Whatever is happening will carry on happening”), would forever become part of the Bengali politico-cultural lexicon.

Half a century later, Kapoor relives the excitement surrounding Kallol on the streets of Calcutta to ask a single question: why is that, “(i)nstead of being enshrined in public memory alongside the Salt March, Jallianwala Bagh, etc., the naval mutiny of 1946 tends to be relegated to just a footnote, except in scholarly works written by historians, for the benefit of other historians?” This book is an attempt to dig out uncomfortable answers as Kapoor reconstructs the events of the Naval Mutiny for a non-specialist readership. His primary sources are forgotten historical records, newspaper reports, reminiscences of the mutineers, and long interviews with their kin.

On February 1946, the mutiny began on the signal ship, Talwar, in Bombay and in less than 48 hours, it completely paralysed the Royal Indian Navy, one of the strongest navies surviving the Second World War. Around 20,000 RIN “ratings” (sailors) from 78 ships and 21 shore establishments stood in solidarity with the strikers of Talwar.  When threatened with violence, they broke open armouries, dismissed their officers, and took command of all naval ships in the ports of Bombay, Calcutta, Karachi, Vizag, and Madras. Civilians across India supported their strike, while Indian soldiers of the army refused to fire on them. The imperial order in India was tottering. Confidential reports warned of an impending rebellion greater than the 1857 War; unlike 1857, British rule in India now faced the danger of an uprising led by battle-hardened Indian veterans of the Second World War serving on the seas, land, and in air. According to Kapoor, the momentous impact of the 1946 Mutiny is not hard to discern: “Barely 24 hours into the mutiny, the British hustled to announce a Cabinet Mission which was to travel to India and discuss the transfer of power with Indian stakeholders. This was announced by Prime Minister Attlee in the British Parliament on the very day he received news of the naval mutiny.”

1946  offers a riveting, day-byday account of the Mutiny and, after the declaration of the general strike, an hour-by-hour recreation of the events leading to the surrender on February 23 — a surrender occasioned by the peremptory orders of politicians like Vallabhbhai Patel and M.A. Jinnah on whom the ratings had misplaced their trust. This fast-paced recounting is complemented with a longer view of history that takes into consideration the maritime histories of the Indian Ocean after the advent of the Portuguese in the late-fifteenth century, the naval battles between the Portuguese and the Marrakars, the exploits of the Maratha navy under Tukoji Angre, and the occupation of Surat and, later, of Bombay by the British East India Company. A touching epilogue offers insights into the forgotten afterlives of mutineers like B.C. Dutt, M.S. Khan, R.D. Puri, Kusum and P.N. Nair, political activists like Aruna Asaf Ali, and explores the fate of the individual ships.

If the immediate triggers for the mutineers were miserable working conditions and racism, Kapoor insists that their primary inspiration came from the show-trials of the Azad Hind prisoners. The November 1945 trial of P.K. Sahgal, Shahnawaz Khan, and Gurbaksh Singh Dhillon — incidentally, a Hindu, a Muslim, and a Sikh put on open trial by the British at the Red Fort — was an act of imperial folly and arrogance that united Indians across communal divides. The mutineers, too, were not immune to the dreamsongs of “Azad Hindis”: they risked execution as they declared themselves “Azad Hindis”, chanted patriotic slogans, and pulled down the flags of the RIN, replacing them with three entwined flags on every ship — a tricolour representing the Congress, a green representing the Muslim League, and a red flag representing the communists — a vision of an inclusive, imagined future that sat uncomfortably with most established Indian political leaders of that era. In a strange and mysterious way, this book prompts you to think about that imagined future.