This is Chapter 33 of The Romantics of College Street, a serial novel 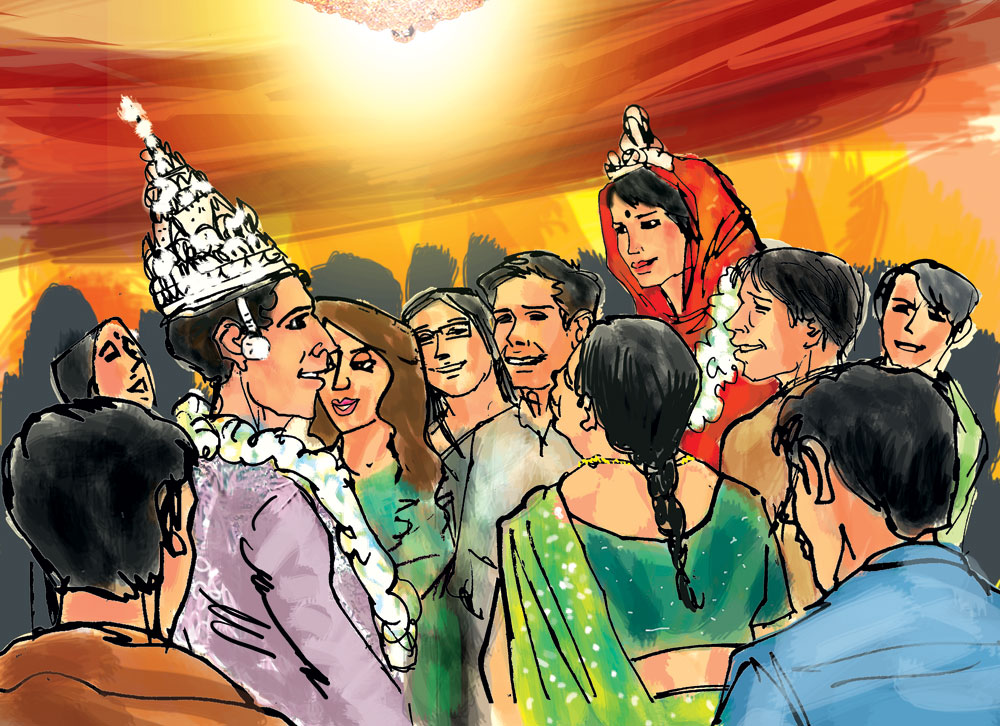 The bride had been hoisted high up by the four piri-lifters, higher than the groom’s shoulders and dangerously close to the chandeliers. Wait, Tilo narrowed her eyes. Was that Ronny Banerjee, sweating profusely as he balanced the piri?
Illustration by Suman Choudhury
Devapriya Roy   |   Published 19.01.19, 02:28 PM

Tilottama Chaudhuri looked askance at her husband as he threw back his head and laughed. For a moment, the double chin that he had managed to acquire, despite her constant vigilance, disappeared. Her bitterness abated briefly.

Vik laughed again. Tilo looked away from the crowds — where she’d been looking for signs of Lata Ghosh — and returned to the proceedings.

The bride had been hoisted high up by the four piri-lifters, higher than the groom’s shoulders and dangerously close to the chandeliers. Wait, Tilo narrowed her eyes. Was that Ronny Banerjee, sweating profusely as he balanced the piri? So he had no time to write out her keynote address and his assistant had taken weeks — weeks! — to revert on travel details but apparently he could gallivant about random weddings. Tilo pursed her lips in annoyance. This was why Bengalis were always languishing. No professionalism. Also, could he be that famous if he was still lifting piris at weddings?

Tilo liked to maintain a roster in her head where everyone in her circle was assigned a place (after a detailed assessment of their overall assets, which not only included obvious things like net worth and location of property, but also things as diverse as where they’d grown up and how many followers they had on social media). The roster was closely monitored and updated. Any hint of a miscalculation — and Tilo’s mood curdled rapidly.

Thanks to Calcutta traffic, they had only just got in. Since the shubho drishti was under way, they’d made their way straight to the action instead of looking for Lata. And even though Vik had been grumpy the whole time in the car, worrying about Josh (unnecessarily) and complaining about having to attend the wedding at all, it now seemed the infectious nature of events had rubbed off on him. Paradoxically, Tilo, whose idea it had been to come to the wedding, to dress up, meet people in their circle as well new ones, rekindle some of that youthful sparkle inside, now felt an inexplicable sourness. Vik smiled at her. The bride and groom were righted.

A small cheer erupted from the friends and relatives gathered around the makeshift chhadna tala. But all said, Tilo told herself, at least they still looked good together. And here, at the Oberoi, among the Kanjeevarams, Benarasis and Chanderis, and the shockingly old-fashioned suits or sherwanis worn by most of the men, Tilo thought they looked quite distinguished in her simple blue tussore, paired with her real pearls, and Vik’s navy suit and pocket square. They were certainly in the top one per cent here. That thought calmed her down a little. And raising herself on tiptoe — one of the reasons Tilo felt the need to assert herself everywhere was her diminutive stature — she finally managed to catch a glimpse of Lata Ghosh. There she was, standing next to Aaduri Bagchi, right behind Molly, throwing flowers at the couple.

Lata looked radiant. She was in a tea-green Benarasi that was heart-stoppingly beautiful. It was a rare sari, Tilo would have to ask her where she’d bought it. Who knows? Maybe Lata Ghosh was one of those people who kept her recipes and sari sources close to her chest. Though she was only two years younger than Tilo, there was something strangely ageless about her. Tilo decided that she did not really like Lata. She turned her gaze to Aaduri. The ivory pallu of her black sari thrown casually around her shoulder, Aaduri leaned in and whispered something to Lata. Lata rolled her eyes. Cameras flashed. The bride and groom, having posed for pictures, now went off to the mandap, where further (abbreviated) rituals awaited.

“Arre Vikramjitda, Tilottamadi! How lovely to see you both,” Ronny was warm and effusive in his kurta and jeans. He wiped his brow with a handkerchief. “Pragya, meet two of my most favourite seniors from college, Tilodi broke academic records, Vikda was a rock star. Debate, quizzing, you name it. They are both professors now.”

Pragya Paramita Sen smiled at them. She looked as young as their students and thin as a pin. Attractive face. And those vintage emerald drops on her ears were definitely authentic vintage. The doubts that might have assailed Tilo briefly about Ronny’s place in her roster vapourised. Vik, however, immediately committed a major social faux pas and began to gush how like her mother Pragya looked, how he was an ardent fan of Shaarani Sen, how the cinema club on campus would soon be screening a retrospective of her best films. Tilo would have to remind him to not embarrass her this way.

“And this is Goopyda, Lata’s cousin. He is a professor at Barnard.”

Tilo raised her eyebrows. She approved of Barnard, Barnard was very posh, see, this is why they’d come all the way from Jamshedpur. She smiled at Goopy and gently adjusted the Basra pearls in her ears. She now turned expectantly towards the African panting next to him. Ronny continued the introductions. “And this is Duma. I just found out that he is part of this small start-up.”

Duma waved away his words and complimented Tilo’s sari.

“Oh. My. God.” said Tilo. “I teach a case study on Epic. How it became the most exciting OTT platform ever after failing at DVD rentals. Now — Duma, is it? — can I badger you for a bit?”

“Hello! So glad you could make it,” Lata had finally found the group. “Vik, Tilo, this is Hem. Aaduri’s colleague, Molly’s favourite...”

“Hello Hem,” said Tilo, shaking his hand, even though her eyes were still peeled on Duma, “You are joining us in Jamshedpur, right?”

“Ah, yes, of course. Thanks for including me in the invitation.”

Aaduri appeared next to Hem, gave Tilo and Vik a hug each and then announced, “I think we should commandeer one of those tables. We are really in the way here.”

Tilo latched onto Duma’s elbow and led the way. She knew exactly which table she wanted. As expected, the group fell in line behind her.

Lata hung back and decided to look for Prasad and direct him to Tilo’s table. She should probably go and check on the Sens and the Haldars who she hadn’t spoken to all evening. But then, feeling tired of it all, she changed direction mid-course, and slipped into the ante-chamber where Molly had waited before subho drishti. It was now deserted. The scent of crushed flowers emanated from the single sofa in the corner. Lata stretched her legs and looked at her phone.

Oh, she had an email!

What do you get when you cross a tortoise and a porcupine?

TBH, Josh told me this joke. I have been spending far too much time with him because his parents are in Calcutta and he is going to live with us for two whole days. His jokes are the only good thing about him. Otherwise, he is quite annoying. He flip-flops around the house in his ugly yellow Crocs which is SO unfair because I can’t wear my favourite sandals at home. He gets special treatment because he’s a ‘guest’. (I was calling him ‘ghost’. Mama scolded me.)

I wish I could trade Josh for his birds, they are alone in his house with their Didi, and maybe they are lonely. Do you remember their names? Optimus Prime and Max. I bet THEY don’t talk about Harry Potter CONSTANTLY. Josh is always quoting Harry and calling me Hermione because he thinks I am a nerd. He means it as an insult but I think it’s a compliment because Hermione’s my favourite and she is the smartest.

Since you were so curious, I am attaching a picture of Scone. (Curling up with Scone is making the situation better.) I’m reading Al Capone Does My Shirts by Gennifer Choldenko to her. But I can only do it out loud when nobody’s around. If Josh hears, he’ll make fun of me. If my parents hear, they may confiscate the book. Scone keeps secrets well. I know you will love her because she is VERY sweet, even to the so-called guest/ghost. She never barks or growls like I do. I guess I’m more like a cat than a dog.

“If you’re stealing away at a wedding to check your messages, then it can mean only one thing,” Ronny remarked.

Lata looked up and made a face at him. He was leaning against the doorway and promptly took this as an invitation to come sit next to her. “New friend?”

“My new friend,” said Lata, lightly brushing off a flower from Ronny’s shoulder, “I’ll have you know, is even younger than your new friend.”

Recap: As Lata goes about keeping everything going as it should at the Oberoi — even making sure that the aunt from Nabadwip and her family is taken good care of — there’s a minor crisis as the designated piri-lifters take their time to arrive at the venue.