Advertisement
Home / Culture / Books / My personal creed is that I don’t lie. Ever: Aatish Taseer

My personal creed is that I don’t lie. Ever: Aatish Taseer

Aatish's latest The Twice-Born: Life and Death on the Ganges is on bookshelves now 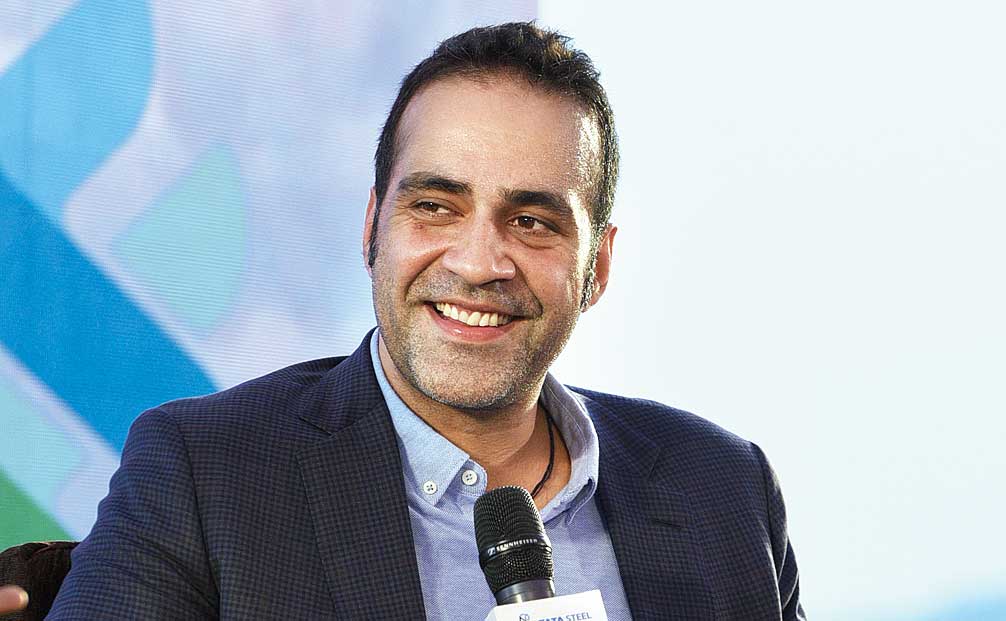 Aatish Taseer was in conversation about his latest book, The Twice-Born: Life and Death on the Ganges as a part of the Tata Steel Kolkata Literary Meet, in association with The Telegraph
Image: Rashbehari Das
Anannya Sarkar   |   Published 04.02.19, 03:32 PM

Right from his first book in 2009, New York-based author and journalist Aatish Taseer has been the toast of literary circles for his prose style, as much as he has been the subject of abuse for his content, from a portion of readers. But Aatish, 38, is not one to shy away from plain-speak, with his latest offering The Twice-Born: Life and Death on the Ganges, already on bookshelves.

Excerpts from a chat with Aatish on the sidelines of the Tata Steel Kolkata Literary Meet, in association with The Telegraph:

They say each book is a substantial part of a writer’s life. In that context, how has the journey been from Stranger to History: A Son’s Journey Through Islamic Lands (2009) to your latest, The Twice-Born: Life and Death on the Ganges (2019)?

In a funny way, they almost seem bookends to what I have done so far. You have the first book, which is exploring the Muslim side of my identity that was unfamiliar to me and that I myself had to travel across to understand, firstly in the Muslim world and then to Pakistan and then to this man, who was my father and all three were unknown to me. So that was kind of a lateral journey. And then you had these three works of fiction culminating into the way things were into this big novel. And then you have this other journey, which I think bookends my time in the subcontinent or writing about the subcontinent. It’s a very different kind of journey because everything is known — this is the Sikh-Hindu side of my identity and I grew up around it. Benares was somewhere just along the road and it did not require a long journey and yet there were these great distances that occurred within these short physical distances and it required a kind of journey, that, in a paradoxical way, required a kind of stasis instead of movement — it was sort of a vertical journey. It was a journey where people that had been around you all the time revealed themselves and one became aware of the distances that you stood at to your own place. It’s very, very different in shape.

What triggered the making of The Twice-Born: Life and Death on the Ganges?

The kind of incuriosity that comes from a certain kind of upbringing in India and it came upon me in a sort of surprising way because I stumbled upon a group of Brahmins discussing ‘Stotra’ and I thought, ‘How insane! I am like a curious, intellectual, thoughtful person... that it would be so obvious that this would be of interest to me.’ This was just a branch of this whole body of knowledge that was fascinating and the fact that nobody said that to me, it made it seem like the world had almost conspired to keep me away from it and treated them in a way that I would not think of them as something of interest to me. I feel strongly about things that have happened to me without me knowing about them.

My job is not to fill in the gaps, my job is to simply show the outline of that kind of absence and to make people aware of a shape of thought, rather than to offer solutions or anything like that. I think what happened was that I was curious, I was interested in these things and I thought I am going to go to Benares, speak to some Brahmins and try to get a sense of what there is.

Despite being in trouble with almost all your books, you still seem to be able to write with almost clinical clarity and detachment from your life. It’s not something writers are great at doing because they tend to get personal with their writing…

I think people could say it’s a talent or whatever but my own personal creed is that I don’t lie. Ever. And in writing, especially. I don’t almost think I am capable of it. And so that stepping back that you’re referring to is something that just happens in that moment when you’re alone and working and then I can’t really tell it different from how I really know it to be. Because the actual process is that of going deeper and in that place, everything is known and it’s not a world governed by malice. And at that stage of writing to be like vindictive or vulgar is not something one does. And in that moment, it kind of reveals itself. So I guess what I am saying is that it happens in a kind of an organic way.

You have also been writing fiction and non-fiction with equal gusto for a while now. How do you decide between the tags when writing something?

By a very simple test. Sometimes you have an interest for which you carry all the material and you just have to close the door and it just has to work its way out of you. And then sometimes, you have a question which you need to go out in the world and seek its answer. And when you must go out in the world to answer that question, for me, it almost necessarily becomes a game of non-fiction.

The books are not so different, they all have a similar quality and that’s what makes non-fiction easier as well because when you’re endowed, you can keep going back into the world and keep satisfying your question for fruition. With fiction, it’s much more ephemeral. If you have that feeling and, let’s say, you f*** around a little bit, go off on a holiday and that area of concentration and pressure disappears. You have lost it and there’s nothing anyone can do for you and you no longer can fall back on you.

You have started out very young and from the beginning you have received a lot of praise from a lot of quarters. So what’s been the most interesting reaction?

I have written about it a little bit in a piece I did on V.S. Naipaul after his death and that was definitely the most interesting reaction I have received about my work — when he read and disliked my first novel and tore me to pieces for about an hour on the telephone. Like literally! If you were left standing after that kind of an attack, it was already like an accomplishment. And at the end of it, I said to him, ‘I guess I should pack it in then and there’s no point. I mean, do you believe that I could write fiction at all?’ And he’s like: ‘Yes, of course I do! We wouldn’t be having this conversation if I wasn’t.’ And it was after being punched so hard there was suddenly this little reprieve. So that was a very nice moment, but in this business of public life of any kind, you have to keep thickening your skin because you can’t let it stop you. But at the same time, be receptive.

As a writer today, do you think one should weigh their words carefully, especially on social media?

I think words have a certain weight for writers and if you hear writers voice too much on Twitter or whatever, it is probably a bad thing. But what I like to do is write in different registers. So the book, both in its quality of prose and judgement, is in a different vein than what I consider journalistic writing, which will become tomorrow’s fish ’n’ chips wrapper because it’s throwaway. It’s not meant to be valued. It’s meant to pack a punch and you only have a 1,000 words and you have to say one thing and say it convincingly.

One hopes that when you have to say it together, people will be able to separate that political writing from the books and be able to see that one thing is of a different quality and importance from that other writing, which I think the South Asian writers, like the South American writers like (Gabriel Garcia) Marquez, must do. I feel like maybe it’s okay for the English or the American writers to be very rarified and to live in a perfumed world but for us, I think we have to be much more engaged and we have to have those different voices. I think Manu Joseph has that voice and I aspire to it too.

Since you mentioned Manu Joseph and yourself, is it possible for a writer who does not have journalistic practice to do the same?

I think a writer can both write well and can deal in oblique ways with things that commentators and journalists deal with in very obvious ways. A writer can be sly, suggestive, playful and a lot of my pieces try to find the cultural fault lines behind more obvious political expression. I think the writer has a very privileged position in that he can bring out that other side of things.

Coming to Twice-Born again, you wrote about Benares, which is pretty much done to death in the Indian context of things. Was that a concern?

Absolutely. But I don’t think it’s been done the way I have done it. It has been done in the Diana Eck type of way or the Jeff in Venice (Death in Varanasi by Geoff Dyer) kind of vein of writing. It’s been done, sometimes, in a very Indian romantic way like ‘Oh, the smells, sounds and sights’ you know.

This is not a romantic book, this is not Benares in that way. I am re-purposing a cliche to deal with a look or an experience of Benares that I don’t think has been written about or even known. I don’t think in India or abroad, it’s acknowledged how strange our relationship — I would go so far as to say even perhaps your relationship — is to the continuities and the survival of Indian traditions. Our discomfort, embarrassment, uncertainty about our past — what does one do with it? I wouldn’t have written this book if there was another one like it.

You have commented on your own writing saying that you don’t feel the need for it to perform anymore...

I think when you’re young and have the talent, you want to be lyrical (and part of it came to me naturally) and I enjoyed that effect. I think an internal change also occurs (as you grow older) — one becomes a little quieter and you don’t need fireworks in the same way that you do when you’re starting out.

So is writing cathartic for you?

No, not cathartic because catharsis, by definition, is a passive experience. The Greek audience was achieving catharsis while the actors were doing the work, who were not feeling cathartic. And I am like the people on the stage, doing the hard work. So if I wanted catharsis, I would find simpler ways. What does happen is that something that’s been working away at one — an interest, a passion — can suddenly go cold after you have written about it. And then you realise with a heavy heart that you don’t really give a f***. It’s worked its way out of my system and I am thinking about something else.