After capitalism, what? Giacomo Corneo tackles the beast

Global capitalism has run out of steam. A professor of Public Finance and Social Policy has two tests for alternatives 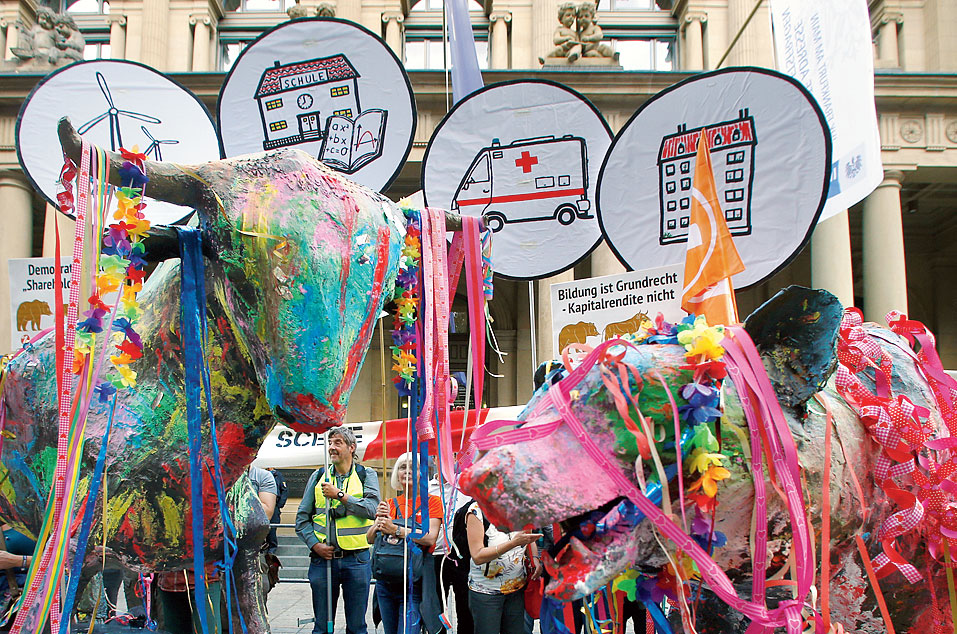 It’s fairly obvious to almost everyone now that global capitalism as a system has run out of steam, that it has created unequal societies with unjust outcomes that are increasingly also seen as unacceptable by people across the world, and that it is simply unable to deliver on the aspirations that are created by its votaries. What is wrong with capitalism is now quite well-known, so the question becomes: what economic system would work better, and how can this be brought about?

Giacomo Corneo attempts to answer this question by posing it in terms of two tests that an alternative system must meet. He argues that, to be economically feasible, an alternative system must pass a cooperation test and an allocation test. First, can it provide sufficient economic cooperation among members of the polity? Second, is it capable of bringing about a comparatively efficient allocation of resources? In essence, he suggests that to be preferable to capitalism, an alternative system “must be able to motivate individuals to act in economically meaningful ways and it must ensure that the use of available resources is temporally and spatially efficient.”

Many questions are begged here: what is “economically meaningful”, what is “efficient”, and so on. By seeing these in terms of his basic premises that values (which are economically meaningful) are determined through exchange, and that economics is about the allocation of scarce resources, Corneo effectively traps the assessment of all economic systems in his own epistemological premises, creating ground rules that already tip the game in capitalism’s favour.

In a way, Corneo reveals his hand right at the start — or at least, he makes clear his own preferences: “it is important to ask whether the deficiencies for which capitalism is blamed by its critics could not simply be overcome by radically changing the way in which the activities of the state are organized — that is, without touching the core elements of the capitalist economic system (namely, markets and private property). If that were possible, the whole discussion of what to put in capitalism’s place would become superfluous and we could save ourselves the round-trip through alternative economic systems” (emphasis added).

This is quite revealing, because it explains the subsequent manner in which other alternative systems are discussed and assessed. Corneo’s style is clear and engaging, and he certainly provides neat summaries of what are really much more complex and nuanced philosophical positions and political economy approaches. Beginning with a consideration of Plato’s Republic (which he rejects for its lack of democracy) he turns to Thomas More’s Utopia, with its system of common ownership. He notes that this solves the cooperation problem through a system of control by peers that makes use of the local embeddedness of people’s lives, but feels that it would still be “inefficient” because the lack of a labour market would mean that relatively unattractive jobs would simply not get performed. Similarly, he rejects Kropotkin’s anarchy (that would do away with the State and its regulatory functions) as being inefficient.

So what about a centrally planned system, in which citizens transfer the rights of their shared ownership of the means of production to the State, which then uses these in the interests of the citizens and ensures a just distribution of output? After dwelling on information problems in centrally planned economies, Corneo highlights other problems: the possibility that the necessary cooperation between individuals (as producers, employers, workers, consumers) may not occur; and the lack of incentives in the system for innovation and product differentiation.

But even if retaining the market is essential, it is possible to combine the market with non-capitalist institutions, such as workers’ self-management or cooperatives, or public ownership of firms with appropriate controls. But Corneo doesn’t think this would work either: there can be “unfair” income distribution because of differences in productivity across firms, leading to inequality and insecurity; “misdirected structural transformations” and misguided investment decisions could generate instability and unemployment.

Market socialism — a market economy without capitalists, in which the State owns all the means of production — gets a slightly better review. But here the problem is identified as the lack of a stock market, which Corneo believes is a central signalling and disciplining device. Indeed, his deep and somewhat surprising faith in the stock market permeates the rest of the book, which deals with shareholder socialism, a system based on a universal basic income and finally a combination of regulations on firms and a welfare State. There are several variants of shareholder socialism, and it is not clear why Corneo rejects them (and, as the Epilogue makes clear, in fact he doesn’t really reject them).

But he ultimately plumps for the market economy with private ownership, stock markets, along with regulations, more taxation and welfare provision by the State. In other words, a cleaned-up, less extreme (and less neo-liberal) version of what we have already. The initial premise turns out to be the conclusion: just get rid of the more offensive and unequal aspects of capitalism, and tone it down a bit, and we’re good to go.

This is not really as much of a failure of the imagination as I may have made it appear, because Corneo does indeed try to take other systems seriously, albeit within his own constraints. But the argument suffers from some major flaws. First, the over-optimistic view of the stock market (based entirely on theoretical principles rather than practical experience) distorts the analysis and limits the acceptance of wider possibilities. Second, and perhaps much more significant, Corneo betrays no awareness of capitalism as a global system, its predatory relationship with non-capitalist economic entities, and the associated patterns of uneven development and unequal relations among countries, which determine the “success” or “failure” of what he sees as only nationally specific economic systems.

Finally, Corneo is fundamentally caught within his own paradigm, seeing the complex interplay between the material world and social relations only through the limiting prism of resource allocation and efficiency. So this book is an interesting foray into this question, but ultimately does not provide a completely convincing answer.