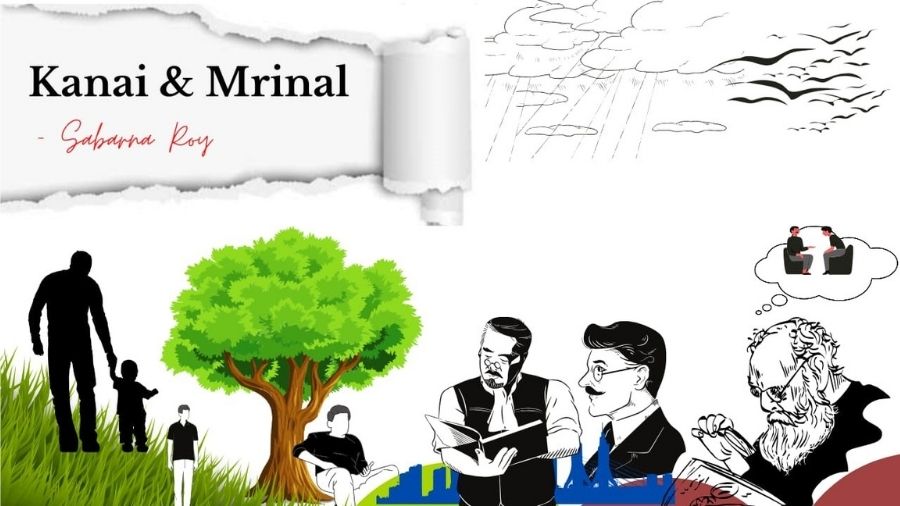 A delightfully grim composition from the pen of the critically acclaimed, much awarded, bestselling author Sabarna Roy. A must-read

1. The distance between Kanai and his son defines Kanai’s life. Kanai’s son, Mrinal, lives in London and works there as a Geotechnical Engineer in a Technology Start-up having Mastered from Imperial College of Science and Technology, London in 2018 with flying colors. He plans to pursue his PhD from Cambridge once he obtains his British Citizenship in 2024 and thereafter, build a career as a Consulting Geotechnical Engineer in one of the top-most UK Geotechnical Consulting Companies. He plans to buy a house in London and a car sometime in the near future. Marriage is not on his priority list. It may happen; it may not happen; presently, he is not in any relationship.

Kanai lives in Kolkata and the acute isolation caused during the Covid 19 Pandemic has taken a toll on his mental health, although he makes every attempt to hide it.

He now yearns to spend some quality private time with his son for three to four days discussing the random trajectories of their lives and where all, destiny intersected with those complex trajectories.

Old age is not a problem. The persistent fog in his mind is. Kanai perpetually feels, he is falling through air, or he will fall down. He is not sure whether he is suffering from vertigo.

Two years back, Kanai concluded, his life was so wasted that he is incapable of loving or be loved. With Mrinal, of course, it is different.

Kanai drinks a lot of black coffee nowadays. This affects his sleep. It takes him around two hours in bed to fall asleep. In half-sleep, Kanai longs and aches to cry but he cannot.

During conversations, Kanai hears himself giving references from his life as old as thirty-two years and gets shocked to find, how far he has travelled in life.

When, rarely and occasionally, Kanai stands before the mirror he understands what it means by ravages-of-time. Yet, the flab on his tummy, the receding gray hairline and the loosening of muscles are not all that worry him. He worries about Mrinal: a superbly-aspirational-and-hungry-for-success-youngster. Kanai understands the pitfalls of such a chase. Sometimes, he desires if Mrinal could get a partner with whom he could share a part of his life and vice-versa. This would relieve Mrinal’s dependency on Kanai for emotional support.

Mrinal does not trust people easily and as such, this nature of his stands in the way of his entering into a relationship organically. Moreover, he has had a history of a troubled relationship in his adolescent years with a cousin of his.

Kanai is deeply worried about this part of Mrinal’s life.

Kanai knows the decay that has set in in his life will take him downhill. Perhaps, mid-way he will meet death and later he would want to hover around Mrinal’s life like a ghost: counselling him and touching him when he is lost and sad.

Sometimes, Kanai doubts whether Mrinal protects himself from the pushes and pulls of love. As if, Mrinal has created a barrier around him from falling in love.

Kanai wanted to do this when he was young. But could not achieve it and rather, fell in love frequently, which he later thought destroyed his remoteness. Now, when he finds that in Mrinal, he wants it to be otherwise!

2. Kanai walks down the moss-lined cobblestoned stairwell inside a black slithery stone vault Kanai smells the air: trapped since ages Smell of rotting flesh and bones and dried-up blood Smell of rotting metal, Smell of ancient damp Canopy of cobwebs and spiderwebs, Hissing sounds of lizards and serpents fill up the air with mystery. This is where the carcasses of his ancestors have been frozen And, stored in the subterranean vault arising out of a family feud: a bloody war for land, jewels, emeralds and rubies

A powerful outsider taking advantage of the family feud finished the family one-by-one stabbing backs of each silently Kanai had run away to a distant relative’s house in an adjacent town Kanai never forgot the yells and bloodshed and the travails of his lonely life Kanai knew he had only a few days of his life with ulcers oozing inside his belly In death, he wanted to be with his ancestors. Yet in this darkness, the fear of death returned to Kanai. He looked at the stairwell in hindsight crushing on him like a crumbling structure

3. This house gives Kanai comfort and a place to return to. Yet, Kanai does not feel rooted to this house. Kanai feels restlessness and anxiety filling him up and smoke entering his soul all the time.

Kanai’s wife lives a life that does not crisscross his life. Kanai and his wife do not sleep together. In fact, they lead separate lives. Yet, she serves him with all the amenities and facilities since Kanai is a novice at household chores. Sometimes, Kanai doubts his wife may throw him out one day and bring in one of her lovers instead.

Kanai has a job that pays him well. Yet, he is not satisfied with his work. The hole in his chest filled with darkness is enlarging. The pleasure of writing is also leaving him.

All his life, Kanai has dreamt of escape and evaporating.Yet, he neither had the strength to escape and the necessary properties to evaporate.Sometimes he wants to run through paddy fields. He doubts whether his lungs are strong enough.