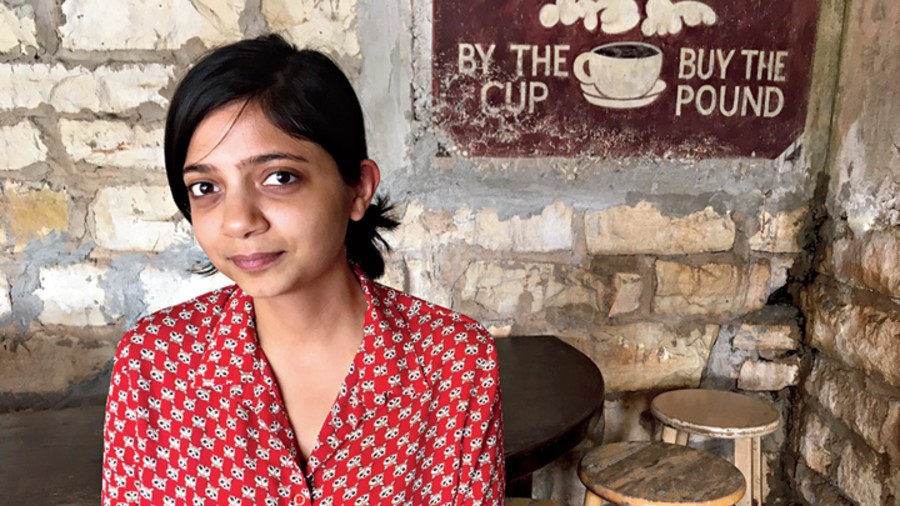 Two-time regional winner of the Commonwealth Short Story Prize for Asia, in 2012 and 2017, Anushka Jasraj’s debut collection of short stories, Principles of Prediction (Context; Rs 499) explores the folds and nuances of human relationships and the various shades and emotions of people in unique situations, all in fluid prose. Anushka, a 2015-16 fellow at the Fine Arts Work Center in Provincetown, has a BFA in Film Production from New York University, an MFA in Creative Writing from the New Writers Project and an MA in Gender Studies from The University of Texas at Austin. She identifies herself as a feminist and in her own words, just wants to be able to keep writing the things that she wants to write on.

The Telegraph caught up with the promising fiction writer and Mumbai girl, who confessed to being excited and nervous at the same time, for her debut book, for a short telephonic chat. Excerpts.

Is there a broad thematic unity in the stories in the collection? Do you have a personal favourite from the lot?

The stories have been written over such a long period that some of them have their distinct worlds. The earliest story in the book was the radio story that I wrote in 2011 and the most recent story was written last year and edited this year. My thesis advisor in MFA sometimes would say the connecting theme should be that ‘you wrote them.’ I am indeed the connecting thread, and some of my obsessions are clear to the reader right from the start. If I had to choose a favourite from the collection, it should be the last story in the book, Luminous. I guess I just enjoyed writing the story and at that time I already knew that Westland was going to publish the collection so I was able to write very freely and have fun with it, with the knowledge that it will be published. (Laughs)

Your stories have explored queer dynamics, the female experience within the tropes of love and marriage within the larger backdrop of politics. How important is gender in your stories and what are some other themes that you want to write on?

I don’t start writing with the thought that I am going to write about gender but I think probably somewhere in the middle of writing this collection, based on the kind of responses I was getting, it became clear even to me that gender is something I’m interested in and that’s also kind of why I did my Masters in Gender Studies. Familiarising myself more with the academic conversations and the theories around it caused my thinking to evolve and I am sure the imprint of my thinking comes in obviously, though not consciously. The theme of memory is kind of an obsession of mine, which is going to come up in the next work.

What drew you towards writing as a career choice, considering the uncertainties tied to it?

I still struggle with that problem! Even earlier this year I thought okay, my writing career is over, what I should do with my life! (Laughs). So I think that probably for a lot of people who want to write there’s still some ambivalence because it is tough, yes, but for me, I don’t feel fulfilled doing something else. I’ve tried to keep full-time jobs in other fields but I feel most alive when I’m writing! I also think that avenues like the Commonwealth Short Story Prize have made writing as a career option seem more feasible because a lot of people are taking up writing now.

How were you introduced to the world of literature, reading, and writing?

In terms of being introduced to literature, there was Arundhati Roy, Bapsi Sidhwa, and in terms of my readings as a young person, Judy Blume and the Nancy Drew series were there. It helps that there are books around you. I always saw myself more as a reader. The idea that I could also write came up later.

Do you think the literary culture of India accords due space for short story writing as it does for other literary forms like novels?

What attracted you to the form of short story writing? Do you want to explore other, shorter forms of writing such as say, micro-fiction?

Initially, I thought I would be a screenwriter. I was trained in screenwriting in my undergraduate studies, but I love language so much that the form of the screenplay didn’t suit my style. I write very descriptive things, so prose became more suited to me. For short stories, I wouldn’t say they are easier to write, but I think my style is more concise so that was the form that suited me the most. I have tried writing micro-fiction but I enjoy creating characters and getting into their perspective. So, micro-fiction is a different challenge altogether.

How has your training in film production shaped your approach to writing? How difficult is it to keep going back to writing in the current times?

Studying films has made me a better writer and has shaped my approach to writing because, in film writing, there seems to be a lot of rules that can be useful if you don’t stick to them very strictly. It’s fun to play around with the rules while being aware of them. It also helped me understand how a plot functions; that characters must always have some kind of desires and obstacles to overcome, but I guess the short story can also allow you to disrupt the rules. In terms of writing in current times, it has been a bit difficult. I write in my diary every day and that is something that I have been doing for almost a decade. It is one of the few things that I still do now and is something that I still consider as practice — translating my experience into language.

How pivotal is the place in your stories and do you wish to tap into other geographical settings along with Bombay?

In the collection, there is one story based in Texas, where I lived for five-six years. I wanted at least one story that kind of connected to this place that has been meaningful to me. It is again something not consciously done, but just living in a place, the space that you know and understand, so even when you are imagining a world, the blueprint is whatever is already there in your memory.

So far you’ve written without an audience in mind because you didn’t expect to get published, but now that you are, will you look at the prospect of readership differently?

Yeah, I have been thinking about it a lot more recently. Now that the book will be out, I guess I have to pretend that no one is going to read the stories because otherwise, I don’t think I will be able to write, it would be too embarrassing! (Laughs)

(Laughs) We’ve talked about how it’s tough being a writer. I also enjoy teaching and working with people on their writing projects and now that I also have the credibility of a published book of my own, I am hoping to teach in some writing workshops in the coming year.