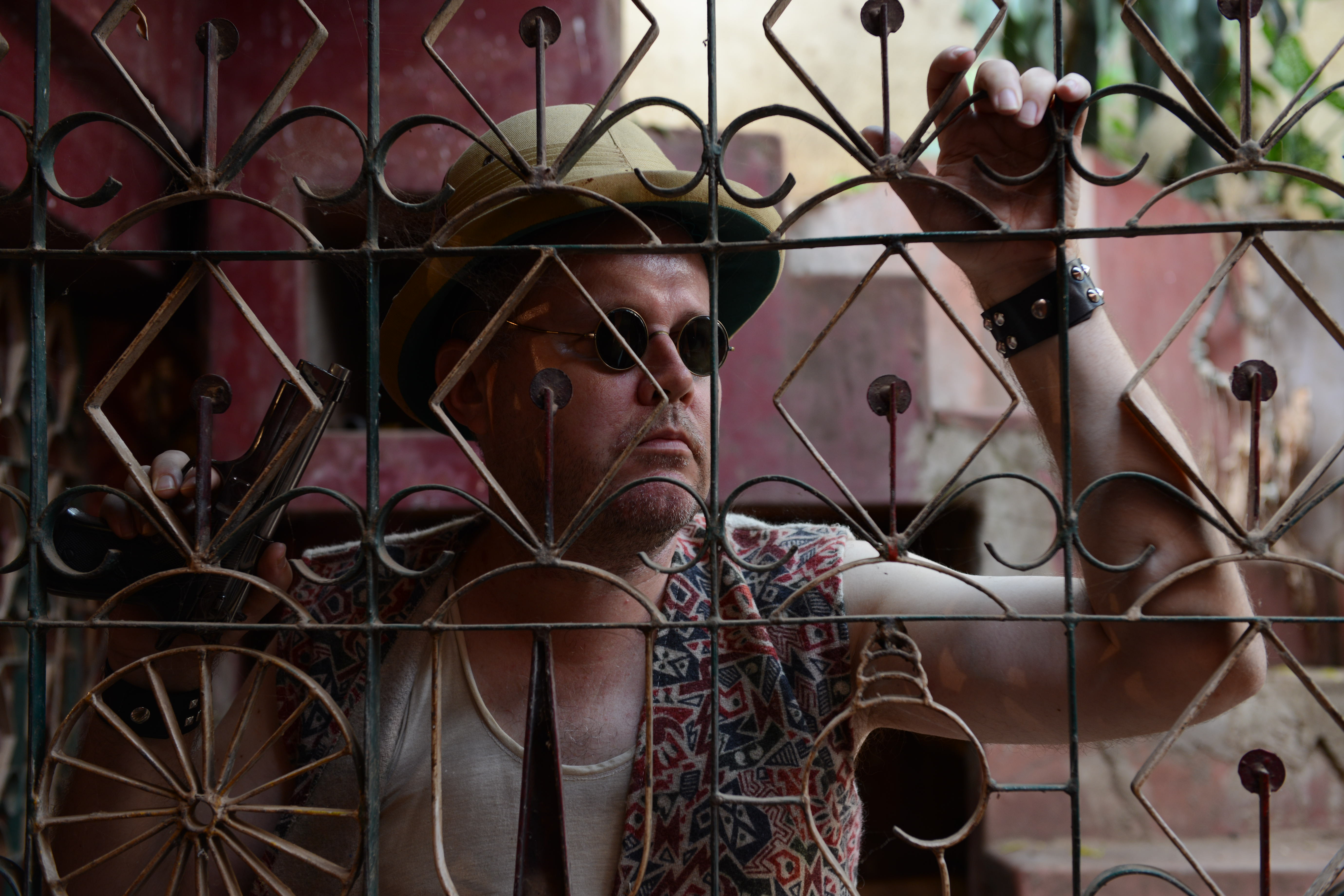 For Bread Alone by Mohammed Choukri is set in Tangier of the 1950s – when it was known as the International Zone, where foreign writers flocked to write exotic novels and the town was full of international double agents and triple agents. But this is a purely Moroccan view of the sordid scene – petty crimes, drugs and smuggling, brothels, brutality and sleaze – and it is also, most amazingly, a semi-autobiographical account of Choukri’s life on the dark side and how he eventually decided to learn to read and write at the age of 20, resulting in him penning this gem of a novel or whatever it should be called. A cult hit it became, certainly, and it was comprehensively banned in Morocco until shortly before the author’s death in 2003. Twice adapted to celluloid.

The Crime Scene by Li Er is a Chinese favourite of mine, also done in the Truman Capote manner of non-fiction novels. Based on interviews with a gang of bank robbers before their execution, it begins by stating in the preface that they ‘are not born ruthless or evil, nor do they have any particular hatred for society. However, they take a juvenile approach to life and recklessly commit crimes.’ Despite this disclaimer and the obviously didactic intent, this little book is delightfully hardboiled with a suitably tragic ending – the robbers realize that they’re too rooted in their hometown to know where to run after their crimes have been committed. But by then it is too late to turn back, they’ve killed too many people. In the end, all they can do with the 640,000 Yuan loot, as they hide out in the hills, is to use banknotes in lieu of toilet paper.

To begin with, let’s look at something close to home. Amitav Ghosh is certainly not best known as a crime novelist but his The Calcutta Chromosome ranks in my books as one of the most inventive detective plots. This early book of his is perhaps not as widely read as it ought to be. It tends to get overshadowed by his later epic bestsellers but The Calcutta Chromosome is an amazing amalgamation of sci-fi mystery and gothic horror with locations ranging from the picturesque Nilgiri mountains to Calcutta of yore. It also won the Arthur C Clarke award, the UK’s foremost prize for science fiction.

Looking for an unusual, surprising and bewildering read? Then here’s your list. These are not exactly detective novels in the traditional sense, but I’d rank them as the best noir-ish reads, some new, some old, but all full of mystery and madness.

Chris Womersley’s by now ten-years-old debut noir literary thriller The Low Road – about a petty criminal, a suitcase full of stolen money, and a morphine-addicted doctor in the outback – won Australia’s top prize for crime fiction, the Ned Kelly Award, and became an unexpected hit down under. He isn’t your standard pulp writer, though, and isn’t interested in formulaic genre fiction which is quite obvious from his eerie and lyrical novels, such as the neo-gothic Bereft which is set in 1919 when the Spanish flu epidemic raged in Australia and apocalyptic movements flourished, or Cairo which is loosely based on a bizarre real life crime that took place in Melbourne. Is he the best Oz writer ever? Yes, I think he might be.

The Devotion of Suspect X by Keigo Higashino

The Devotion of Suspect X was a rage in Japan when it was originally published. Once translated, it even found its way to Indian bookshops. And it’s no wonder – for it totally reinvented the old whodunit puzzle with aplomb, turning misdirection into an art as beautiful as calligraphy, with no obvious gimmicks or fakery, but relying merely on perfectly tight and light writing. Subsequent releases by the same author, such as the menacing Salvation of a Saint and the dazzlingly brilliant Malice, continue to thrill the world. And me.

Midnight in the Garden of Good and Evil

Midnight in the Garden of Good and Evil is a true American classic and it is still often debated whether it should be considered a novel or not. Should it be called a book length reportage? Well, it was shortlisted for the Pulitzer Prize. New York journalist John Berendt settled down in the southern town of Savannah – with its quaint yet creepy atmosphere – in order to experience something of the US outside the Big Apple and chronicle his experiences there. He befriended the town’s eccentrics and, while hanging out with the wackiest of them, was pulled into a bizarre murder case involving a prosperous antiques dealer, a Nazi-era Luger pistol and even a bit of black magic voodoo-hoodoo. The book spent 261 weeks on US bestseller lists, was filmed with John Cusack playing the author, and its success turned Savannah into a centre of literary pilgrimage.

The just published Sweden’s Dark Soul might also become a seminal book – here a protégé of late crime writer Henning Mankell, investigative journalist Kajsa Norman, sets out to uncover the sordid realities of the country that changed the face of global crime fiction by introducing the world to Scandinavian noir and Swedish crimes. Written in the best tradition of Stieg Larsson, but with the difference that everything here is real, it vividly describes all that’s nasty about the welfare state, from racism and psychopathic bureaucracy to media cover-ups of atrocities against children. A genuinely scary book!

Last but not least, another path-breaker is Sonchai Jitpleecheep, a Thai police investigator featured in the novels by John Burdett – such as Bangkok 8, a thriller that converts the reader into thinking about crime and detection in a rather unforeseen Buddhist way, where each action has its corresponding fallout, thereby changing the entire idea of crime and punishment. Apart from vividly described settings in the seamy underbelly of Bangkok, the adventures of Jitpleecheep take us to the northern rural provinces from where impoverished girls migrate to Bangkok in order to support their rice-farming families (Bangkok Haunts) and to Thailand’s deep south where militancy brews (Bangkok Tattoo has an intriguing 9/11 theme). Motion pictures are said to be under development. Karma and crime, anybody?

The Shadow of the Wind

In his mega-bestselling and now classic The Shadow of the Wind, Spanish writer Carlos Ruiz Zafón took readers to atmospheric bookshops and weird libraries in Barcelona, such as the top-secret ‘Cemetery of Forgotten Books’ run by a bookish sect. After it was translated into English, it sold millions of copies worldwide, turning it into the all-time biggest Spanish literary hit and breathing fresh life into the musty genre of bibliomysteries. In Barcelona, nowadays, you can take guided walks through the places described in the story although the ‘Cemetery of Forgotten Books’ does not exist in real life, unfortunately. Anyway, if you don’t have the spare cash to fly all the way to Spain on your next holiday, this book will surely take you there and far cheaper.

Roberto Bolaño’s The Savage Detectives may have the perfect name for a cold-blooded detective novel, but it is actually an offbeat masterpiece about forgotten Mexican poets. At the centre of the plot is a long lost poetess, who disappeared way back in the 1920s in the sinister Sonora desert, crawling with scorpions and tarantulas. Years later, two slightly manic and quixotic poets go on a frenzied search for her across Mexico, a chase which eventually leads them to Juarez (on the opposite side of the Rio Grande from the US city El Paso) – a town that has the world’s highest homicide rate. The narrative is, of course, packed with tequila, violence, pot and lunacy. In my mind, The Savage Detectives remains one of the most imaginative stories of detection ever written, a poem in hardboiled prose.