If you are planning to introduce climate change to your toddler, here is a curated list of books that might help 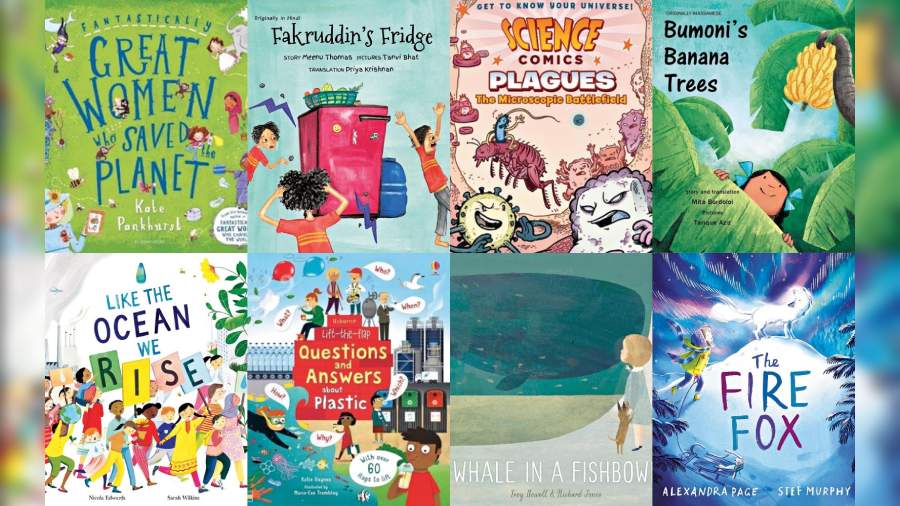 In ancient times, there was a military commander named Flavius Belisarius serving in the Byzantine Empire under the emperor Justinian I. Nicknamed ‘Last of the Romans’, Belisarius was a true master of deception, using unusual stratagems to keep his usually larger enemy armies at bay. According to Constantinople court historian Procopius, both Belisarius and Justinian I lived long lives.

However, another event during their reign is more relevant to modern times. ‘The Justinianic Plague’ or the pandemic of bubonic plague, which according to sources first appeared in 541 AD at the outer provinces of the empire. This is the first time that a plague pandemic is recorded in the history of the world. Caused by the bacterium ‘Yersininipestis’, it raged most of the Mediterranean world for the next 225 years. Spreading wherever trade, commerce, and war went — rats, fleas, and the plague followed.

It did a lot to weaken the fortunes of the Byzantine Empire. According to historian Colin Barras’ accounts, Procopius also recorded climatic changes taking place in southern Italy at this time. ‘Unusual incidents of snow and frost in the midst of summer; below average temperatures; and a decrease of sunshine’. It was a time of warfare, plague, and tired swaths of hungry people migrating all over.The social situation combined with the unawareness of the general population created ripe conditions for the epidemic that followed.

Nearly 2,000 years later, nothing seems to have changed. We continue to fight a pandemic and war in Europe while fending the slow but steady repercussions of climate change. April’s heat wave warnings in Calcutta were replaced with swooning tweets in early May, welcoming the arrival of the annual Kalbaisakhi.

At the bookshop, we thought it appropriate to put together a list of reading recommendations based on climate change for young readers. Use these books to not only start the conversation around the environment at home and in school, but to also explain the way ahead to the next generation.

We begin the selection for toddlers with Lift the Flap Questions and Answers about Plastic. Lift the Flap is a wildly popular series. An interactive set of books introducing kids to different issues across the board, this book is on the perils of plastic. Each brightly illustrated question takes younger ones through a sort of history of plastic, answering questions such as why is there so much plastic in the world and why can’t we simply burn it? It even talks about how the problem could (potentially) be solved, with the help of world leaders and legislation. Special mention to the author for highlighting the work of lawyer Afroz Shah who in 2015 began a large-scale plan to clean up Versova Beach in Mumbai. The project helped bring back turtles who found safe places to lay and hatch their eggs.

Closer home, meet Bumoni and her Banana Trees. She lives with her family outside Kaziranga National Park, and her backyard is bursting with banana fruits, flowers, leaves and stems. The family uses every part of their crop in their daily life. One night, a herd of elephants cross the river and begin eating the bananas. They return night after night. An upset Bumoni has a plan to ensure that they don’t damage the crop, but at the same time ensure that the hungry elephants get something to eat. Originally written in Assamese and translated by Mita Bordoloi, the illustrations by Tarique Aziz bring to life a family’s sustainable relationship with the environment and elephants.

Fakruddin’s Fridge is from central India. In Bhopal, young Fakruddin worries about everything and is always asking questions. One day when his refrigerator at home stops working, he gets anxious — how does his family survive the hot summer without cold water? What follows is a journey around his neighbourhood as he tries to look for a solution. This book helps start the conversation around appliances and the impact they have on our environment.

Dancing Bees gives one an insight into ‘the mad mad world of creepy crawlies.’ ‘If you could jump like a flea, you could play hopscotch over tall buildings/if a spider could spin a web with threads as thick as a pencil, it would easily be able to catch a flying jumbo jet (and all its passengers)’ Written by Ranjit Lal and illustrated by Ashok Rajagopalan, this picture book talks about funny but true facts about creepy crawlies, and could well start a discussion around insects, nature and their relation to the human world.

We meet our Roman friend Justinian I and Belisarius once again in the Get to Know Your Universe Science Comics series. In Plagues, meet doctors who stumbled onto the concept of germ theory without knowing why their elaborate outfits complete with a mask truly worked. Other books in the series include coral reefs, rockets, volcanoes, dogs, and more. This is a series of 10 graphic novels exploring the depths of the ocean, furthest reaches of space, and everything in between. In hindsight, these could very well double up as school texts. The graphic sensibilities make the learning experience a very systematic one.

In Kate Pankhursts’ Fantastically series Great Women Who Saved the Planet, read about the impact that women had on the earth’s conservation movement, their lived experiences, and how their legacy lives on even today. Meet Eileen Kampatuka Brown and Eileen Wani Wingfield who fought and won against the government in Australia who wanted to build a nuclear waste dump close to their desert home in South Australia. Read also about the Chipko Movement and Chandi Prasad Bhatt, the bedrock of any Indian environmental classroom lecture. A great introduction to alternative careers rooted in conservation.

Speaking of safeguards, Whale in a Fishbowl is about a whale named ‘Wednesday’ who lives in a huge fishbowl in the middle of the city. This is the story of how she yearns for the ocean. A tale of finding oneself, freedom and belonging. For children, this simple but thoughtful book can encourage conversations based on the animal laws and their freedom.

A similarly-themed and equally dazzling picture book is The Fire Fox. This is the story of Freya who moves into a log cabin with her mother in the middle of a cold winter. She is terribly bored by the silence of it all and decides to go out and explore the frozen wilderness. Freya runs into a white fire fox whose fur shone like the moonlight. ‘The sky would dance with light, flickering over the hills and trees and snow’. It was indeed a magical place after all.

The tale is inspired by the Saami myth of the fire fox, whose fur scatters sparks into the sky to become the Northern Lights. It’s also a great tale to start talking about the magnificent natural phenomena across the planet.

To conclude this selection, we’ve chosen Like the Ocean We Rise, a peek-through picture book that explores humans’ impact on our Earth and how we can make a difference such as the movements led by younger generations.

‘We march here in Delhi to show that we care. We must use less fuel so we have cleaner air. We’re marching, we’re singing, we’re banging the drum, and we will not stop until something is done’. This week/weekend let that thought guide your reading recommendations.

The author is a PhD candidate in journalism and electronic media at University of Tennessee Knoxville and runs the independently owned Storyteller Bookstore in Calcutta. Get your book recommendations @storytellerkol on Twitter and Instagram