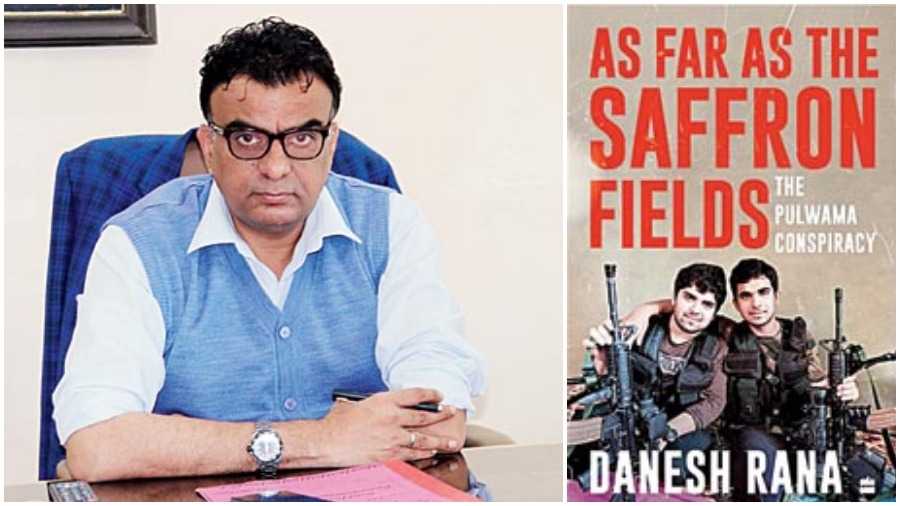 (L-R) Danesh Rana; On the third anniversary of the Pulwama terror attacks in J&K, HarperCollins India published a definitive account of the conspiracy that unfolded before and after it — As Far as the Saffron Fields: The Pulwama Conspiracy (Rs 599)
Danesh Rana   |   Published 16.02.22, 02:20 AM

Iqbal was born in 1995, the year Charar-e-Sharif was caught in a long military stand-off between security forces and hundreds of armed militants who had taken refuge inside the premises of the shrine and the adjacent mosque. The security forces had laid a siege to flush out the terrorists. While the impasse went on, the terrorists built bunkers around the shrine, forcing the majority of the townspeople to abandon their homes and migrate to adjoining villages.

The affair turned into an international media spectacle, with Mast Gul — in a camouflage jacket, his long hair falling out from under a pakol cap as he wielded a Kalashnikov — becoming its mascot. Born as Haroon Khan in Khawaja town of Peshawar, Mast Gul was a product of jihadi employment who rose up to become a prominent Hizbul commander. To end the impasse, he was allegedly offered safe passage by the security forces, which he refused to accept.

On the night of 11–12 May in 1995, the shrine mysteriously caught fire, and the wooden structure was gutted in no time. About a thousand houses and hundreds of shops in the vicinity were also engulfed in the flames and reduced to ashes. A gun battle followed, which continued for hours, and about thirty terrorists were killed while the rest managed to escape. Mast Gul himself piggybacked on a fire tender and found a way out. It was later alleged that he had indeed accepted the proposal of safe passage and that the Indian forces had helped with his escape. (There is no evidence to authenticate this.) A few months later, Mast Gul was given a rousing welcome by thousands of sympathizers when he resurfaced in Pakistan-occupied Kashmir.

Iqbal was a good student, with a particular interest in zoology. He aspired to become a doctor but ended up enrolling in an undergraduate nursing programme in a Srinagar institute. He was selected in an engineering college as well as a veterinary sciences college, both in Srinagar. When investigators later asked him why he chose nursing instead, he said he thought it would give him more time to work for tehreek.

Iqbal had shown a leaning towards spiritual purity from childhood. He even wrote a book of Sufi poetry in Urdu called Azhaar, the Arabic word for flowers. During visits to holy places in Budgam and Pulwama, he came in contact with Mohammad Amin, a resident of Aglar, Shopian, who worked as a fruit seller. It was through Amin that he met Ashaq Ahmad Nengroo, Amin’s brother-in-law and the man who met Umar’s group under the bridge. The meeting with Nengroo would change his life.

Nengroo had been associated with JeM from the time his youngest brother, Mohammad Abbas, was an active militant with the organization. Although Abbas was killed along with the JeM divisional commander in an encounter in 2013 in Ichhgoza village in Pulwama, Nengroo continued to work with JeM as a trusted OGW. Nengroo was a religious man, and he was able to answer some of the questions Iqbal had when they met, which motivated the latter towards jihad. Then one day, he took Iqbal to an apple orchard and introduced him to Mahmood, one of the most dreaded JeM terrorists from Pakistan. Mahmood turned out to be a Hafiz (one who has memorized the Quran), and he had a prolonged discussion with Iqbal about Islam and jihad. Iqbal made up his mind and started working for Nengroo’s transport module.

Iqbal collected Nengroo’s Fiat Punto from Rajpura and drove to Jammu on 13 April. After a few phone calls, he met Nengroo in a transport yard in Narwal and they chalked out their plan. Narwal is a busy locality on the bypass road to the south of Jammu. Once known as the outskirts, Narwal has now been subsumed by the rapid expansion of Jammu, and transport businesses, spare-parts shops, petrol pumps and automobile workshops can be seen there. Truckers visit Narwal to fetch their wares from various godowns, vegetable markets and dry fruit stores. A number of butcher shops, tandoori restaurants and wine shops have also opened here, and the place is crowded at most times.

Nengroo and Iqbal made a formidable team. In the previous four months, they had together picked up five out of seven groups consisting of about two dozen JeM terrorists from the highway and dropped them off at predetermined sites. It was a mutually beneficial relationship too, with both the ideology of separatism and the greed for money driving them. It was risky, but even the risks were lucrative.

At Narwal, the two of them had dinner in a restaurant. After that, Iqbal’s car led the way and Nengroo’s truck followed as they drove towards Pathankot. They kept conversing with each other through signals from dippers, tail lights, indicators and headlights.

An hour and a half later, Nengroo blinked his headlights and asked Iqbal to stop. They parked their vehicles well short of the meeting point and with reasonable distance between them. Thus began the anxious wait for their mehmaan, the guests from Pakistan. Four hours later, Nengroo finally received a WhatsApp call from Pakistan. JeM handlers told him that Umar’s group had successfully arrived under the Bein River bridge. Nengroo drove a few hundred metres ahead, climbed down from the truck and sidestepped on to a dirt track that led under the bridge. The five terrorists were leaning against the rocks and the bridge’s piers, heavy rucksacks by their sides. The others looked on anxiously as Umar exchanged a few code words with Nengroo to confirm each other’s identities. ‘Khushamdeed,’ Nengroo finally welcomed the group and hugged them one by one. Even then he knew Umar was the ‘special package’ in this shipment. JeM was utterly worried about him, as the nephew of Masood Azhar, a loving son of Bahawalpur and an Afghanistan-trained mujahid.

A few minutes later, Nengroo had escorted them to the truck. But Umar refused to sit in the back and insisted that the group sit in the driver’s cabin. There was no time for arguments, and Nengroo reluctantly acceded to his request. Being an experienced OGW, he knew how dangerous this could be. After dumping their weapons and rucksacks in the cavity between the sacks of flour in the back, the terrorists boarded the truck. With a pistol tucked inside his jacket, Umar sat in the front, while the others sat behind the driver, two of them carrying pistols and a grenade. Nengroo gave Iqbal a missed call, and Iqbal turned the car back towards Jammu.

Nengroo assured Umar that no danger would befall them. ‘Inshallah, we will be in Pulwama by this evening.’ He then revved up the engine and began following the tail lights of the Punto that was now speeding on the highway. Sitting in the front, Umar looked almost like he could be the co-driver or the truck driver’s helper. Huge billboards on the sides of the highway passed them by, advertising Bhatia Sons, the famous garment store in Jammu; Rakesh Jewellers; Chuni Lal Amar Nath Dry Fruit Merchants and Blue Moon Banquet Hall. Umar may not have known these names, but he would have recognized the faces of Narendra Modi and Amit Shah beaming against saffron backgrounds on the other billboards.