Blueprints of an uprising

The edited volume by S.Z.H. Jafri brings together 22 articles related to the Great Revolt 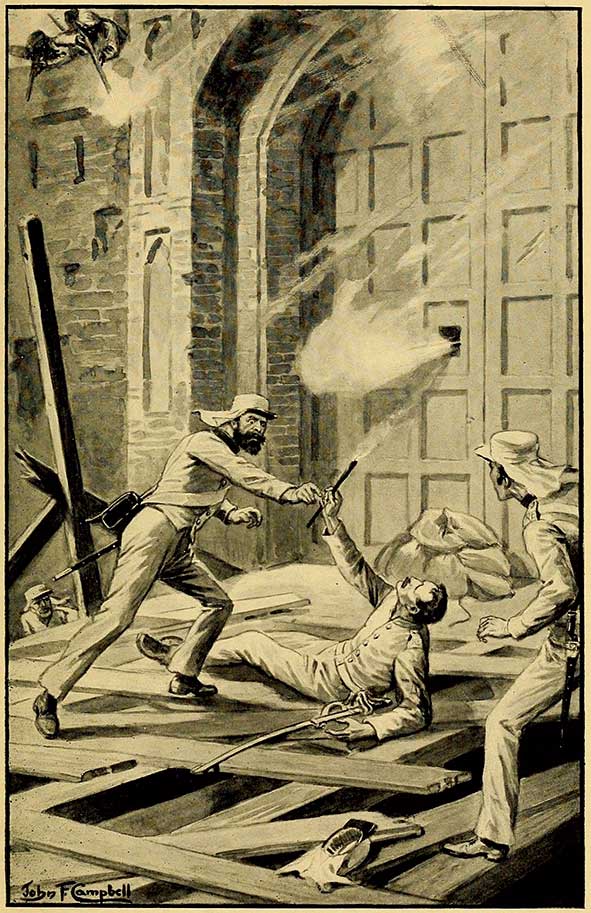 An illustration of the blowing up of the Kashmiri Gate in Delhi by John F. Campbell
Source: Wikimedia Commons
Shantanu Chakrabarti   |   Published 05.03.20, 06:37 PM

The Great Revolt of 1857 has been one of those moments in Indian history that have captured both intellectual and popular imagination since their occurrence. That fascination has endured over time as is reflected in the ever-growing literature on the subject, popular and academic, leading to enrichment of the historiography of the Revolt through diverse interpretations. While centenary ceremonies in 1957 and the commemoration of 150 years of the event in 2007 generated voluminous spurts in writing, there has been a steady stream of contributions surrounding the momentous developments of 1857. The diversity in the research concerning the subject has helped in reaching an academic consensus on the fact that 1857 was too complex a movement to be adequately explained in terms of general categorizations. But this has not caused interest to ebb or stemmed the flow of contributions on the subject.

The edited volume by S.Z.H. Jafri brings together 22 articles related to the Great Revolt with the main thematic focus being on the recovery of the ‘vision of the vanquished’ from their own narratives in Delhi and Lucknow, two major epicentres of the Rebellion. The volume has largely reproduced papers presented during the 68th and 70th annual sessions of the Indian History Congress held in 2007 and 2010 along with several other articles pertaining to the main theme of the book. The editor, in this connection, challenges one of the most prevalent popular notions that the Revolt represented one of the last major ‘pre-modern’ assaults by the indigenous population on the British colonial structure in the Indian subcontinent. While much of the earlier Marxist historiography had covered in detail the leadership provided by the indigenous feudal class even though there was widespread popular participation, recent research has tended to raise more interesting questions as to how the nature of the Rebellion itself led to transformations within the old order, leading to more complexities. The historian, Rajat Kanta Ray, for instance, has described the alternative order that emerged as one that was curiously republican-democratic, which coexisted with a hierarchical, princely structure and the restored feudal order.

Several articles in the present volume, for example, Shireen Moosvi’s “Rebel Journalism: Delhi Urdu Akhbar, May-September 1857” and Iqbal Husain’s “Lucknow between the Annexation and the Mutiny”, introduce the readers to hitherto little explored indigenous sources like the Delhi Urdu Akhbar, published from Delhi, and Tilism, from Lucknow. The Delhi Urdu Akhbar, produced since 1837, had emerged as a prominent mouthpiece of the rebels while Delhi remained under rebel control for a few months in 1857. Tilism, a weekly Urdu newspaper, was published by Muhammad Yaqub from Firangi Mahal after the annexation of Awadh till the outbreak of the Rebellion in Lucknow. The sympathetic way in which such papers had covered the nature of colonial exploitation and gradually emerged as supporters of the Rebellion, argues Shireen Moosvi, was indicative of how the “very process of resistance transformed the mentality and created a patriotic surge”, a sentiment which was equally reflected in the Delhi court’s imperial weekly, Siraj ul Akhbar, in Persian.

In order to capture the spirit of this “inchoate nationalism”, Jafri argues, more attention must be given to such indigenous pamphlets, proclamations, appeals and pamphlets issued by rebel leaders and sympathizers, as the influence of the new medium — the “printed word” — facilitated mobilization since “the ideas which germinated under the influence of the British rule might have played a greater role in the course of the events than has been recognised so far in modern historical writings”.

While the volume does the important task of compiling several interesting essays related to the indigenous sources on the Rebellion and important rebel leaders, one drawback lies in the fact that it is exclusively focused on the Muslim rebel leaders in Delhi and Awadh. There has been a proliferation of research in areas like the sepoy/civilian dichotomy along with the role of marginalized groups like the Dalits or the courtesans/tawaifs and their interface with the upper-caste Hindu and the Muslim elite rebel leaders. Pankaj Rag had pointed out recently that anti-colonialism of the 1857 type was not necessarily liberating in an unproblematic sense for subordinate groups such as low castes and women.

The other issue is how the English-educated urban elite sought to interpret the legacy of the Rebellion. While they, by and large, remained opposed to the agenda of the rebels to bring back the pre-colonial order, the Western-educated Bengali elite, as shown by Swarupa Gupta, began representing 1857 within a wider discourse on nationhood by deploying the conceptual category of samaj, with the utopic and inclusive space of the continually-incorporating samaj moving beyond ‘Hindustan’ towards ‘Bharatbarsha’, thus transcending and marginalizing the localized nature of the Revolt.

Inclusion of some of these research queries within the regional ambit in focus (Delhi and Awadh) would have made the volume more representative and interesting.