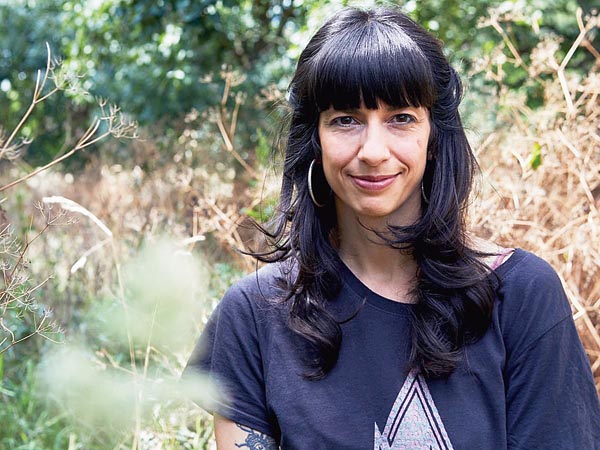 Melody Razak is a British-Iranian author who received her English literature degree from Leeds University 25 years ago. However, her interest and love for cooking led her to the kitchen where she was a pastry chef, later opening her own cafe in Brighton. Reading remained her passion till she turned 40, decided to sell her cafe and go back to college to earn her MFA degree from Birkbeck. “I wanted to travel, talk to people, write about the human condition and read a lot. And as much as I loved the cafe, it was very limiting what I could do. So in the end, I had to sell it in order to be able to write the novel,” Razak tells us on a video call about her fiery debut novel Moth (Hachette India; Rs 599) centred around the year 1946-47 in India.

That she travelled extensively through India soaking in the language, culture and beat of the country is evident in every page of the book that she was decidedly nervous about. Challenges like editing, making the choices with language to prevent herself from sounding too contemporary and the attention received by a debut author aside, Razak had to do the mammoth task of extensively reading Indian writers and eventually “feeling a heart connection with Indian bookstores” with their well-curated shelves.

Moth begins with a prologue that stays with you long after you have finished reading the book. Dark and hair-raising, on a rain-soaked evening a mother carrying her newborn in one hand and a knife in the other marks the ‘birth of a nation’. The book narrates the tale of a progressive family of four who are preparing for the elder daughter, 14-year-old Alma’s wedding. Her younger sister Roop, who is all of five, is obsessed with the idea of death and the girls are brought up with ideals that do not discriminate between caste, class and religious structures. Both Ma and Bappu are professors at a university and it shakes Bappu’s bones at the thought of marrying off his beloved daughter so early. But times are not safe for women with pillage and plundering of the woman’s body being rampant amidst growing political unrest. In the heart of Old Delhi, in a house named Pushp Vihar, the family’s reluctant excitement for a wedding is juxtaposed with the trouble brewing in the country. Brutally narrated in places, Razak’s prose is vibrant with pain and sharpness of awareness, surprising for a debut.

It was a need to write about something political, intimate and about women that led Razak to the trauma of Indian Partition in 1947. Listening to the radio one night in her cafe, she heard a show called Partition Voices –– interviews of elderly survivors and their experiences of living through the Partition of India. She was moved. “It wasn’t just about the political and geographical rupture in India. It was ruptures between families, between friends, between people because there was so much love there. And that was kind of ripped apart,” she said. What was further intriguing was the gaping hole in her A-level history syllabus which had no mention of the Partition –– an event for which ‘the British were to be blamed’, she said. Drowning herself at the library for three months, Razak devoured more and more information and finally embarked on a journey through India. “I wondered if I might even be the right person to write this story since I was not an Indian, but the more I read the more I was just determined that this is what I wanted to do,” she said.

Delhi, Varanasi, Bhuj, Mumbai, Rajasthan, Gokarna, Mysore, Hampi, Darjeeling and Leh were places she spent her time in, listening and talking to people. Her love for the Golden Temple took her to Amritsar where she also visited the Partition Museum. “I did go to the museum. And it was very helpful for me because there’s a real emphasis on objects that people have carried with them, like dresses and pots and shoes, and there is a lot of poignancy in these objects — how, when you lose everything, you hold on to this one pot, and it becomes the most important thing in your life. And I think we live in such a materialistic society, we forget that these objects would have meant a lot to these people,” she added.

Her Iranian mum’s influence led Razak to identify similarities between Persian culture and language and that of India’s, even admitting to understanding Hindi because of the use of Persian words in it, which all started feeling “familiar” to her. While reading formed a large crux of her research, she even looked at fiction to draw inspiration from, having read Salman Rushdie’s Midnight’s Children, Anita Desai and short stories by Sadaat Hasan Manto. Twilight in Delhi by Ahmed Al is another book that made to her reading list. “I did a few walking tours in Ahmedabad and Varanasi, speaking to the tour guides and locals, sitting in chai stores listening to people talk,” she admitted. However, her wish to go to Kashmir remained unfulfilled, having been told by a guesthouse owner that it would “not be safe”. Moth maybe based in the year 1946 but it feels contemporary. Razak agrees, having felt the problems of Partition in India to still be existing in society. “The situation in Afghanistan at the moment has such a resonance again, of a similar story of a big Western power leaving this country to just fall apart, and completely abdicating their responsibility of nurturing a country and giving them a good political, democratic government instead of just abandoning them. So it feels like the situation that happened in Partition keeps happening in smaller or bigger waves throughout the world. And it feels like people are just not learning these lessons, which I find very upsetting,” she said.

The name Moth came from a very unprecedented event in Razak’s life. There had been a moth infestation in her flat on her beloved pashmina scarves collected from India over the years of travel. “I picked one up and it just crumpled into dust in front of me. And it was really that feeling of it falling apart that made me think of the situation and Partition,” she said. She also remembers Jinnah’s words where he compared Pakistan to a moth-eaten country with separate parts in separate places. This was an image Razak couldn’t get out of her mind.

And as a final connecting link, she likened Maa’s character to that of a moth flying towards the bright candle, only to get burned.

“She was almost too advanced for her age, too intelligent, too liberal, and she was always going to be punished for just being 100 years too early. She was going to get burnt. Because there was no society to help hold a woman like her at that point in time,” she said.

Moth takes you by surprise. It’s a slow-burner that grips you with gentle hands. Razak is already editing her second novel and we can’t wait to see what she has to offer next. She is currently reading In the Dream House by Carmen Maria Machado and Summerwater by Sarah Moss.