Advertisement
Home / Culture / Bob-dylan-at-80 / When Bob Dylan takes the stage, the world hopes to be one again

When Bob Dylan takes the stage, the world hopes to be one again

Shadow Kingdom: The Tambourine Man will be streaming; what’ll he sing, and what does this mean for a people on edge? 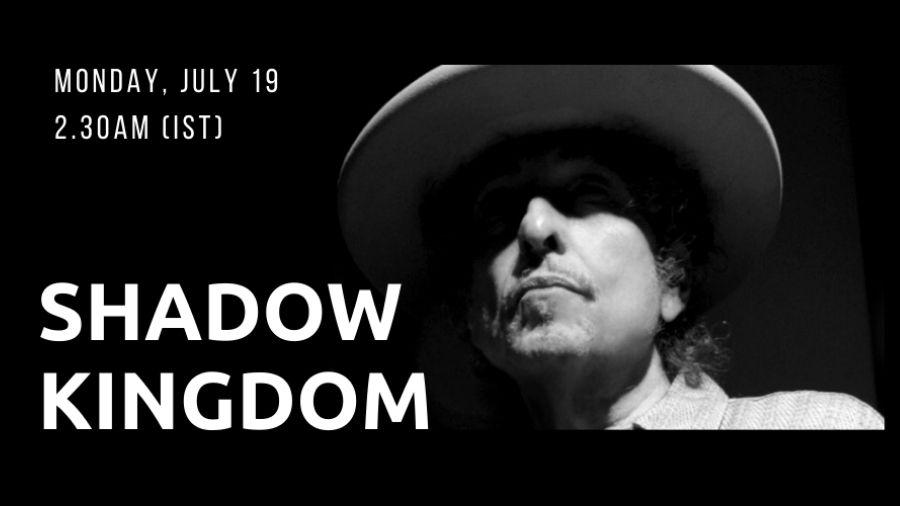 All the world’s a stage. Indeed.

Days from now, life’s many prosceniums will morph into one. And Bob Dylan will be on it, in our living rooms. July 18 (July 19 for India) promises to be an exciting moment for music fans no doubt, but this first ever broadcast show from the Tambourine Man after his 1995 MTV Unplugged is dizzyingly delightful for Dylan fans across the world, especially for those living outside the privileged circle of venues his Never Ending Tour of live gigs has pit-stopped so far.

Or maybe not. With Dylan you never really know. Will it be a live stream or pre-recorded? What songs will he sing? Will he talk in-between, acknowledge the disembodied presence of millions of those eagerly waiting, logged in with their smart gadgets in the hope of seeing heaven’s doors open.

Never mind. Let’s stay fixated on what we know. The past year has been the longest hiatus Dylan has ever taken from live performances since the beginning of his Never Ending Tour in 1998. He did not appear for a single show last year. The internet broadcast, therefore, is a fresh start. A reboot, accessible to all across the pandemic-hit world for the princely sum of $25 a ticket. Hence, that lonesome Bengali boy who was taught to sing Blowing in the Wind in Class III just has the very real possibility of attending a Zimmerman concert.

Aside from all the myriad meanings this performance, enigmatically titled Shadow Kingdom, holds for all of us struggling to emerge from this time of multiple insecurities, the fact that the most iconic singer-songwriter of the time has chosen to embrace the virtual to bring home to us the very real experience of a live concert is staggering in import. The octogenarian rockstar_ his last birthday was two months ago _ who never stops reinventing himself has now opted for the most preferred mode of reaching out, his endorsement of a streaming service a much-needed encouragement for grounded performers the world over. The times they are a-changin’, he said. And he’s been there all through the way.

A 30-second trailer gives us a peep into what we might expect from Shadow Kingdom. Shared across his social media handles, the black and white video shows him performing his 1971 bluesy foot-tapper, Watching the River Flow, at an undisclosed venue with a band, all of them wearing mandatory masks, and a scattered bunch of people as audience. “Early songs of Bob Dylan” is captioned early on in the trailer. Is it that he’s going to do those and not selections from his most recent 2020 album, Rough and Rowdy Ways, which he hasn’t played in a live setting?

“All I know about it is what everyone else knows: that he's putting together a show,” says Joel Madden, the 42-year-old co-founder of livestreaming platform Veeps that is hosting the show but clarifies there’ll be renditions of songs from 2020’s Rough and Rowdy Ways too.

That settles it. A Dylan song, no matter when you hear it, speaks to us in the moment.

And as long as it does I’ll just sit here

And watch the river flow

Leon Russel, bless his soul, was on piano in the original. It was only in the late seventies that Watching the River Flow started to feature intermittently in his live shows. It reappeared again about a decade later while he was playing with the Grateful Dead. The last time he’s performed it live, notes Rolling Stone magazine, was on July 15, 2014 in Gothenburg, Sweden.

“The song is like a painting, you can’t see it all at once if you’re standing too close,” he told New York Times last year which is perhaps just the thing to do while approaching the tunes in Rough And Rowdy Ways.

A no-holds-barred paean to life, RARW is a sweeping panorama of history and culture, philosophy and its many contradictions, love and hate, an assortment of body parts thrown in for good measure. It is Dylan’s Ulysses on Instagram in slow motion. You see pictures and paintings in your mind’s eye, you hear ruminations of death amid the slow burn of slide guitars and muted drums.

Yet, just as Jacques circumnavigates the seven stages of life in his monologue on “The Stage” and we feel he has made sense of it all, Dylan confesses: I’ve Made Up My Mind to Give Myself To You. There was a time when it was Not Dark Yet, even when the depths of despair seemed like an infinite abyss. Now, it is about devotion to ideas and ideals; to truth distilled of all lies and falsehoods; to love amid the looming shadow of death. To each his own, though. As You Like It.

I presume these thoughts, all woven to tunes sung/spoken in the backdrop of tempered piano tones (Fiona Apple, among others), exquisite guitar triads (Charlie Sexton) and accordion flourishes bound by some low-end percussive understatements, will be articulated in a manner quite different from the parent album. Dylan is known to harbour multiple versions of his songs _ he contains multitudes, remember?  Think of the many ways he has celebrated “them charcoal gypsy maidens” known to “strut their feathers well”. Or the slow train that suddenly takes on a laid-back sense of urgency when Jerry Garcia and Co. were backing him up. And that “cup of coffee” that never seems to turn cold in the many ways he chooses to brew its ingredients?

Art is the only way to run away without leaving home. Dancer choreographer Twyla Thorpe’s timeless observation acquires multitudinous dimensions in the present-day context. The coming Dylan concert cements that thought, more so with his own admission. I sing songs of experience, he says, borrowing from William Blake. And experience is all we have with death as culmination.

Having watched the river flow for so long, Dylan hints he’s arrived at a conclusion, some sort of a closure may be. Our hearts are like a river, he says, sometimes it takes a while to realise things. But we keep trying.

It looks at nothing, neither near or far

No one ever told me, it’s just something I knew

I’ve made up my mind to give myself to you.

All the world’s a stage. Indeed. And Bob Dylan is on it.

Songs of our time