Advertisement
Home / Culture / At his mysterious best, Bob Dylan shines in the shadows

At his mysterious best, Bob Dylan shines in the shadows

His first broadcast since MTV 1995, Shadow Kingdom was concert noir if ever there was such a genre; mysterious, melodic, at times melancholy _ yet stunning all the way 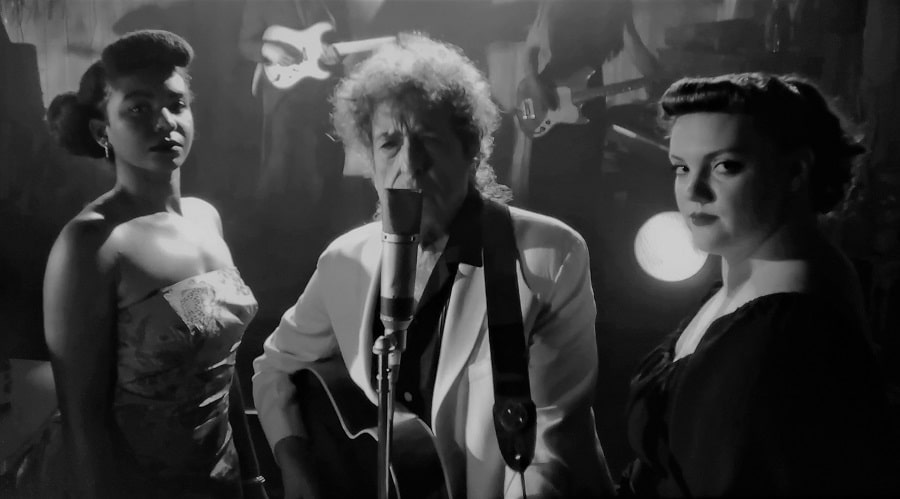 Masked men in black hats play the mandolin, accordion and guitar. A lone woman, her face under cover too, handles the upright bass. They are huddled together at the rear, forming a protective arc around the man. Bob Dylan is singing. He is sounding good. Very good. He’s at a smoky café with men and women; it’s all black and white, but not quite. Light and shade. Grey, steel grey, a burst of a blinding spotlight. It’s gone!

This is concert noir if ever there was such a genre. Mysterious, melodic, at times melancholy. Yet stunning all the way. Beautiful.

Dylan’s first broadcast since MTV 1995, surprises and how. Opening with When I Paint My Masterpiece, a song that is the cornerstone of all artistic ambitions, is almost unrecognisable at start. Yet it manages to lead the way into an hour’s exposition of his back catalogue, the early songs of the “song and dance man” that get a makeover befitting the occasion.

Most of us, presumably, are at our homes, riding a pandemic; looking for a change, solace may be. It comes many a-times during the hour-long streaming show that many concluded was a bit too short. I was only on my fourth beer, wrote someone on the chatbox, replete with one-liners from an audience that had logged in from the far corners of the world spanning multiple time-zones. They all wanted to see and hear Bob. They did. For that one hour the world was one.

What Was It You Wanted, from his 1989 album Oh Mercy, was as recent as he would get in a set-list that showcased songs from the 60s and early 70s. The seductive staccato charm of the original was reworked _very low-key with subdued harmonica, a haunting refrain of the guitar adding to its mystic charm. Its many posers summed up the mood. None of us was sure what Shadow Kingdom was all about. We thought about it, harboured expectations, all along not quite sure of anything. All we knew was that the man would be there and would sing for us. He did.

So, “what was it you wanted”, he asked, fists held tight, bringing his arms down gently but definitively to the beat of the music. Wicked Messenger, its sprightly and avant-garde intonations intact, was another highlight, the guitar’s mischievous twang leading the way and coming back to tease.  His new band was pitch-perfect, always careful not to over-play and stay true to the Rough and Rowdy Ways template wherein all the songs are sung like story poems in the backdrop of brooding instrumentation.

Shadow Kingdom was as intimate as it gets with Dylan and the band captured in tight frames by an unobtrusive camera that seemed to be quite in awe of the music and musicians, at times even hesitating to get too close. Shadows play their part, naturally, as the audience does its bit drinking and smoking with gay abandon. Someone walks across, just as you would in a crowded bar, blocking the stars momentarily; at times, the lead guitarist is upfront in our face and doing his thing, as though a crooner serenading a beautiful woman at the table.

The sound was excellent; crisp, sans frills. If streaming is this good, it’s bound to have a future.

Shadow Kingdom did not rock. It took us places gently, from the comfort of our homes. Dylan signed off, aptly, with Baby Blue. Not many were prepared to let him go when he sang the words, “it’s all over baby blue…” After all, he was on song, regular wardrobe changes and Elvis boots et al. It was his touching rendition of Forever Young though that said it all. He sang his heart out, the sublime interpretation heightening a sense of poignancy likely to stay embedded in our hearts -- well, forever? Here was this boy from Hibbing, Minnesota, whose school yearbook lists his single-minded ambition as joining Little Richard, singing to us, and wishing us well. God knows we need it.

May your hands always be busy

May your feet always be swift

May you have a strong foundation

When the winds of changes shift

May your heart always be joyful

May your song always be sung

And may you stay forever young.

Dylan with his band, a new band
TTOnline

What was it you wanted?
TTOnline