Advertisement
Home / Culture / Arts / We had to do something to bring back the middle class into the fold of art: Rakhi Sarkar

We had to do something to bring back the middle class into the fold of art: Rakhi Sarkar 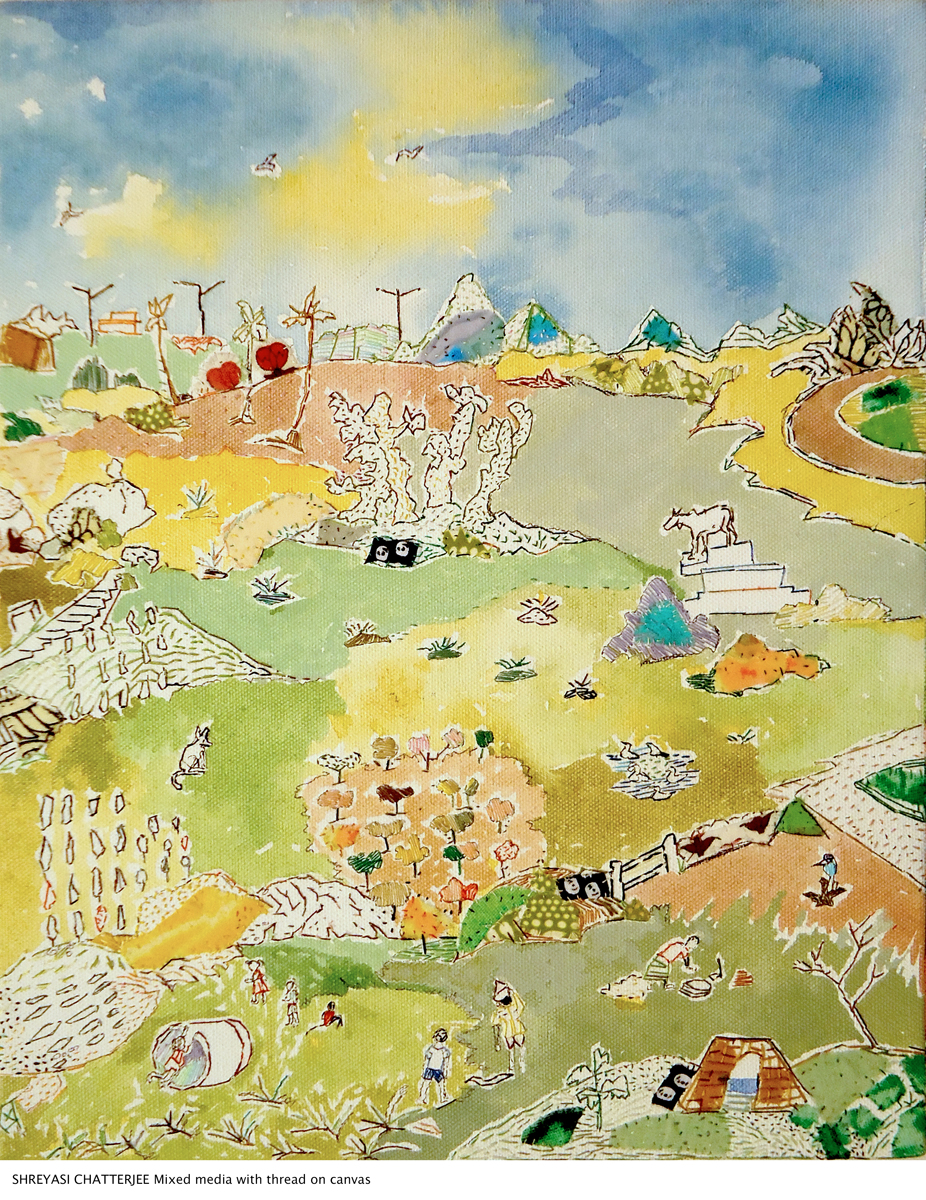 How did CIMA start?

In 1986 I curated an exhibition called Visions, as the president of the ladies wing of the Indian Chamber of Commerce. It had 200 artworks and was the first major show to be done in Calcutta. While I had been an art collector, this was my first experience of curating a show. The exhibition had a tremendous impact and afterwards several artists came to me and said they needed promotion and why didn't I open an art centre.

I told them that I couldn't start a gallery overnight. I had to learn more about art establishments. So for the next few years I researched the subject and started CIMA in 1992. It was an informal opening in a little apartment while our gallery was getting ready. But in December 1992 the Babri Masjid demolition and riots happened. We were involved in relief work in Calcutta, after which we went to Shantiniketan where Somnath Hore and several other artists came to me and said that they wanted me to hold an exhibition as all the artists wanted to protest against what had happened.

So in January 1993, I curated an exhibition called Wounds. We knew Husain sahab, and with help from him and many others, we got in touch with people across India. We had over a 100 artists who participated in the exhibition. For instance, Souza was abroad but he designated a work from a particular collection to be displayed at the exhibition.

A lot of the works came from private collections, and Wounds was executed.

And with that CIMA embarked on this journey.

Could you tell us about the very first Art Mela?

We started in a very small way in 2008. But there was a lot of excitement among art lovers. Our staff went to the exhibition space around 8am to open the place for the exhibition which was scheduled to start at 11am. But there was already a small queue. These were simple people, not the la-di-da chatterati crowd. There was a retired school teacher who had borrowed money from his provident fund to buy a Ganesh Pyne. He had been waiting since 5am for the gates to open. That whole venture was about such stories. The media highlighted such stories, we didn't know about them.

But when we read about these stories, we were moved. The first Art Mela had around 20 artists and 200-300 art works. Most were senior artists and some were modernists.

How does the Art Mela work?

For the Art Mela, we select the artists but not the works. The works are all sent by the artists, we don't have a say in that. The idea is that you are bringing young collectors and young artists together. Of course, big names are necessary because they attract the crowds. But to be very honest, big names give limited works. Even if you have 10-15 big names, how many artworks will you get from them? Most of the artworks are coming via younger, emerging artists and the bulk sales also happen of their work.

We don't give more than one artwork of any of the big artists to one person. The idea is to spread it around. We try and keep away dealers.

All the works are authenticated and stamped. You can keep your receipt. If ever you want to sell, you can show that receipt.

For the Art Mela artists make special works. Normally most of the work of these artists is very angst-ridden. An average collector may not be able to live with it. A first-timer may find their art too dark. Once you understand the artist and get into it then you can look at buying a very difficult piece which may seem very angst-ridden.

The senior artists also have to look out for their market prices so they do special works for the Mela. He/she can experiment. Some, such as Paresh Maity, make small format work for us. Some work with a different medium. They use the Art Mela as an ongoing study. So we get a lot of playful, unusual works.

It is a dilemma for the art world. As prices shoot through the roof how can potential middle-class art lovers be drawn into appreciating and buying art without breaking the bank. That was the question Rakhi Sarkar, the founder of the Centre of International Modern Art (CIMA), Calcutta, asked herself. The result was the Art Mela that acts as a link between artists and the middle class by offering quality works of art at affordable prices. Now in its 11th year, it comes to Delhi for the second edition from April 12-16th.

Telegraph Online caught up with Sarkar to talk about CIMA, the Art Mela and making art affordable. Excerpts:

What was the chief idea behind CIMA? What did you want to focus on?

Frankly speaking we were a gallery that concentrated on art history because we felt that the narrative of Modern and Contemporary Indian art was not documented. A cohesive narrative has yet not emerged.

We have snippets of South India, Baroda, Bengal etc. But we don't have one single narrative.

So from the beginning we had decided that CIMA had to do this. Now for the past 25 years we have managed to document a large chunk of art history, especially from the Bengal region. But we still have a long way to go.

How did the Art Mela come about?

Over the years we also became a little snobbish. We went into this very serious activity of historical documenting of art. Everything was around that. We neglected the middle class and the masses to be very honest.

Across the world also people were debating whether we were putting contemporary art on a pedestal and alienating the masses from it. We were talking about such theoretical aspects that the average person who is not an art historian could not relate with. As a result, they were just not excited enough to go for an exhibition.

In the 19th century the patrons of art used to be the wealthy rajas and the zamindaars. But in the 20th century it was the educated middle class, the intelligentsia which supported art, right from Tagore's time. That happened till the 1990s. Even from our gallery works were bought by senior corporate executives, as art prices were more affordable then.

But come this millennium with the boom, art prices escalated and the middle class was completely wiped out.

Then people started to visit galleries with lists. They were investors and not necessarily art lovers. It was being bought to adorn corporate boardrooms but was vanishing from the public domain.

If people who are passionate about art stop talking about it, it gets forgotten. We felt that it could happen if discussion was restricted to how expensive a piece of art is. People were no longer excited. The moment they couldn't buy, their interest started flagging.

This worried us so we talked to senior artists in Bengal like Ganesh Pyne and Jogen Chowdhury. They were also very concerned and we felt we had to do something about bringing back the middle class and the upper middle class into the fold of art. That's how we came up with the idea of the Art Mela. It's genuine, first-quality art sold at affordable prices.

Why should one buy from the Art Mela?

What we are guaranteeing is that whatever it is you are buying is all getting selected by some of the finest experts. Most of the artists are CIMA Award winners. These winners are selected by a jury comprising the likes of Arpita Sen, Jogen Chowdhury, leading art historians, authors, etc. So the artists have been screened and whatever you are picking up is first rate art.

We also have a lot of folk art. We have art from Orissa, Madhya Pradesh, from Madhubani and Bengal.

And we have some top artists including Arpita Singh, Rabin Mondal, Manu Parekh, JogenChowdhury, Paresh Maity and several others.

Prices range between Rs 5,000 and Rs 75,000. Whoever has whatever budget we have something for you. And we are guaranteeing first rate quality.

Are you planning to take the Art Mela to other cities?

Which are the artists would you suggest one look out for at the Art Mela?

We have selected each of the artists so our loyalties lie with each one of them. It will depend upon what kind of work you like. We have the works of Harendra Kumar Kushwaha, he works with woven paper. Very intricate process. He was the CIMA Award winner in 2017.

Then there is Prashant Shashikant Patil who won the award this year. He does installations but for the Art Mela he has sent us beautiful line drawings. Also, there's Sandip Roy who is a very gifted water colourist. Chandrima Roy is one of our highest selling artists. She hasn't had too many gallery shows. She participates every year. Her artworks are vivid and very reasonably priced. Even some of the artists buy her work.

I like art. It makes me happy: Sharmila Tagore