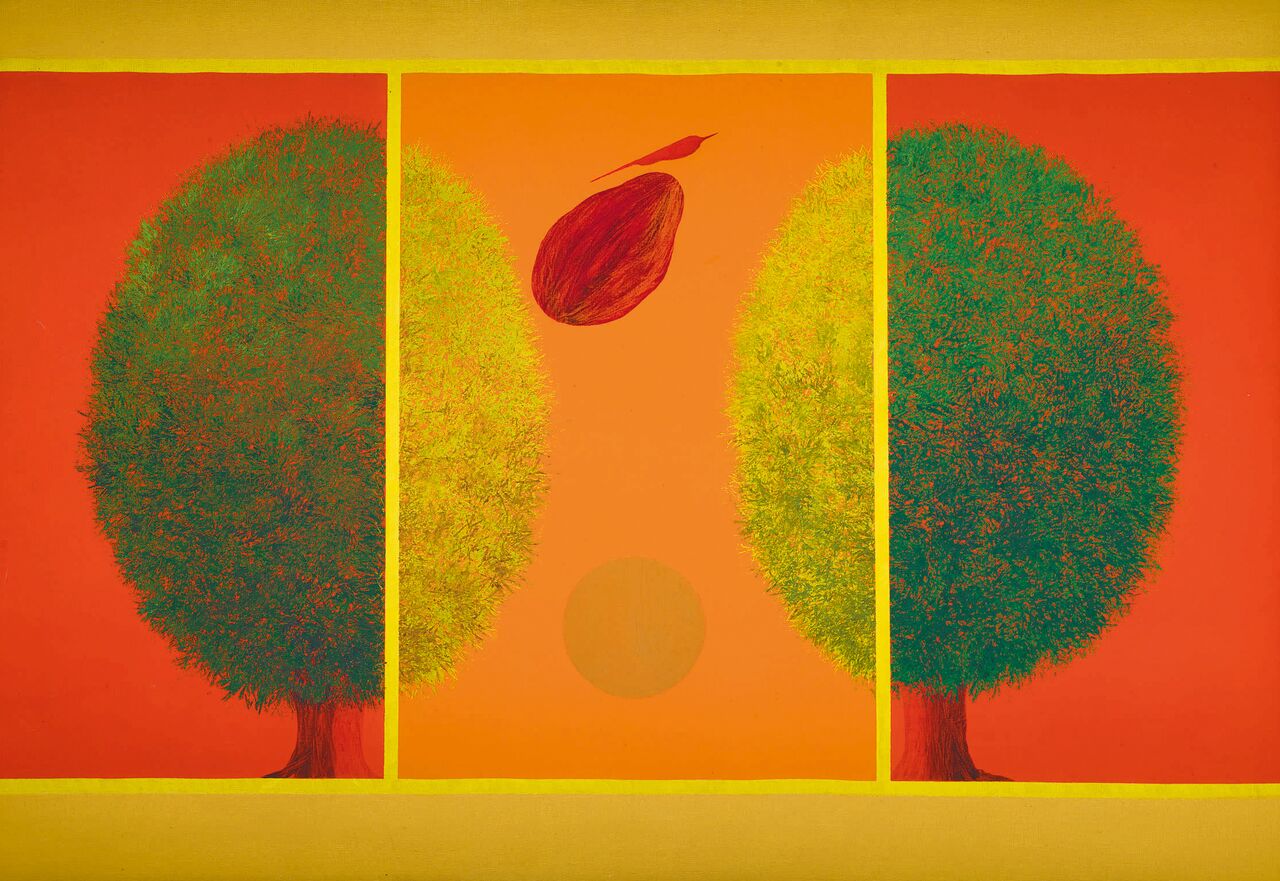 At Sotheby's upcoming sale of Modern and Contemporary South Asian Art to be held in New York on March 18th, 93 paintings representing 56 artists will go under the hammer. This is a major leap from last year when around 70 lots were sold. Says Anuradha Ghosh-Mazumdar, Head of Department, India and Southeast Asian Art, New York, Sotheby's, 'Having 56 artists is quite a record for us as well.' The artists include FN Souza, MF Husain, SH Raza, Jagdish Swaminathan, Ram Kumar, Jogen Chowdhury, Jamini Roy, Zainul Abedin, among others.

This untitled painting from 1981 was created on the cusp of Raza's progression towards formal geometric compositions dominated by their colour and shape. He started to use more earthy tones instead of his earlier brightly painted compositions, as evident in this painting. 'This is from a time when he was moving from abstraction to his last phase, which was geometric. This is mostly very abstractive but we are seeing the beginnings of the geometric phase,' says Mazumdar.

This painting has a known exhibition history. It was originally sold by Galleri Koloritten in Norway. Raza held his first exhibition in Norway at this gallery and then continued to exhibit there for over a decade. The painting has been in various private collections.

As a child FN Souza suffered from a serious attack of smallpox and his Catholic mother vowed that if he ever survived she would enrol her son in the Jesuit priesthood. Although Souza never became a priest, the Roman Catholic church in Goa gave him his first ideas about images and religious imagery remained a powerful source of inspiration for him throughout his artistic career.

Golgotha in Goa was completed in 1948, a year after Souza founded the Progressive Artists Group. This is Souza's interpretation of the Golgotha church in Jerusalem where Christ is believed to have been buried. Souza has created this in the manner of a stained glass mosaic, with its bright, kaleidoscopic palette and composition recalling the altars and shrines dotting the Konkani landscape. This painting was in Souza's fourth solo exhibition in 1948 in Mumbai. 'The Times of India's art critic at the time, Rudy Von Laden, who was a supporter of the Progressive Artists Group, said that Souza has not only created this painting in the manner of stained glass but he also seems to be referencing Indian miniatures. That's very interesting because we know that in 1947, post Independence, Husain and Souza came to Delhi and they went to the National Museum to see miniature paintings. So you see the combination of so many of these elements coming together,' explains Mazumdar.

Souza soon emigrated to London and there his style evolved towards classic Cubism. Throughout his life, Goa remained close to his heart. He retained this painting in his personal collection until shortly before his death. It was acquired from him in 1999 by a private collector, a fellow Goan. The painting is coming into the market for sale for the first time.

This painting is from a series of works that M F Husain produced in the 1950s and 1960s where he placed an importance on nature and depiction of the rural idyll. This was driven by a post-independence concern of finding a new national identity.

Elephants appear in a number of Husain's works from this period and this is in part derived from his interest in the classical arts, namely sculpture and its depiction of the elephant God, Ganesha. Elephants have had a long association with India, as symbols of strength, nobility and grace.

In the present work Husain has used heavy impasto and thick gestural brushstrokes to emphasise the elephants and surrounding figures. He also uses colour to divide the picture plane into areas of light and dark.

In The Grey Vase, executed in 1976, the flower vase is situated midway between two cropped figures of a man and a woman. It is a very significant work because it is the only one of its kind that uses centrally cropped figures. Says Mazumdar, 'In this painting we see a man and a woman holding hands but the artist has very interestingly split them into halves to show that two halves make a whole.' Many experts consider the 1970s as one of Jogen Chowdhury's most creative periods. 'You can see that there is immense control in how these lines have been drawn. Very careful use of colour,' says Mazumdar. She adds that the artist himself is very excited that this painting is coming up for sale because he hasn't seen it in a long time.

The horse was a powerful motif in Husain's oeuvre. He kept returning to this subject matter throughout his life and his animals are depicted as strong, free-willed and valiant creatures, as seen in this painting. In an interview, Husain said 'I see them as ageless and immortal'.

Husain's fascination with horses began at an early age when his grandfather used to take him to the local farrier and he would encounter these graceful creatures. He also came across depictions of the horses at age 15, when during Muharram, Muslims would carry tazias of Prophet Imam Husain's faithful horse in a procession through the streets.

'This fascination was further impacted by two trips. One to Italy in 1951 where he discovered the equestrian sculptures of the Italian sculptor Marino Marini. The second was to China in 1953 where Husain studied Tang Pottery horses,' explains Mazumdar.

In this painting Husain has used thick red and black impasto outlines to create a sense of power and movement.

This portrait is from a very early period in George Keyt's oeuvre, before he embraced modernism and started to paint and draw in his signature abstract and cubist manner. The subjects in Keyt's very early works were more modest and usually clothed but this voluptuous nude signals a transition from traditional themes to his later, less inhibited portrayals of women.

Painted in 1931, this work also shows the influence of artists such as Georges Braque and Pablo Picasso, who combined sharp lines with volume and curves. 'This is a rare painting and is coming up for auction for the first time,' says Mazumdar.

Ram Kumar's Two Figures, a semi-abstracted work from the late 1950s is demonstrative of the artist's early experimentation with figuration. 'This is the time when he starts to move away from figuration to abstraction. This painting falls right into the cusp of that,' says Mazumdar. In works from this period while the muted earth-tone colour palette remains familiar, gone are the once recognisable characters. 'After this he moves completely into abstraction and you cannot make out the figures. It is very difficult to find figurative works from him because after 1961 he didn't do any figures,' says Mazumdar.

Unlike his peers who were influenced by western art history and western subject matter, Husain chose to paint classical Indian themes and subject matter, reworking them into his own style.

In 1960 he made a trip to Banares with Ram Kumar. They spent time painting by its ghats. Deeply influenced by its temples, ghats and pilgrims, both Husain and Ram Kumar went on to create multiple works inspired by the ancient city.

This painting depicts bathers in the holy waters. Husain paints this ritual using his customary modern panache. The river is denoted by a thick single line. Husain uses subtle tones of yellow, green, white and brown. The compositional structures of the bathers and the cow are rendered geometrically.

Between 1956 and 1961, M F Husain travelled extensively and his paintings reflected what he learned and saw on his travels to the east. The painting titled He and She depicts two nude figures painted perpendicular to each other. The figures though softly fleshed are straight and rigid and the colours muted. The brown vertical of the woman's standing figure is cut in the middle by the dark horizontal of the man lying behind her. Says Mazumdar: 'This painting was influenced by Husain's visits to Japan. Husain is known for colours. But here, there is a white background and very muted colours. Besides the man and the woman, there is a weak sun. The collapsed male figure is Husain's expression of the atomic bomb blast in Hiroshima. He has likened the collapse of the atom to the collapse of humankind. The sun is wiped out. It's depicted as just this black line. It's a very unusual painting. Very unlike Husain.'