Art history is global, so are Sikh swords

Director of Courtauld Institute on opening out to the world 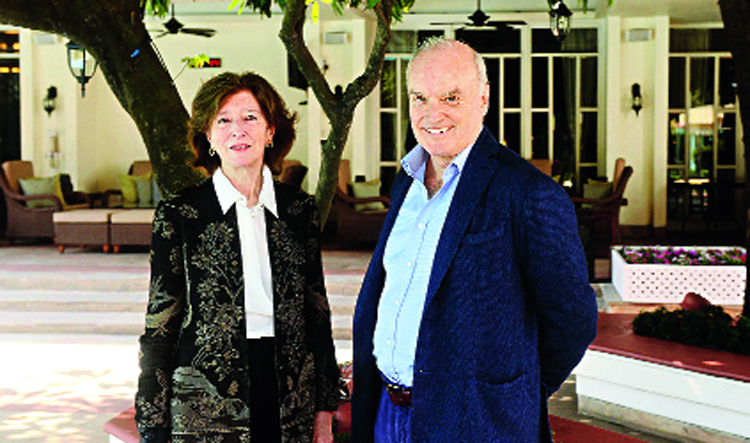 Deborah Swallow and Nicholas Coleridge discussed, among other things, a Sikh sword that was used for beheading and was picked up by Coleridge at an auction that both had attended.
Picture by Bishwarup Dutta
Chandrima S. Bhattacharya   |   Calcutta   |   Published 06.02.19, 03:09 PM

“Look who we have here! The collector of Sikh swords!”

That is how Deborah Swallow is greeted by Nicholas Coleridge as they meet for breakfast at the coffee shop of a five-star hotel. Swallow, director of the Courtauld Institute of Art, London, was in the city with Coleridge, chairman of the Condé Nast group of magazines, to attend the CIMA Awards Show 2019 on Saturday evening.

It is difficult to imagine Swallow in the company of Sikh swords. She is soft-spoken and elegant and her face is lit up with smiles, but then appearances do not often say much.

Swallow, who has since 2004 been heading The Courtauld, one of the world’s most prestigious institutions for the study of the history of art and conservation, has spent a lot of her time with Sikh weapons.

Her institution also has the reputation of contributing a disproportionately large number of directors to major museums across the world, considering the small size of its alumni. Swallow takes an active role in perpetuating this tradition.

She has been coming to India since she had just become a graduate, to teach and to research. India is her subject. At The Courtauld, she has been encouraging the institution’s engagement with Indian and other Asian art, with their cultural heritage and with global art history.

In that sense, her journeys to India anticipated the West’s growing interest in Indian art, especially contemporary art.

She visited India first in 1969, just after her graduation in English literature from Cambridge University. “I wanted to be in Voluntary Service Overseas,” says Swallow.

She was sent to Utkal University, Bhubaneswar, to teach English literature, but was not able to teach much. Her accent was a problem. “And I had arrived in the middle of a cyclone.”

She would return later. Back home, the India story continued. She was curator and teacher at the Cambridge University Museum of Archaeology and Anthropology. From 1983, she worked at the Victoria and Albert Museum (V&A), where she was appointed the Keeper of the Asian Department and Director of Collections.

Swallow oversaw the creation of the Nehru Gallery of Art and exhibitions on the arts from different South Asian regions. She set up the Nehru Trust for the Indian Collections at the V&A in New Delhi and built relationships with the UK’s South Asian communities and with Indian institutions. “Art history is global,” she stresses.

At The Courtauld, her main job is two-fold. “To see that the institution is financially sustainable” and that its scope remains global. Her institution is sustained to a great extent by philanthropic support, she says.

There she is also involved in an activity that is not a part of her official job description: infiltrating the top of the world’s museums. “We see to it that museum world is peopled by our alumni,” says Swallow. It’s a hidden mafia.

She agrees that not many good exhibitions travel to this part of the world. One reason is the logistics. “Exhibitions need the support of institutions. Those who do not know the subcontinent may show a certain reticence about infrastructure.”

Besides, there is the value of the artworks. The Courtauld has holdings of art from several parts of the world, including from Asia, and from the classical to the contemporary. The value of the European collections alone runs to billions. The material value of the works and their safety can cause anxiety to a museum if an exhibition has to travel.

But the doors are always open to the world. Two of her recent PhD students have worked on Buddhist art and contemporary Indian art. The institution boasts of a significant number of students of South Asian background and a strong focus on the global. A recent survey at the institution revealed that the students want the curriculum to open out more.

Swallow’s research interests are Indian modern and contemporary art, Indian textile and craft production and Indian museums and their histories. She has written books on the Indian garment industry, the Asian collections at V&A, the Indian textile trade during colonial times, colonial architecture in India, Lord Curzon’s ivory chairs and the arts of the Sikh kingdoms.

That is why she was attending the auction where the Sikh sword was up for grabs. It had been used for beheading. But Coleridge snatched it away.

A first-time collector's guide to the India Art Fair 2019