Advertisement
Home / Culture / A vacation in Wayanad without RaGa

A vacation in Wayanad without RaGa

Off to Wayanad, I announced. Wayal Nadu in Malayalam means the land of paddy fields. “A very traditional town; carry a couple of saris,” advised a friend. “And get yourself a pair of gumboots, too,” he added. Another directed me to a sports goods outlet for the ideal footwear that could see me through the treks and, of course, a quality raincoat.

The deluge of tips was triggered by the footnote to my message — I would be attending a monsoon event, Splash. This annual carnival is organised by the Wayanad Tourism Organisation with support from the Government of Kerala and the state tourism department. The last and cheekiest response came a couple of hours before my flight, “But Rahul Gandhi isn’t there now.”

I had no way of knowing this then but absences became the refrain of the trip.

The flight was delayed by an hour. The weather must be bad, suggested a colleague on WhatsApp. From the cool confines of the airport, I could see Calcutta being her usual sweltering self — those on the tarmac could hardly keep their cuffs off their brows.

I was at the airport exactly two hours before the scheduled departure time. Not because I am manic punctual, neither was I trying to avoid any delay caused by the closure of a flyover a day ago. I merely wanted to catch up with a cousin posted at the airport. (Talk about flighty connections!) As it turned out, he wasn’t there — miscommunication, date mix-up.

In any case, two flights and an hour’s delay later I was finally in Kozhikode. Monsoon had officially reached Kerala a month before me. I strode out of the airport with waterproof covers for my luggage and the self. “Splash?” asked a youngster from a group standing near a Tempo Traveller. I nodded in affirmation, stifling the urge to remark on the absence of puddles. The road was not even damp.

As I was pondering over whether morning really shows the day (it was just past midnight actually), we were bundled into the waiting wheels for Kalpetta, the district headquarters of Wayanad, some three hours from the airport. As the road snaked through the hilly terrain, it drizzled pitiably. I was reminded of a Tagore song —

Esechhile tobu asho nai janaye gele. Meaning: You were there but not wholly as you let it be known. Absences. Non-presences. As I looked out of the car window I saw nothing but darkness, broken at times by flashes of passing vehicles.

I wondered how the mud football tournament would play out. Something we didn’t get to attend in spite of it being on the itinerary. We stopped to see the bamboo project, Uravu, in Thrikaipetta village. Basically, efforts of a women’s self-help group. A young girl just out of college, who was in charge of the showroom, told us we could see, click and buy to our hearts’ content — blinds, trays, spoons and ladles, lampshades, masks, hats, curios — at the event venue, where they too had a stall. When we got there, however, we were greeted by the sight of the stalls being dismantled.

The only consolation was the promise of a traditional Kerala lunch with a local family. But that too turned out to be fish-less, beef-less. Absences, the dry script was unrelenting. “You ate vegetarian fare? Why did you go to Kerala then?” wrote a colleague, a particularly hungry one. I could almost hear the outrage in his voice.

Next morning we were faced with the uphill task, quite literally, of trekking up to the Edakkal Caves — two natural caves up on Ambukuthi Mala with graphic designs carved on their walls. Another absence. I couldn’t make it up the last leg of the ladder-like iron steps. I learnt later from my colleagues that only one cave is accessible.

A drive through the Wayanad Wildlife Sanctuary that evening was no different. “There are 18 tigers here,” the jeep driver told us. We spotted nada, zilch. No herds of elephants ambling along. No homeward bound birds either. Not even a stray bison or cattle for that matter. There was, instead, the experience of a jumbo chase. A lone tusker was blocking our way. As is the practice in such zones, we waited for it move on. Wasn’t a long wait but the minute the driver floored the accelerator the trumpeting elephant came charging after us. 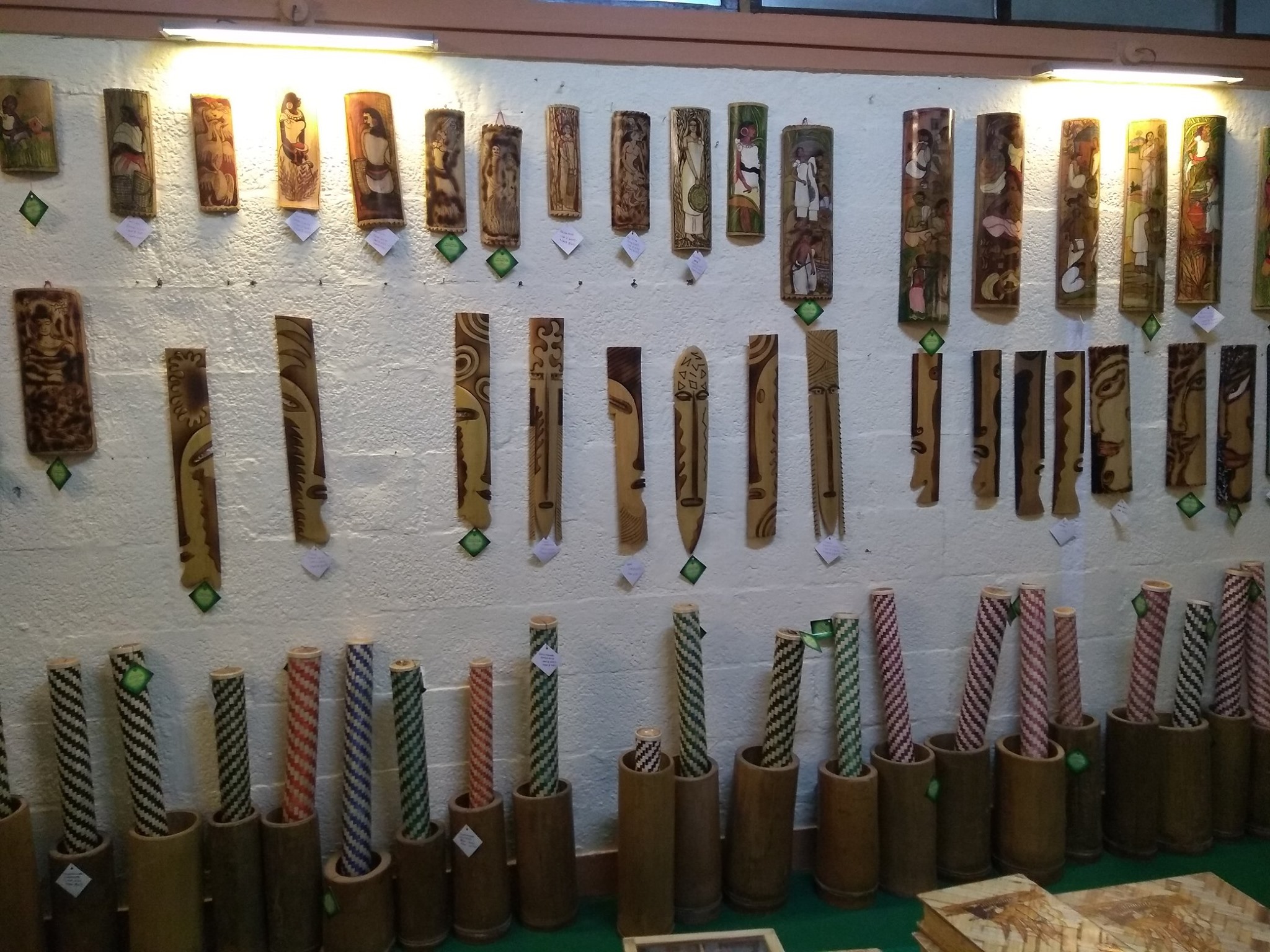 Bamboo products in Uravu, including rainmakers lined up on the floor
Swachchhasila Basu

As I packed the suitcase, the newly-acquired floral raincoat staring back at me mournfully. Whither monsoon, whither RaGa, it seemed to ask. I remembered on the way to the airport that I had not bought the “rainmaker” I had meant to, all along — a bamboo contraption that mimicked the sound of falling raindrops.

Since my trip, however, Splash has turned to surplus, a Poseidon deluge.