Smoke over tax on withdrawals 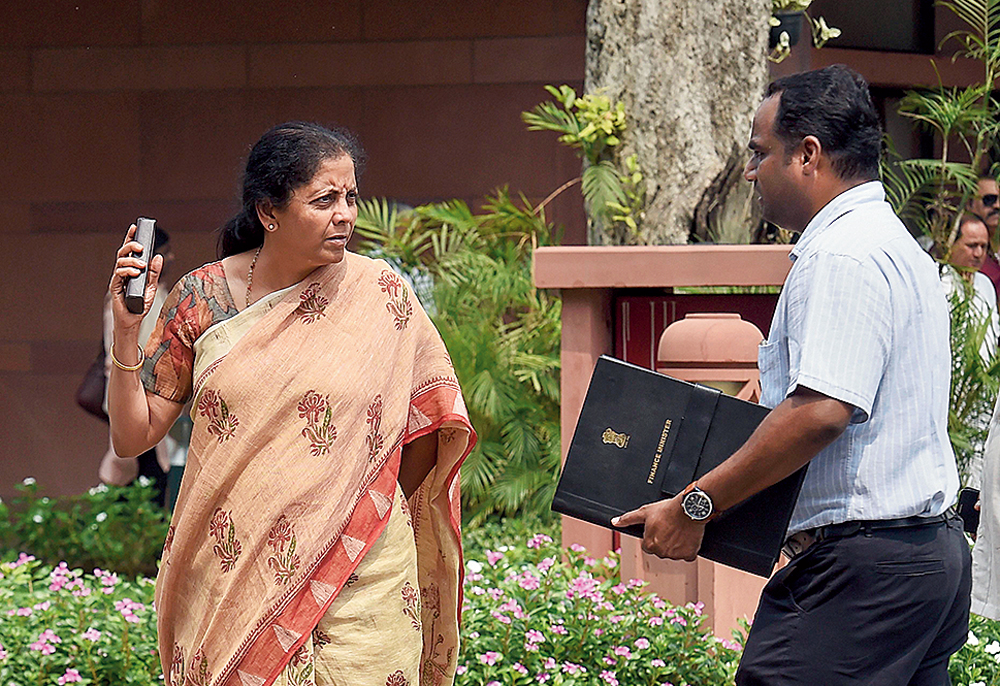 Finance minister Nirmala Sitharaman on Tuesday said the 2 per cent TDS paid on cash withdrawals above Rs 1 crore in a year from multiple accounts at banks would be adjusted against the total tax dues of taxpayers even though these would not be deemed as income in their hands.

The TDS levy was announced in the budget by Sitharaman to be effected by a change in the income-tax rules. The provision would come into effect from September 1.

Tax practitioners had questioned the legality of the levy on the ground that if the cash withdrawn wasn’t construed as “income”, how could it be taxed under the Income Tax Act.

The government imposed the levy as part of its effort to crack down on tax evasion and stop the generation of black money.

“We have had several instance of people withdrawing huge sums of money in cash and when we trace it to their account, they have not even filed income tax returns. If only they file their return, this TDS can be reconciled with the tax return. We are not saying this is over and above what you are entitled to pay,” Sitharaman said in a debate on the budget in the Rajya Sabha.

After a four-hour discussion and reply by the minister, the Appropriation (No 2) Bill, 2019, and the Finance (No 2) Bill, 2019 — cleared by the Lok Sabha last week — were returned by the Rajya Sabha on Tuesday after voice vote. This completed the three stage parliamentary approval process, which also included a debate on the general budget.

Sitharaman said the report on Direct Tax Code would be submitted on July 31 and the government was keen to reduce the compliance burden on taxpayers.

“Task Force has completed its job and in all likelihood would submit by July 31. The government will take a view and we are interested in simplifying the burden on compliance and not just the tax on him, both direct and indirect,” she said

The new direct tax code is set to replace the existing Income Tax Act. The aim is to reform the complex income tax laws into simpler tax codes, with reduced rates, fewer exemption and tax slabs.

The task force was supposed to submit its report by May 31, but the then finance minister Arun Jaitley gave a two-month extension.

The finance ministry in November last year appointed Akhilesh Ranjan, member (legislation), CBDT, as convenor of the task force after the retirement of Arbind Modi.

Sitharaman justified raising the tax on petrol and diesel by Rs 2 per litre each, saying inflation was at rock bottom and the move would not add any significant burden on prices.

Almost the entire opposition boycotted the debate, demanding that Prime Minister Narendra Modi should make a statement rebutting Donald Trum’s claim yesterday that he had asked the US President at the G-20 summit in Osaka to mediate in India’s dispute with Pakistan over Kashmir.

Sitharaman also justified the slapping of 10 per cent import duty on newsprint, which the newspaper industry has criticised as backbreaking, saying the move would give domestic paper producers a level playing field.

“Basic customs duty on newsprint has been increased to provide a level playing field to domestic manufacturers. There is a capacity in this country to produce newsprint. But unfortunately, they are not able to get buyers because most of the newsprint is imported,” she said.

In the last few months, there has been a drastic fall in price overseas from $700 per tonne to $500 per tonne, she said, adding that kind of fall in global newsprint prices has affected the Indian manufacturers so badly that they are not able to find takers for their product.