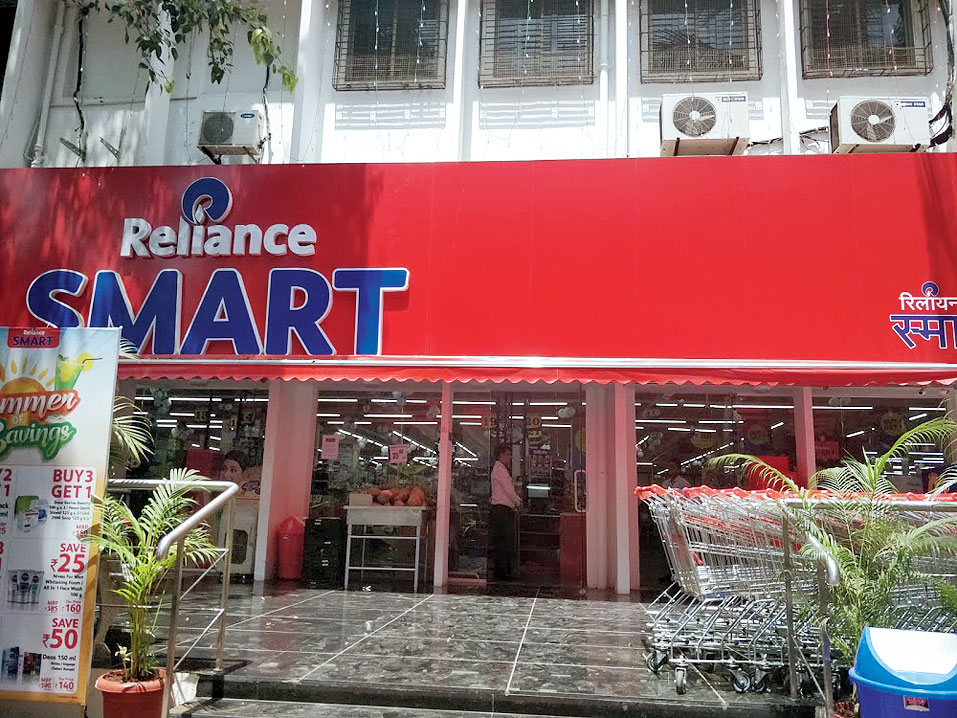 These will be small neighbourhood grocery stores. Stores to have kiosks for one to order fashion and lifestyle products online, besides Reliance Digital points of sale for ordering electronic items. Separately, RIL is bringing local stores on board for its e-commerce venture JioMart.
Sourced by The Telegraph
Our Special Correspondent   |   Mumbai   |   Published 09.02.20, 07:11 PM

Reliance Retail is expanding its grocery play as it takes on rivals such as Amazon. The organised retail arm of Reliance Industries Ltd (RIL) has opened around 18 grocery outlets, or Smart Point stores, under a new format.

After declaring the third-quarter numbers for 2019-20, RIL had said in a presentation that it has launched a concept called Smart Point which are one-stop, multi-purpose stores.

RIL had disclosed that these outlets are a smaller avatar of its Smart stores (a bigger format outlet) and will be present in the residential neighbourhood to serve the daily multi-purpose needs of consumers. These include grocery, pharmacy and assisted e-commerce.

The company has moved fast, taking less than 45 days to launch the stores after announcing the concept.

The stores will have a kiosk where a customer can order fashion and lifestyle products online, apart from a Reliance Digital point of sale where one can order electronic items.

At present, these stores are run on a pilot basis in three regions in Maharashtra.

According to a Credit Suisse report, the new stores, like the larger format, come with the same promise of a “minimum 7 per cent off on MRP” on all products.

Besides assisting the JioMart venture, these stores will function as full-fledged grocery outlets, further deepening the Reliance Retail network in the country.

In grocery, Reliance Retail has around 723 stores across 160 cities and during the third quarter of this fiscal they reported more than 61 million footfalls. At present, the consumption basket in its business is led by consumer electronics and connectivity, accounting for 32 per cent each. This is followed by grocery at 19 per cent, fashion & retail at 9 per cent and fuel retail at 8 per cent.

Reliance had started JioMart pre-registration in December 2019, which is part of its new initiative to on-board kirana stores. JioMart is its food and grocery e-commerce venture. While the initiative is at a pilot stage, including a JioMart app, the brokerage added that the app offers multiple advantages of free delivery without minimum order value, thus having an edge over current e-commerce options, an assortment of more than 50,000 grocery products, and no questions asked on return.