The central bank warns of grim prospects till year-end; there is also food factor heat on Centre 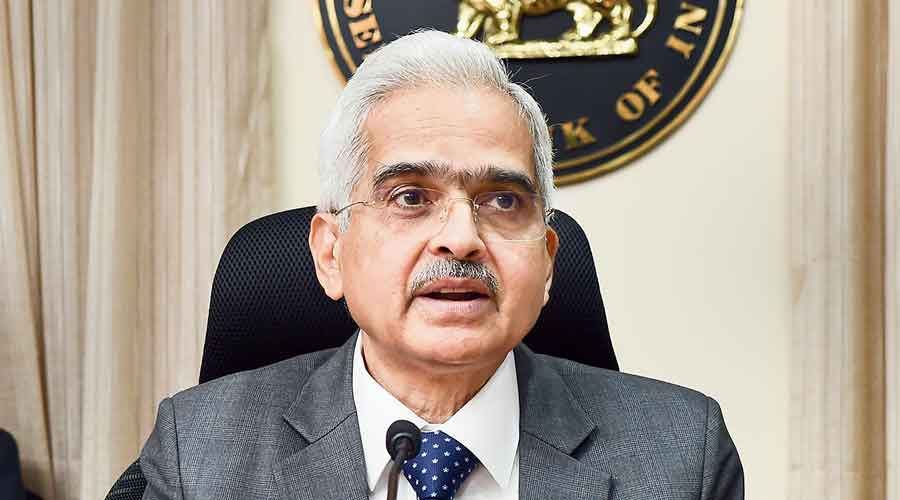 Inflation has turned into a frustrating game of whack-a-mole for the Reserve Bank of India.

On Wednesday, the policymakers on Mint Street raised the repo rate by another 50 basis points to 4.90 per cent — the second time they have done so within a month — but RBI governor Shaktikanta Das ruefully admitted that the central bank would fail to meet its mandate to keep inflation below 6 per cent this year.

The repo is the rate at which the RBI lends overnight funds to banks. It serves as the benchmark for interest rates in the country. Loans to prospective home owners, car buyers, as well as big and small businesses will now turn expensive as banks pass on the rate hike without demur.

The RBI raised its inflation forecast for the current fiscal to 6.7 per cent — a full percentage point higher than its April forecast of 5.7 per cent.

Central banks usually pick up the sledgehammer tool in its monetary policy arsenal to beat down on inflation when it becomes a persistent menace — rather like the mole that irritatingly pops up in the arcade game that children love to play in an amusement park.

In May, the RBI had raised the repo for the first time in four years by 40 basis points to 4.40 per cent.

Governor Das said that retail inflation would remain high in every quarter this fiscal: 7.5 per cent in the first quarter (April-June), 7.4 per cent in Q2 (July-September) and 6.2 per cent in Q3 (October-December) before dipping to 5.8 per cent in Q4 (January-March next year).

Inflation leapt to an eight-year high of 7.79 per cent in April — and has remained above the upper limit of 6 per cent since January.

The forecast suggests there will be no respite from inflation — not even from an illusory statistical base effect. Inflation had risen to 6.3 per cent in May last year and stayed firm at 6.26 per cent in June 2021.

Crucially, the RBI governor said: “Around 75 per cent of the increase in inflation projections can be attributed to the food group.”

This is a significant comment: it suggests that inflation has been high because of a broken food supply chain, which amplifies the pressure on the Narendra Modi government to fix it.

Ever since the RBI embraced an inflation-anchored monetary policy framework in May 2016, it is obligated to keep retail inflation based on the consumer price index (CPI) within a tolerance band of 2 to 6 per cent.

As part of the agreement with the government, the RBI must come up with a formal explanation if it fails to keep inflation below 6 per cent (or above 2 per cent) for three consecutive quarters. The RBI has clearly indicated that it will not be able to do so this year — the first time that such an admission has ever been made in a forecast — which will then force it to explain why it had dropped the ball.

That is when a muted blame game could begin between the Centre and the RBI.

This has already been foreshadowed in the comments from the RBI governor and the mandarins on Raisina Hill after Wednesday’s monetary policy.

Governor Das told reporters: “I am sure the government is mindful of the current inflation situation and it is for the government to decide on further supply-side measures which they consider as necessary.”

Ajay Seth, secretary in the department of economic affairs, said: “There cannot be any copybook solution (to controlling inflation). As new information emerges, it will be analysed and… measures will be taken.”

Seth added that the monetary and fiscal authorities would continue to act in tandem. “We (are working) to moderate inflation (and) at the same time persist with the growth efforts.”

Last month, the RBI had called the Modi government’s bluff on inflation when it carried out a sensitivity analysis that debunked the Centre’s persistent claim that a string of external factors over which it had no control – rising crude oil and commodity prices, the war in Ukraine and global supply chain disruptions – was responsible for the broad-based surge in prices across the country.

Except for edible oils, India is more or less self-sufficient in food which has a disproportionately high 45.9 per cent weightage in the CPI.

The Modi government has been under pressure to raise minimum support prices for the kharif crop as an incentive to farmers to raise farm output.

On Wednesday, the Union cabinet raised the minimum support price for kharif crops by 5 to 9 per cent, sparking fears that this would lead to a further spike in retail inflation.

The MSP for paddy, sowing of which has already begun, was increased by Rs 100 a quintal, or by 5.5 per cent over last year’s price.

“There will be an upside pressure of 15 to 20 basis points on inflation (as a result of the increase in the MSP on kharif crops),” State Bank of India’s chief economic adviser, Soumya Kanti Ghosh, said.

There remains one other worry.

The RBI’s inflation forecast is built around the assumption of a normal monsoon this year and the hope that the average price of crude (based on the Indian basket) will cool to $105 per barrel from the current level of $117.

The Met department has already forecast a normal monsoon this year with rainfall projected at 103 per cent of the long-period average.

It is the assumption on the crude oil price that could prove very wobbly as the Ukraine war continues to rage and oil producers in the Gulf refuse to open their production taps. Saudi Arabia has already raised the price of its light crude oils by over $2 a barrel for Asian buyers, including India.