CEO Vijay Shekhar Sharma, who cried with joy at the opening ceremony, later said he was unperturbed by the slide 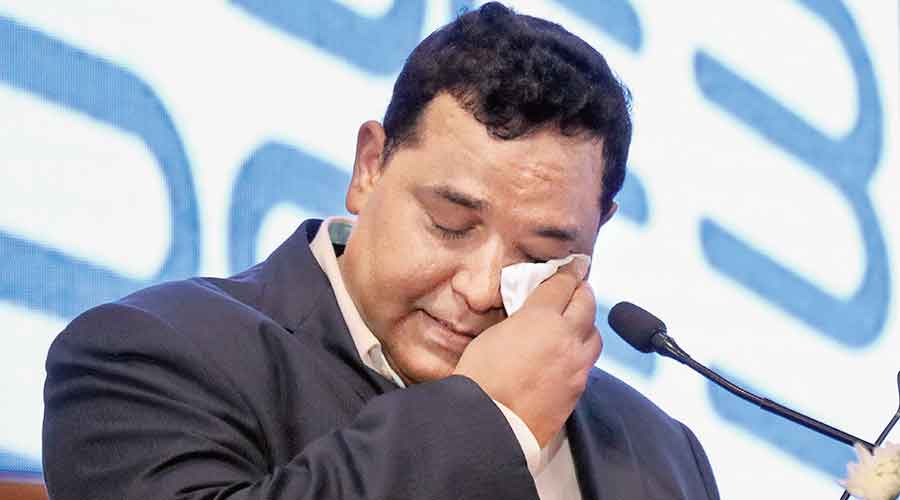 Digital payments firm Paytm made a disastrous stock market debut on Thursday as investors clobbered the scrip and gouged more than 27 per cent off its issue price amid mounting concerns over lofty valuations and the business model.

One97 Communications Ltd, the parent company of Paytm, had raised Rs 18,300 crore from the country’s largest-ever initial public offering (IPO) that had barely squeaked through because of lingering doubts over the loss-making company’s path to profitability.

The stock, which had been priced at Rs 2,150, tumbled to Rs 1,955 at the start of a rocky day of trading on the Bombay Stock Exchange, before plunging to a low of Rs 1,564 at 3pm when trading was stalled after it struck the lower circuit breaker.

The circuit breaker is generally activated when the newly listed stock dips or rises by 20 per cent from the day’s opening price to give investors the chance to catch their breath. Narrower circuit-breaker thresholds are set for smaller stock issues.

Sharma eats at a roadside stall after the listing ceremony in Mumbai.
PTI Photo

CEO Vijay Shekhar Sharma, who cried with joy at the opening ceremony, later said he was unperturbed by the slide. “One day does not decide what our future is,” he said. “It is simply an opinion of a few buyers and sellers of that day.”

The comment failed to quell investor concerns that boiled over after foreign brokerage Macquarie put out a report that gave the stock an underperform rating and set a target price of Rs 1,200 — which implies a further 23 per cent fall from Thursday’s closing price and 44 per cent lower than the issue price.

Paytm, backed by China’s Ant Group and Japan’s SoftBank, cranked up its digital payments business after the Narendra Modi government’s controversial demonetisation exercise in November 2016. It famously courted controversy by taking out full-page advertisements with the Prime Minister’s photograph welcoming the decision to shred 86 per cent of all the currency circulating at that time and had to apologise for the unauthorised use of Modi’s picture.

Sharma and his deputy Madhur Deora bristled when grilled on a television channel about the Macquarie report which said loss-making Paytm would never make money unless it actually lent money and stopped being a mere distributor.

“We are not going to comment on a random report by a broker who is not in on the deal, probably does not understand our business model and has never spoken to us,” said Deora.

Sharma added: “People will take time to understand the business model. The fact that a payment company can do financial services like private insurance and wealth is something new to the Indian stock market.… Over the period, it will show up what this business model and scale is.”

He recalled that very few people understood how the digital payments system worked when Paytm was launched. Cab-hailing service Uber was among the first to accept Paytm payments.

Macquarie analysts Suresh Ganapathy and Param Subramanian said in their note that Paytm’s business model lacked focus and direction. They added that achieving scale and profitability would be a big challenge for the cash-guzzling company.

“Most things that Paytm does, every other large ecosystem player like Amazon, Flipkart, Google, etc, are doing. Paytm has to lend, i.e, use its own balance sheet to make loans and to do that profitably for which it needs a banking licence, credit underwriting experience and collection infrastructure all of which are lacking at present in our view,” the report said.

“Dabbling in multiple business lines inhibits Paytm from being a category leader in any business except wallets, which are becoming inconsequential with the meteoric rise in UPI payments. Competition and regulation will drive down unit economics and/or growth prospects in the medium term,” the brokerage report said.

Industrialist Anand Mahindra tweeted: “My heart goes out to individual IPO investors who must be rattled (by the stock price fall) but I’m sure Paytm will find its right level. There is, however, a silver lining to this sobering debut: it could moderate the casino-like feeding frenzy for IPO listings & help restore the hunt for true value.”

My heart goes out to individual IPO investors who must be rattled but I’m sure Paytm will find its right level. There is, however, a silver lining to this sobering debut: it could moderate the casino-like feeding frenzy for IPO listings & help restore the hunt for true value. https://t.co/TDDF4t2TCI

Paytm’s rout on debut fanned concerns about the fate of the IPO market which has attracted frenzied investment from people who have been fretting over paltry returns from traditional avenues of investment including bank deposits. It could now pose risks for rival Mobikwik and hotel aggregator Oyo as investors and brokerage start to scrutinise the numbers in the issue prospectus.