This year, for the first time since Independence, the budget documents will not be printed but will be uploaded on a website 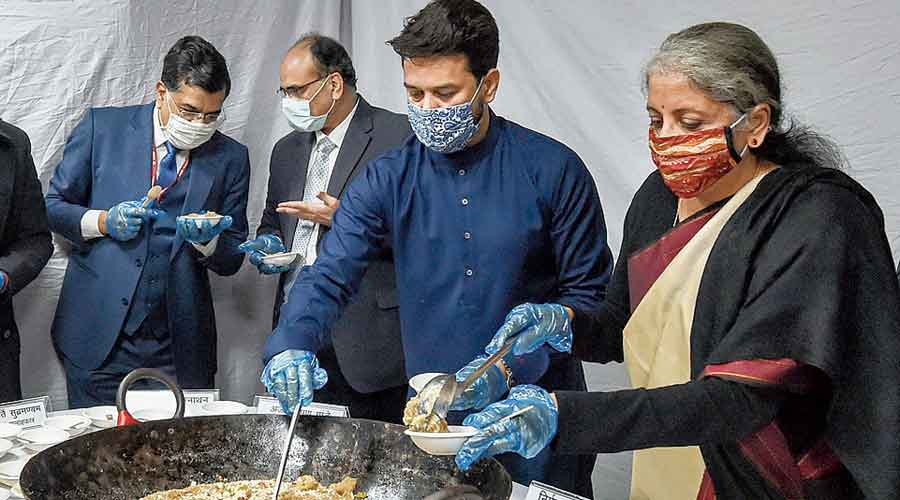 The countdown for the Union Budget 2021, to be presented on February 1, began with the traditional ‘Halwa ceremony’ in the North Block on Saturday.

A customary Halwa ceremony is performed every year before the “lock-in” process of the budget preparation begins.

On the occasion, finance minister Nirmala Sitharaman launched the “Union Budget Mobile App” for access to budget documents by members of Parliament (MPs) and the general public.

The general feeling among experts this year is that the budget should focus on demand side issues as the government has been busy fixing supply side concerns since March 2020 when the pandemic began to pummel the economy.

“It is high time to change gears and focus on the demand side as well, lest the ongoing recovery begins to lose steam. There is nothing wrong in addressing the supply-side issues, as it was necessary to augment the broken supply chains. But, lack of adequate demand may jeopardise the recovery and may even lead to a second-round impact,” Sunil Kumar Sinha of India Ratings warned in a note.

Sinha warned that even if the supply-side bottlenecks get restored on account of various government/RBI measures it may soon run into difficulties due to the lack of adequate demand for goods and services.

“The economy has shown some green shoots with several high frequency indicators reaching the pre-pandemic level of production, bolstered by a combination of festive/pent-up demand. But, after two consecutive months of positive growth, the factory output contracted in November, showing the fragility of the recovery. Therefore an appropriate demand-side measure therefore is as important as supply-side measures,” he said.

Expecting the Budget, to be tabled on February 1, to focus on boosting aggregate demand, expenditure reprioritisation and mobilising higher non-tax revenue, Sinha lists the following priorities.

During this period of isolation, the officials are not allowed to contact their families through phone or any other form of communication, such as e-mail, texts. Only very senior officials in the finance ministry are permitted to go home. Mobile phone jammers are installed to block phone calls. Internet connections of staff and senior officials are cut. Phone calls made through landlines installed are closely monitored. They will only emerge once the Finance Minister presents the Budget in Parliament.

During the "lock in" period, visitors are normally not allowed in the North Block, and if permitted, they are escorted by security personnel to the officer they wish to visit. Departments, which deal with taxation policies and which form the heart of the budget-making exercise, are kept under strict armed guard. A team of senior intelligence bureau officials keep watch on the denizens of the North Block and their visitors as well as on the regular security personnel.

Indications are that Bahi khata, the red bag reminiscence of the traditional account books, would give way to the laptop, symbolism of new digital India. She had in 2019 July discarded the colonial legacy of carrying the budget documents in a briefcase. The word ‘budget’ has its origin in the French word Bougette, which means leather briefcase.

Sitharaman also launched the “Union Budget Mobile App” for hassle-free access of Budget documents by Members of Parliament (MPs) and the general public.

The Budget documents will be available on the Mobile App after the completion of the Budget Speech by the Finance Minister in the Parliament. “The App has a user-friendly interface with embedded features of downloading, printing, search, zoom in and out, bidirectional scrolling, table of contents and external links, etc. It is bilingual (English & Hindi) and will be available on both Android and iOS platforms,” the official release said.

The App can also be downloaded from the Union Budget Web Portal (www.indiabudget.gov.in) and has been developed by the National Informatics Centre (NIC) under the guidance of the Department of Economic Affairs (DEA).

The Budget for FY22 will come against the backdrop of an economic contraction of 7.7 per cent, the first time in the history of independent India. So, all stakeholders have great expectations from the upcoming Budget, which could provide a healing touch to the pandemic-battered economy and push growth. Even the Finance Minister last month promised a ''never before'' like Union Budget to the people of India.