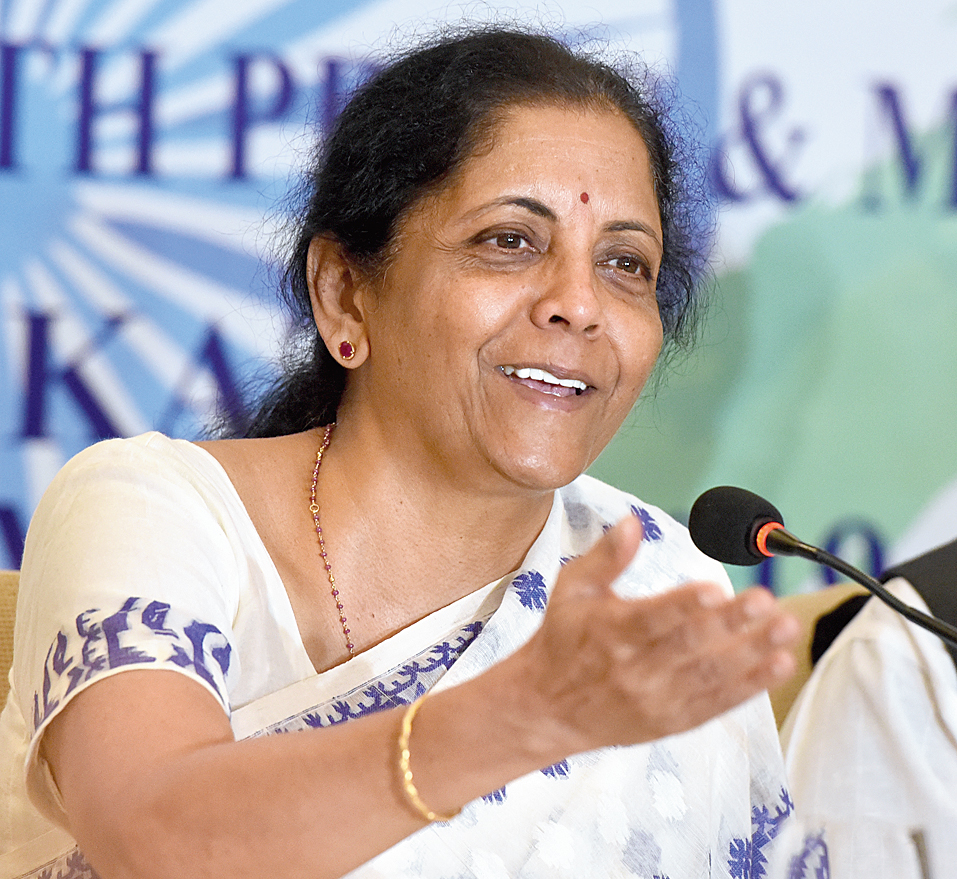 The Narendra Modi-government hinted at widening its effort to support the sagging economy after growth in the first quarter of this fiscal stuttered to a multi-year low at 5 per cent.

Union finance minister Nirmala Sitharaman said the government would not “underestimate” the needs of several industry sectors even though there was no cause for concern.

“No, not at all,” the FM said in her first interaction with the press after the first-quarter GDP growth figure was released a week ago, when asked if she was concerned about the growth number.

Sitharaman also reiterated that even if revenue collections were low, social sector spending would not be affected.

The minister met the revenue department officials of the eastern region and 15 chambers of commerce and trade bodies, separately, as part of the government’s country-wide outreach programme to understand the concerns of industries.

“I am not trying to underestimate the requirements of the various sectors... we shall look at that, we shall extend all benefits,” Sitharaman said in her maiden visit to the city after assuming charge as the finance ministry.

However, she declined to admit that growth was down to a decade’s low. “I don’t think it (growth rate) is the lowest in 10 years. If you go back to history, you will see that in 2012-13 there was a dip and the economy rose. Then, too, the finance minister had commented that there was no need for pessimism,” she said.

There has been rising concern in the country over the state of the economy as a lack of consumer confidence has led to lower consumption of goods and services. Automobiles, along with several other sectors such as real estate and construction, has been badly hit.

The FM said the government would continue to engage with different sectors and come up with another set of announcements.

On August 24, the government rolled back the higher surcharge on foreign portfolio investors, a Union budget move that spooked the stock markets. It also announced a few measures for the automobile industry such as accelerated depreciation on vehicles and deferment of the one-time registration fee.

The finance minister had then said that the government would announce at least one more set of measures. A week later, the merger of 10 PSU banks were announced even as the widely anticipated sops on real estate and construction are yet to come.

During her brief interaction with the industry associations, such as the Indian Chamber of Commerce, the Bharat Chamber of Commerce and the trade bodies, several requests were made regarding interest paid on delayed GST payment and the plight of the real estate sector.

The FM, who was accompanied by revenue secretary Ajay Bhushan Pandey, and the chairmen of direct and indirect taxes, noted down the suggestions but did not make any commitment. “We need action. If the economy has to reach $5 trillion in five years, just listening to industry grievances would not do,” a member of a Calcutta-based chamber said.

FM reiterated measures to bring transparency in tax administration. “One of the things that we are now bringing which shall start from October itself is when a notice is issued to an assessee, either an amount which is due from them or something that is undisclosed, that notice will have to be now issued with a particular document identification number (DIN). Unless it is there, the assessee is well within its right to treat the notice itself as not issued at all. That will enable a centralised process which will know that the notice is getting issued in a way the system approves it. So it is not at the discretion of somebody who is sitting in an office comissionerate somewhere who thinks he wants to issue a notice to an assessee and have the fun afterwards,” she added.